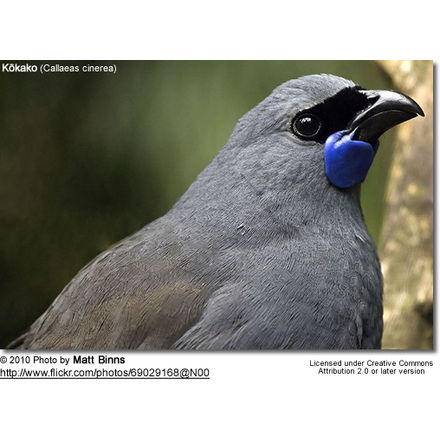 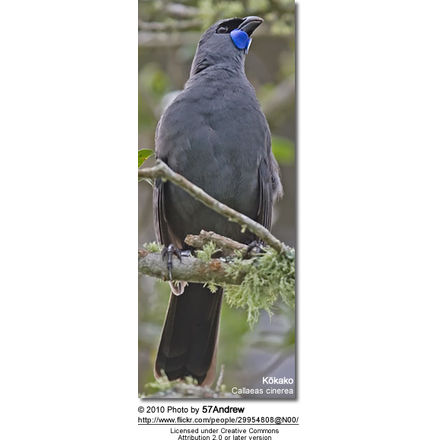 The K?kako (Callaeas cinerea) is a forest bird which is endemic to New Zealand. It is slate-grey with a black mask and wattles. It is one of three species of New Zealand Wattlebird, the other two being the endangered Tieke (saddleback) and the extinct Huia. Previously widespread, K?kako populations throughout New Zealand have been decimated by the predations of mammalian invasive species such as possums, stoats, cats and rats and their range has contracted significantly. There were formerly two sub-species of K?kako, North Island and South Island, although the South Island subspecies may now be extinct.

The K?kako has a beautiful, clear, organ-like song. Its call can carry for kilometres. Breeding pairs sing together in a bell-like duet for up to an hour in the early morning. Different populations in different parts of the North Island (if any populations of the South Island K?kako remain they are at present unknown) have distinctly different songs which many people consider analogous with human “dialects” of a given language.

The K?kako is a poor flier and seldom flies more than 100 metres. The wings of this species are relatively short and rounded. It prefers to hop and leap from branch to branch on its powerful grey legs. It does not fly so much as glide and when seen exhibiting this behaviour they will generally scramble up tall trees (frequently New Zealand podocarps such as rimu and matai) before gliding to others nearby. Its ecological niche is frequently compared to that of a flying squirrel. Its diet consists of leaves, fern fronds, flowers, fruit and invertebrates. 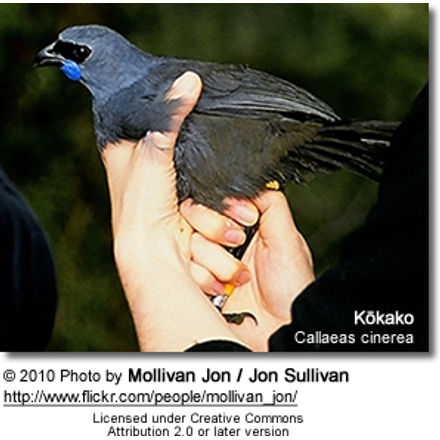 M?ori myth refers to K?kako in several stories. In one notable story, K?kako gave M?ui water as he fought the sun by filling its plump wattles with water and offering it to M?ui to quench his thirst. M?ui rewarded K?kako for its kindness by stretching its legs until they were lean, long and strong, so that K?kako could easily leap through the forest to find food.

The K?kako appears on the reverse side of the New Zealand $50 note.

The North Island Kokako is endangered, with less than 400 pairs in existence (September 2004). It survives in low numbers in several mainland native forests with the help of government-funded pest control programmes, and captive breeding programmes help maintain population numbers. New populations are being established through releases on predator-free offshore islands. As a result, conservationists are hopeful of the species’ long-term survival. As at 2005, the K?kako has been sighted in Pureora Forest, Whirinaki Forest Park and the Te Urewera National Park. Recently, 20 K?kako from Urewera were translocated to Ngapukeriki, a forest area under intensive predator control. K?kako can be seen relatively easily on Tiritiri Matangi Island, where the regenerating forest is low enough to provide close views

The South Island Kokako has fared worse and was formally declared extinct by the New Zealand Department of Conservation on 16 January 2007 . A confirmed sighting has not occurred in several decades, though unconfirmed sightings are very occasionally reported, most recently several reports of sighting have and witnesses interviewed claim DOC asked them to keep it quiet. In the 1990s, Timberlands, the state owned enterprise tasked with managing the former New Zealand Forest Service’s West Coast forests found some evidence of kokako in the research into native forest ecology it conducted as part of its sustainable management program. 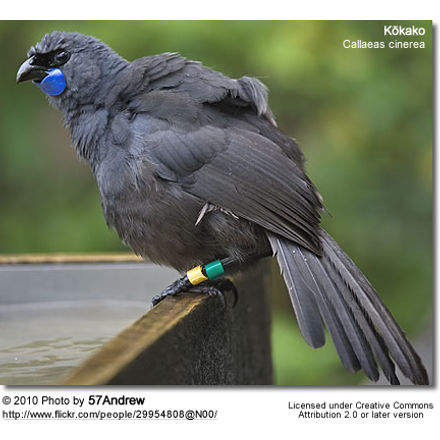 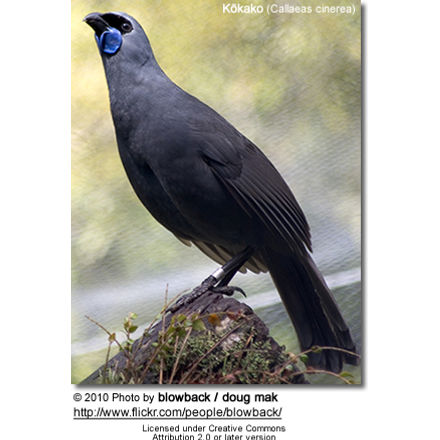