The Kookaburras (genus Dacelo) are native to Australia and New Guinea. They are from the family Kingfishers and inhabit woodland areas of Eastern and Southwestern Australia.

There are five species of Kookaburras: 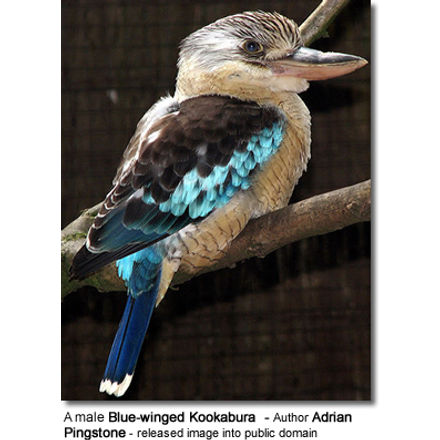 Their habitats range from open, humid forests and woodlands to arid savannahs, and some are even being seen in residential areas near running water and easily found food sources. They are also known to dwell in cultivated parks and gardens.

Kookaburras are given the nickname, the Laughing Jackasses of Australia. Similar to their counterparts, the Kingfishers, Kookaburras have a sturdy, solid body, a short neck, a long, stout bill with a pointed tip, and short, strong legs.

Kookaburras range from large to very large in size, with the largest being 28–42 cm (11–17 in).
All kookaburras are sexually dimorphic, meaning the male and female have noticeable differences. But this is only obvious in the Blue-winged and the Rufous-bellied; the males have blue tails and the females have rufous tails. 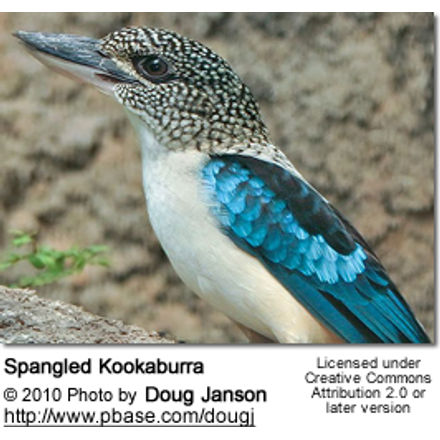 Kookaburras have found favor with the Australians since they are not only a unique and captivating species, but these carnivores contribute to the ecology by feeding on snakes and lizards. When it hunts, the kookaburra waits patiently on a branch and then pounces on its prey when it comes into view. Dropping straight down, it folds its wings back and extends its beak, ready to capture its meal. It then returns to its perch to eat.

The Kookaburra captures snakes behind the head and kills them by dropping them from a height. Sometimes, like the Kingfishers, it carries the prey to a perch and batters it with its strong bill against a rock or tree to kill and soften it before swallowing it. An unusual fact about Kookaburras is that their crops are not in the usual place for birds, which is just below the neck. The Kookaburras’ crops are low in their bodies, between their legs. This makes sense when one considers that the birds eat such large prey whole.

Kookaburras enjoy a wide variety of prey. They will feed on insects, fish, mice and other rodents, raw meat, worms, beetles, lizards and other small reptiles. They prefer a variety of insects and other invertebrates.
Unfortunately, they are a problem for the farmers. The will raid farmyards for the young ducklings and chicks.
Some have become quite social, taking whatever raw or cooked meat is left outside, even if it is on a barbecue grill!

While most Kingfisher species prefer to live alone, seeking a mate only during breeding season, Kookaburras live in groups. Some, such as the Laughing Kookaburras and Blue-winged Kookaburras, live in family groups made up of the parents and their older offspring, which assist in the raising of the new chicks.

Most of these assisting family members are males. Unlike the others, The Rufous-bellied Kookaburra lives either with its mate alone or within a small group in open woodland. Little is known of the nesting habits of the Spangled Kookaburra.

The Kookaburra uses its call to claim its territory and the boundaries of that territory, singing as a chorus to accomplish this. It remains in its territory for most of its life, raising its young there. A monogamous species, it forms permanent pair bonds and will remain with that mate for the rest of its life.

Breeding season begins in September and ends in January. They build their nests in hollow tree trunks, tree holes, on the ground, or in excavated termite mounds. The nests are usually no more than 12 meters from the ground.

The female will then lay 1 to 4 white, round eggs without having made use of any nesting materials. The entire family assists in incubating the eggs and feeding and protecting the young.

Rather than being pushed out of the area upon reaching adulthood, the young remain to assist their parents in defending the territory and raising and protecting the nest and future chicks.

Both parents share in the 25-day incubation effort. At 30 days, the young leave the nest, but the parents continue to provide food for them for yet another 40 days.

Because it takes such a long time to rear the young, it is unlikely that the pair will have more than one clutch in a breeding season. Their low birth rate is a reflection of the longevity of the Kookaburras; thus, population replacement is a slow process.

Occasionally, Kookaburras have exhibited defensive or aggressive behavior towards humans, but most people find their habit of attacking windows or exterior surfaces of the home to be more annoying.

Generally the bird is responding to the sight of his reflection in a window. No one is sure why these birds continue to peck at the surfaces on the outside of the house.