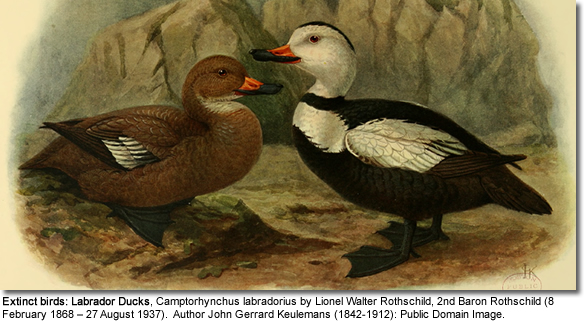 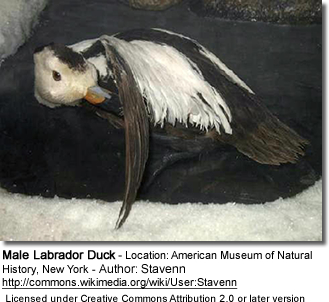 The Labrador Duck, Camptorhynchus labradorius, was a striking black and white eider-like sea duck that was never known to be common, and is believed to be the first bird to go extinct in North America after 1500.

The last Labrador Duck is believed to have been seen at Elmira, New York on December 12, 1878; the last preserved specimen was shot in 1875 on Long Island. It was thought to breed in Labrador, although no nests were ever described, and it wintered from Nova Scotia to as far south as Chesapeake Bay.

The Labrador Duck was also known as a Pied Duck, a vernacular name that it shared with the Surf Scoter and the Common Goldeneye (and even the American Oystercatcher), a fact that has led to difficulties in interpreting old records of these species, and also as Skunk Duck. Both names refer to the male’s striking white/black piebald coloration. Yet another common name was Sand Shoal Duck, referring to its habit of feeding in shallow water. The closest evolutionary relatives of the Labrador Duck are apparently the scoters (Melanitta) (Livezey, 1995). 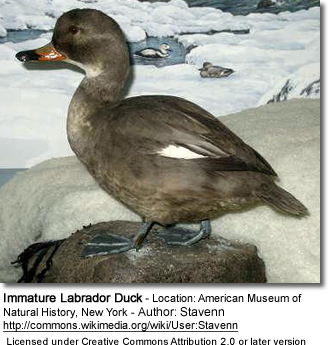 The Labrador Duck fed on small mollusks, and the structure of the bill was highly modified from that of most ducks, having a wide, flattened tip with numerous lamellae (miniature ridges inside the bills of water-feeding birds or “teeth”) inside. In this way it is considered an ecological counterpart of the North Pacific/North Asian Steller’s Eider. Another, completely unrelated, duck with similar (but even more specialized) bill morphology is the Australian Pink-eared Duck, which feeds largely on plankton, but also mollusks; the condition in the Labrador Duck probably resembled that in the Blue Duck most in outward appearance.

The extinction of the Labrador Duck is still quite unexplained. Although hunted for food, this duck was considered to taste bad and rot quickly and fetch a low price; consequently, it was not sought much by hunters. Alternatively, it is thought that the eggs may have been over-harvested, and it may have been subject to depredations by the feather trade in its breeding area as well. Another possible factor in the bird’s extinction was the decline in mussels and other shellfish on which they are believed to have fed in their winter quarters, due to growth of population and industry on the Eastern Seaboard. Although all sea ducks readily feed on shallow-water mollusks, no Western Atlantic bird species seems to have been dependent on such food as much as the Labrador Duck (Bangs in Phillips, 1926).