The Large Woodshrike (Tephrodornis gularis, the name T. virgatus provided as a substitute on insufficient grounds) is a species in the helmetshrike family Prionopidae. The woodshrikes were formerly placed in the Campephagidae (cuckooshrikes) sometimes. 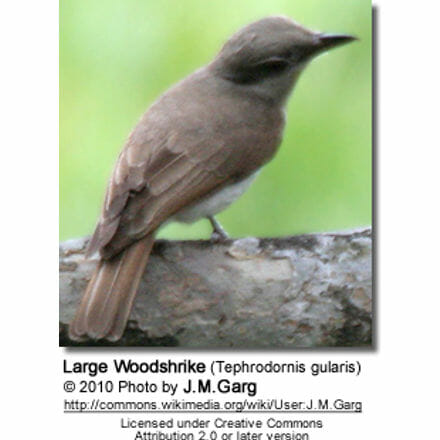 The subspecies in south-west India is sometimes considered a separate species, the Malabar Woodshrike (T. sylvicola).

The name Lanius gularis was described by Raffles in 1822 (Transactions of the Linnean Society). At about the same time (1824), Temminck published the name Lanius virgatus in his Planches Coloriees (pl. 256, f.1).

These, among other related forms, were later placed in the genus Tephrodornis and each recognized as valid species. Richard Bowdler Sharpe (Catalogue of the Birds in the British Museum, vol. III, p. 278) retained both as valid, and this treatment perpetuated as recently as 1981 (Smythies, Birds of Borneo).

Further review determined that both gularis and virgatus should be recognized as one species, with the former name designated as the nominate.

Dickinson and Dekker discussed the homonymy of Raffles’ name, and on the premise that it was unavailable, supplanted it with Temminck’s name as the authority. A more obscure Lanius gularis was published in Bechstein (Kurze Uebersicht aller bekannten Vögel oder ihre kennzeichen der Art nach Latham’s General Synopsis of Birds und seinem Index ornithologicus, (1811), eleven years prior to Raffles.

Since the discovery of the homonymy in 2002, the name virgatus seems to have prevailed as the correct name for the large wood-shrike. However, the action to replace gularis was not justified. In the fourth edition of the International Code of Zoological Nomenclature (1999) certain provisions were modified, including the adoption of “reversal of precedence.”

Since the discovery of the homonymy was published subsequent to the fourth edition of the Code, these requirements would need to be met prior to making such a change. Bechstein’s name (the senior homonym) being so obscure–having only been cited once prior to Dickinson and Dekker (Index Animalium of Sherborn (and its corresponding reverse index volume)–that the act to adopt virgatus was done on insufficient grounds.

Further, it is uncertain as to which species Bechstein’s name should be indicated as a synonym of. Therefore, the correct name of the large wood-shrike is Tephrodornis gularis.