The Laughing Kookaburras (Dacelo novaeguineae) are Australian kingfishers that were named for their laughing calls.

In the past, it has been given the nicknames, the “Laughing Jackass” and the “Giant Kingfisher.” Its name comes from the Aboriginal language of the extinct Wiradhuri tribe.

Kookaburras occupy open woodland territories, forests and land on the edges of plains. It is the largest member of the Kingfisher family.

The Laughing Kookaburras are indigenous to the woodlands of Eastern mainland Australia, but they have also been introduced to Western Australia, Tasmania, Flinders Island, Kangaroo Island, and New Zealand.

The Laughing Kookaburra prefers the mature trees in the woodlands, especially in the dry eucalyptus forests; however, it is a frequent guest in urban parks and gardens. Its territory is based on the availability of a consistent food supply and safe nesting sites.

Kookaburras can live 10 to 12 years in the wild, and they are not threatened or endangered. They remain in their territories year-round. 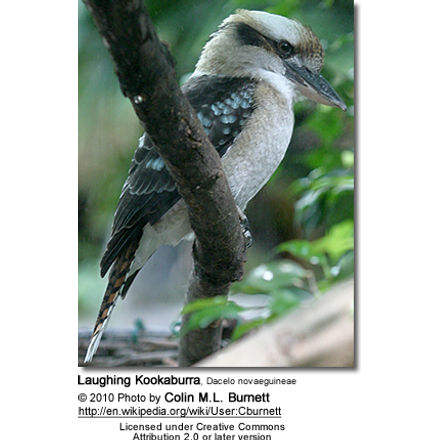 A familiar bird in its habitats, the Laughing Kookaburra is easily identifiable by its plumage, mainly shades of brown and white. This makes for excellent camouflage to protect it from its predators and hide it from its prey. Its head and bill are both large, and its eyes are brown.

Its stocky, solidly built body is about 45 cm (18 in) long, from beak to tail, making it one of the most sizeable species in the Kingfisher family.

The boat-shaped bill is bi-colored; the maxilla, or top part, is blue, and the lower part, or mandible, is a pale pink.

The sexes are dimorphic yet very similar. The female is larger than the male, and her rump contains fewer blue markings than the male’s. The body is cream-colored, and there is a dark brown stripe running through each eye and across the top of the beige-colored head.

Another brown stripe runs from the eye to the back of the head on the side. Both the back and the wings are brown, although the wings include sparkling sky-blue markings on the shoulders. The tail is rufous reddish-orange with dark brown bars and white tips on the feathers. 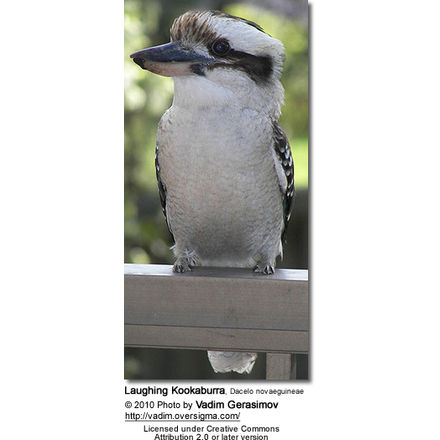 The name “Laughing Kookaburra” has been bestowed on this bird due to its call. Their vocalizations establish the boundaries of their territory to other family groups. It can be heard at any time, but is most audible at dawn and dusk.

A single bird will start the call with a subtle, chuckling sound, something like a hiccup. Before long, he is throwing his head back and making a cackling, raucous laugh, inviting the rest of the group to join him. Soon the entire family is creating an ear-splitting din that can be heard for miles in all directions.

Other neighboring families hear this and respond; soon the bush is filled with a cacophony of ringing laughter, complete with a variety of trills, chortles, belly laughs, and hoots.

Newcomers to the bush are often taken aback by this sound, but to most it is an amazing experience. The Laughing Kookaburra is known as the “Bushman’s Alarm Clock” because of the timing and regularity of its call.

The birds produce other calls which are different and used for other purposes. These shorter calls serve to call members of the flock, raise alarms and show aggression. Some calls are used in courtship and in feeding rituals.

Laughing Kookaburras hunt much as their relatives, the Kingfishers, do—by perching on a nearby branch and waiting patiently for prey to pass by. They will pounce on their pray, dropping straight down from the perch, wings back, beak ready to impale the prey.

They feed on mice and similar-sized rodents, small mammals, fish, large insects, beetles, worms, lizards, frogs, small birds and nestlings, and snakes. When there are plagues of grasshoppers or mice, their diet consists almost exclusively of these animals.

Although smaller prey are easier to consume, they will not hesitate to target larger animals, including venomous (poisonous) snakes much longer than their bodies. This explains why their crops are low in their bodies, between their legs!

Large prey creatures like lizards and snakes are bashed against a tree or a rock to kill them and soften them up before they are eaten. The birds will sometimes drop snakes from high altitudes onto the ground in order to break the bones and prepare it for consumption. The prey is swallowed headfirst and whole.

Laughing Kookaburras are a common sight in suburban gardens and urban settings, even in built-up areas, and are so accustomed to humans that they will often eat out of their hands.

Many people have had their dinner snatched from the table or off their grills by this species. They will swoop in, startling the people, grab the meat and be gone in seconds. Some people have even deliberately fed them raw meat! 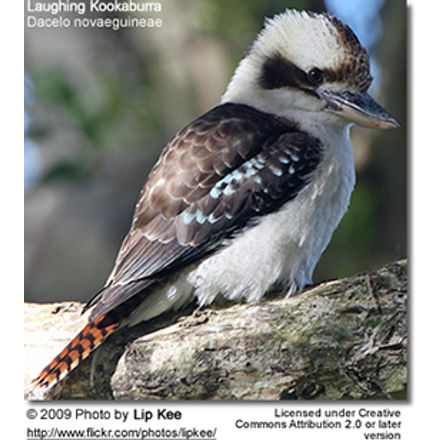 During Australia’s spring mating season—October—the Laughing Kookaburra engages in elaborate courtship behavior. Since they spend their entirely lives in the same territories, adults use the same tree hollow or arboreal termite nest each year.

These birds are monogamous, mating for life. They have a complex social system in which only the dominant pair breeds.

The extended family remains in the nest or nearby to assist in the rearing of the young and protection of the nest.

The female adopts a begging posture and vocalizes like a young bird. About six weeks before eggs are laid, the male offers her his meal and courts her with an “oo oo oo” sound.

The clutch usually consists of three eggs laid at 2-day intervals. If the parents cannot provide sufficient food, the third chick will not be fed or will not grow adequately. If food is plentiful, the parent birds spend more time brooding the chicks, thus preventing quarrels among the chicks.

If the first clutch is unsuccessful, the pair will breed again during the summer.

The chicks are ready to fledge 33 to 39 days after they hatch, but will continue to be fed by the extended family for another 8 weeks. The parents will usually only raise one clutch per year. At about four years of age, the helpers leave to establish their own territories.

The first hatching of Laughing Kookaburras in the Western Hemisphere occurred at the San Diego Zoo in 1961.