The Lesser Redpoll, Carduelis cabaret, is a small passerine bird belonging to the genus Carduelis in the finch family, Fringillidae.

It is the smallest, brownest and most streaked of the redpolls.

It is often classified as a subspecies of the Common Redpoll, Carduelis flammea, but has recently been split from that species by several authorities such as the British Ornithologists’ Union.

It is native to Europe and has been introduced to New Zealand. Many birds migrate further south in winter, but the mild climate means that it can be found all year round in much of its range, and may be joined by the other two redpoll species in winter.

The bill is short, conical and sharply pointed and is pale yellow with a dark tip. The adult male is largely brown above with darker streaks. It has a red forehead, a black chin and, during the breeding season, pink on the breast and face.

The flanks are buff with dark streaks and the belly and undertail-coverts are whitish. There are two pale bars on the wing.

The adult female is similar but lacks the pink on the breast and face and has less streaking on the flanks.

The juvenile has a pale head with no red forehead and less black on the chin.

The commonest call is a harsh, metallic, staccato chuch-uch-uch-uch given in flight or while perched. It also has a plaintive alarm call. The trilling song combines the flight call with a buzzing rattle and is often given in an undulating song-flight around the territory..

The Mealy Redpoll is similar to the Lesser Redpoll but larger and paler with whiter underparts. The upperparts are more buff and the rump is pale with dark streaks. 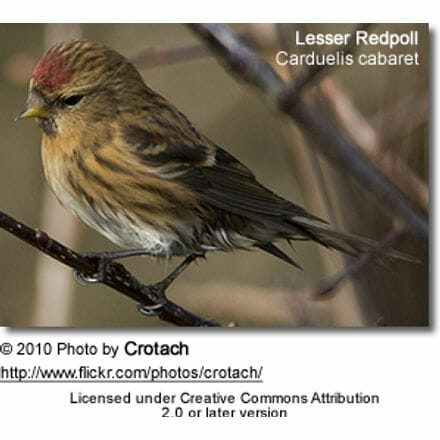 It was formerly almost restricted to Great Britain, Ireland and the Alps but its range has expanded considerably across central and northern Europe in recent decades. It is a widespread breeding bird in Britain and Ireland although absent from parts of southern and central England.

It nests along the North Sea coast from north-east France to Germany and has spread into Denmark, southern Norway and south-west Sweden. The Alpine population has increased and spread into neighbouring regions. The bird now nests as far east as southern Poland, Slovakia and northern Romania.

It is a short-distance migrant with many birds spending the winter within the breeding range. Alpine birds often move to lower elevations. In Britain, it becomes more widespread in lowland areas in winter. Some British birds move south to mainland Europe, occasionally reaching as far as Iberia.

This species was first introduced to New Zealand in 1862 as part of shipment of birds to Nelson. Several further introductions followed and it has become widely established.

It is most common on the South Island and at higher altitudes and has colonised many offshore islands. It has spread to the Australian territory of Macquarie Island and has occurred as a vagrant to Lord Howe Island.

It inhabits open woodland, scrubland, farmland and dunes. Its spread has been aided by an increase in conifer plantations. 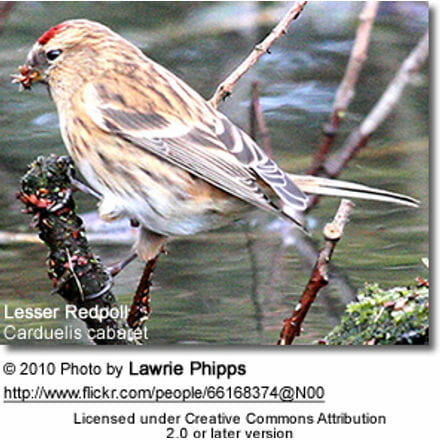 It is a sociable bird which usually forages in flocks. It mainly feeds in trees but also feeds on the ground, especially in winter as the supply of seeds becomes reduced. The diet is mostly composed of small seeds such as those of birch, alder and grasses. Fruit buds and invertebrates are also eaten.

Breeding pairs form in late winter. The breeding territory and several pairs will often nest close together in a loose colony. The cup-shaped nest is built by the female, usually in a shrub or tree. It is made of twigs and plant stems with an inner layer of roots, grass, moss, leaves and other vegetation and a lining of feathers, wool and hair.

Two to seven eggs are laid. They are pale bluish or greenish with reddish or brownish blotches and streaks. The female incubates the eggs for 10–15 days while being fed by the male. The young birds are fed by both parents and fledge after 9–15 days.

The relationships among the redpolls are unresolved. The Lesser Redpoll co-occurs with the Mealy Redpoll (subspecies flammea of the Common Redpoll) in southern Norway, apparently without significant interbreeding though sympatry was established too recently to draw firm conclusions.