The Little Auks, or Dovekies (Alle alle) are a small auk, the only member of the genus Alle. They breed on islands in the high Arctic. Little Auks produce a variety of twitters and cackling calls at the breeding colonies, but are silent at sea. 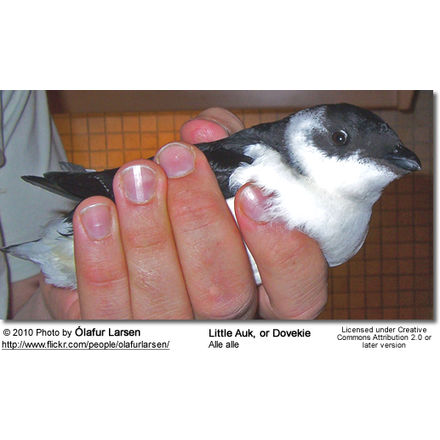 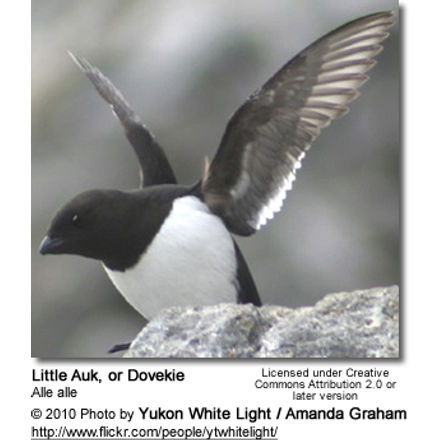 The Little Auk, or Dovekie (Alle alle) is a small auk, the only member of the genus Alle. It breeds on islands in the high Arctic.

This is the only Atlantic auk of its size, half the size of the Atlantic Puffin at 19–21 cm in length, with a 34–38 cm wingspan.

Adult birds are black on the head, neck, back and wings, with white underparts. The bill is very short and stubby. They have a small rounded black tail. The lower face and fore neck become white in winter.

The flight is direct, with fast whirring wing beats due to the short wings. These birds forage for food like other auks by swimming underwater. They mainly eat crustaceans, especially copepods, but also other small invertebrates along with small fish. They collect in large swarms before leaving their breeding rocks to head out to sea for food as well as when they return.

Little Auks produce a variety of twitters and cackling calls at the breeding colonies, but are silent at sea. 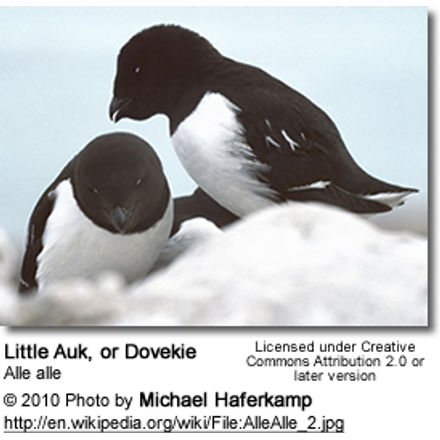 Their breeding habitat is coastal mountainsides, where they have large colonies. They nest in crevices or beneath large rocks, usually laying just one egg. They move south in winter into northern areas of the north Atlantic. Late autumn storms may carry them south of their normal wintering areas, or into the North Sea.

In the book, The Long Winter, Laura Ingalls Wilder writes of her father finding a small bird that looked just like a Great Auk hidden in a haystack after an early October blizzard when the family lived near De Smet, South Dakota around 1880. The family never did find out what it was, but it appears to have been a Little Auk, blown south by the autumn blizzard.

The Little Auk’s prey are chiefly crustacean. The Glaucous Gull and the Arctic Fox are the main predators on Little Auks, and, in some cases, the Polar Bear has also been reported to feed on their eggs.

Large numbers of Little Auks have been killed in several oil-spill incidents. but climate changes (warming) in Southern Greenland and Iceland seems to be the reason for the decreasing populations there. 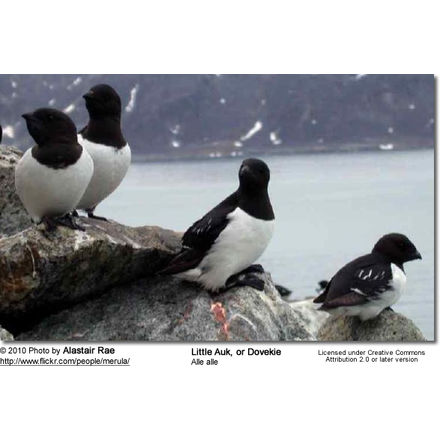 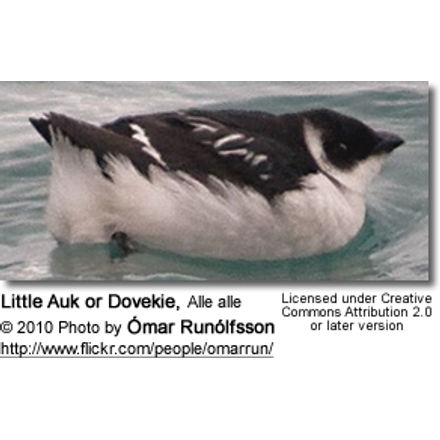