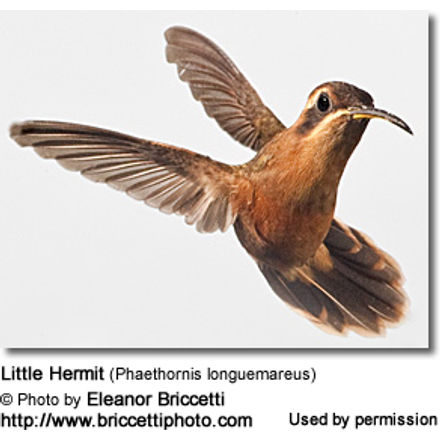 The Little Hermit (Phaethornis longuemareus) – also known as Longuemare’s Hermit – is a small South American hummingbird that is found in north-eastern Venezuela, northern Guyana, Suriname, French Guiana and Trinidad. It is fairly common within its range.

They occur in low and middle elevation forests, on Caribbean and Pacific slopes; where they inhabit semi-open wooded habitats, mangroves, secondary forests, plantations, scrubland as well as gardens. They usually stay close to water and favored feeding areas. In Trinidad, they are also found in the rainforest.

Its black bill is long and slightly down-curved; the upper beak is black and the lower is yellow with a black tip.

The Little Hermit has black and light facial stripes. The male’s throat is slightly darker than the female’s.

The upper plumage is olive-green with orange or cinnamon-colored upper-tail coverts (feathers) . The under plumage is also a cinnamon color with a greyish tint it. Its tail is brownish with whitish tips. 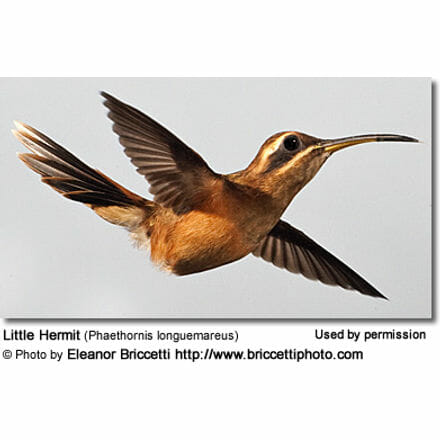 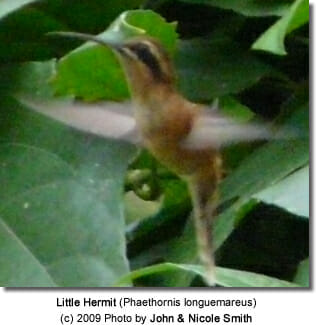 Male will perform in communal leks (competitive mating displays or dancing grounds) where they sing and flash their tails to attract the females.  Their display may entail wiggling of their tails and singing. Willing females will enter the area for the purpose of choosing a male for mating. Oftentimes she will choose the best singer.

The female is responsible for building the cone-shaped nest out of plant fibers woven together and green moss on the outside for camouflage in a protected location in a shrub, bush or tree or she may attach her .

The female is responsible for building the remarkable cone-shaped nest which hangs by a single strong string of spiders’ silk and/or rootlets from some overhead support, which could be a branch or the underside of the broad leaves of, for example, Heliconia plants, banana trees or ferns about 3 – 6 ft (1 – 2 m) above ground. However, these unusual nests have been found beneath bridges, in highway culverts and even hanging from roofs inside dark buildings. The nest is often near a stream or waterfall. It is constructed out of plant fibers woven together and green moss on the outside for camouflage in a protected location. She lines the nest with soft plant fibers, animal hair and feather down, and strengthens the structure with spider webbing and other sticky material, giving it an elastic quality to allow it to stretch to double its size as the chicks grow and need more room.

She lays 1 to 3 white eggs (average 2) – which she incubates alone for about 14 to 16 days. The young are born blind, immobile and without any down.

The chicks are brooded only the first week or two, and left alone even on cooler nights after about 12 days – probably due to the small nest size. The chicks leave the nest when they are about 20 – 23 days old. 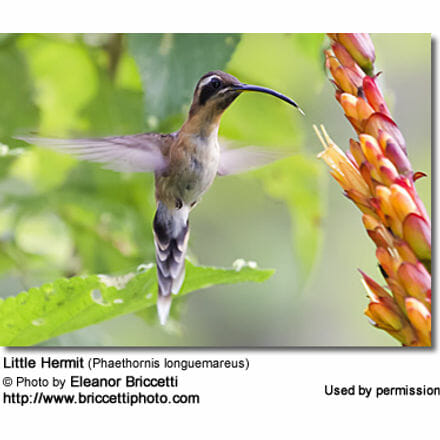 The Litte Hermits primarily feed on nectar taken from a variety of seasonal, brightly colored, scented, large flowers of trees, shrubs and epiphytes – with their favorite feeding plant being the broad-leafed Heliconia plant.

Hermits are “trap-line feeders” which means that they visit plants along a long route (in this case of up to 0.6 miles or 1 km) – as opposed to most other hummingbird species who are highly territorial and will aggressively protect, those areas containing flowers with high energy nectar.

They favor flowers with the highest sugar content (often red-colored and tubular-shaped) and seek out, and aggressively protect, those areas containing flowers with high energy nectar.They use their long, extendible, straw-like tongues to retrieve the nectar while hovering with their tails cocked upward as they are licking at the nectar up to 13 times per second. Sometimes they may be seen hanging on the flower while feeding.

The Little Hermit is now considered monotypic (a genus consisting of only one species). Previously, several other small hermits were considered its subspecies – but they are now regarded as separate species. These are: