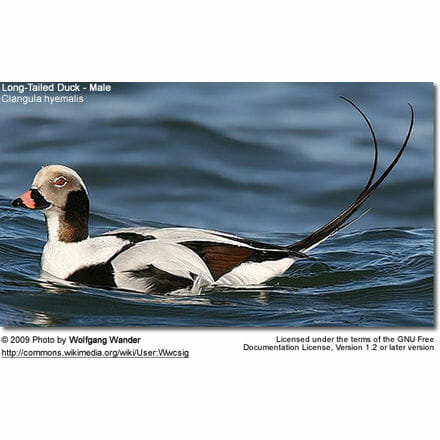 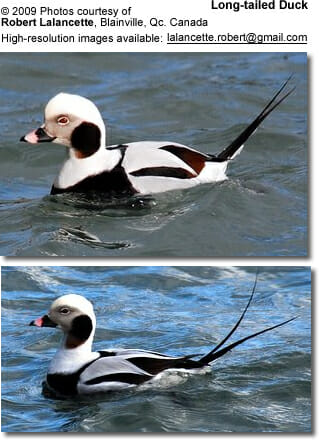 The Long-tailed Duck (Clangula hyemalis) aka Oldsquaw – is a medium-sized sea duck.

It is the only member of its genus, Clangula; this was formerly used for the goldeneyes, with the Long-tailed Duck being placed in Harelda. An undescribed congener is known from the Middle Miocene Sajóvölgyi Formation (Late Badenian, 13-12 mya) of Mátraszõlõs, Hungary (Gál et al. 1998-99).

In North American English it was formerly called Oldsquaw, though this name has fallen out of favour under influence of negative connotations of the word squaw in English usage. Some biologists have also feared that this name would be offensive to some Native American tribes involved in the conservation effort. The American Ornithologists’ Union (2000) stated that “political correctness” was not sufficient to change the name, but “to conform with English usage in other parts of the world”, it officially adopted the name Long-tailed Duck.

Adults have white underparts, though the rest of the plumage goes through a complex moulting process.

The male has a long pointed tail (10 to 15 cm) and a dark grey bill crossed by a pink band. In winter, the male has a dark cheek patch on a mainly white head and neck, a dark breast and mostly white body. In summer, the male is dark on the head, neck and back with a white cheek patch 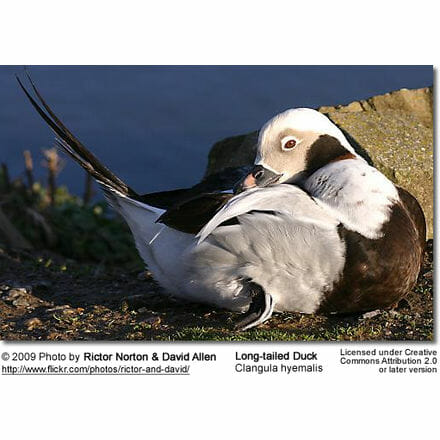 The female has a brown back and a relatively short pointed tail. In winter, the female’s head and neck are white with a dark crown. In summer, the head is dark. 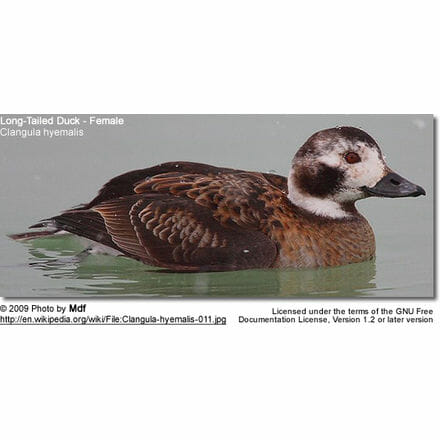 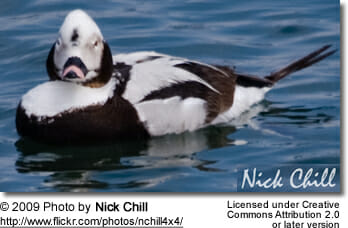 Their breeding habitat is in tundra pools and marshes, but also along sea coasts and in large mountain lakes in the North Atlantic region, Alaska, northern Canada, northern Europe and Russia. The nest is located on the ground near water; it is built using vegetation and lined with down.

They are migratory and winter along the eastern and western coasts of North America, on the Great Lakes, coastal northern Europe and Asia, with stragglers to the Black Sea. The most important wintering area is the Baltic Sea, where a total of about 4.5 million gather.

The Long-tailed Duck is gregarious, forming large flocks in winter and during migration.

The Long-tailed Duck is one of the species to which the Agreement on the Conservation of African-Eurasian Migratory Waterbirds (AEWA) applies.

They feed by diving for mollusks, crustaceans and some small fish. Although they usually feed close to the surface, they are capable of diving to depths of 60m (200 feet).

The males are vocal and have a musical yodelling call Ow, ow, owal-ow.

Copyright: Wikipedia. This article is licensed under the GNU Free Documentation License. It uses material from .

Long-tailed Ducks feed by diving and swimming underwater. Their main diet consists of mollusks, crustaceans and various small fish. Although they usually feed close to the surface, they are capable of diving to depths of 60m (200 feet).