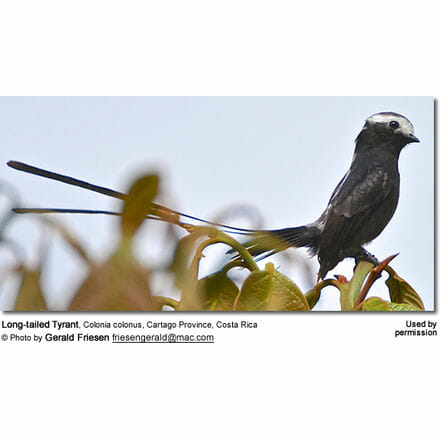 They inhabit subtropical or tropical moist lowland and moist montane evergreen forests, as well as heavily degraded former forest. They are most commonly seen at the edges of forests, near or on dead trees or exposed branches from which they catch flying insects.

The Long-tailed Tyrants are mostly resident; except for southern populations that migrate during the austral winters.

The plumage is dull black, except for the conspicuous white crown, forehead and the white patch on the rump.

They mostly feed on flying insects, such as stingless bees. Insects are caught during quick flights, and the Long-tailed Tyrants will often return to the same perch.

They build their nests in tree cavities 26 – 98 feet (8 – 30 meters) above ground. The average clutch consists of 2 – 3 eggs. The female will roost in the nest box for weeks before egg laying. The pair will aggressively defend their nests against intruders.