The Lucifer Hummingbird (Calothorax or Trochilus lucifer) – also known as Lucifer Sheartail – belongs to a group of hummingbirds commonly referred to as “sheartails.” They are named for their deeply forked and narrow tails.

They are native to Mexico, with some breeding activities occurring as far north as southern United States. 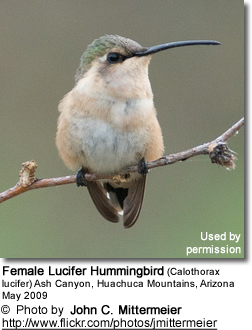 They breed in the central southern United States from March to September. Specifically, they are found in southeast Arizona, southwest New Mexico and west Texas –  mostly at elevations of about 3,500–5,500 feet (~ 1,000 – 1,600 m).

They are most commonly sighted during the summer (breeding season) in Ash and Cave Creek Canyons; Huachuca, Chiricahua, Mule and Santa Rita Mountains, or near Portal, Arizona (located at the mouth of Cave Creek Canyon on the east side of the Chiricahua Mountains) in southeast Arizona. They are particularly common in agave-covered foothills.

In Texas, they are often seen near flowering agaves in Big Bend National Park and in the Davis Mountains.

They occur on the Central Mexican Plateau (also known as the Mexican Altiplano or Altiplanicie Mexicana), Jalisco and Michoacan (Western Mexico) and Puebla (east central Mexico).

The habitats vary widely depending on the geographic location. Although they are found in the plains, canyons, foothills and on the sides of rocky hillsides, they generally favor deserts and arid areas. During the breeding season, its range is usually restricted to dry, open habitats.

They are most easily found near their favorite feeding and nesting plants, such as agave (century plants), ocotillo, cholla and sotol shrubs and cacti.

The Lucifer Hummingbirds primarily feed on nectar of flowering desert plants. Agaves are common within this bird’s arid lands range; and they are particularly fond of agave flowers.

The larger agave species produce far more nectar than hummingbird-adapted flowers do. These birds take advantage of any surplus – and are, what is known as “nonpollinating nectar thieves” as they are too small to pick up pollen from the flower; therefore, they retrieve nectar without providing pollination services to the plant.

Lucifers will also feed on the flowers of the penstemon, and a shrub known as anisacanth, as well as paintbrushes, willow, trumpet flower and cholla. They derive little nectar from ocotillos because of competition with carpenter bees, which pierce the flowers and steal the nectar from the bases.

However, some native and cultivated plants on whose flowers hummingbirds feed heavily rely on them for pollination. The mostly tubular-shaped flowers actually exclude most bees and butterflies from feeding on them and, subsequently, from pollinating the plants.

Most of the breeding activities occur from April to August.

Unlike other male hummingbirds, which typically perform their courtship displays away from nesting sites, the Lucifer males perform their mating display at the nests of females, often while they are busy constructing the nest or are even close to egg-laying.

The display consists of the male approaching the female, flying back and forth in 6-foot-wide horizontal movements between the female, followed by a vertical flight as high as 100 feet into the air and sudden spiraling dive towards the female. During this dive towards her, the wings or tail make a rapid flicking sound — as he flies away from her, he spreads his tail and makes a “wack-wack-wack” sound with his tail. This is followed by an erratic lateral flight. The display lasts about 30 to 40 seconds and may be performed for up to 5 times in an hour.

The female is responsible for building the cup-shaped nest out of plant fibers woven together and green moss on the outside for camouflage in a protected location – typically on the horizontal branch of a cholla, amid ocotillo leaves, or on dead fruiting stalks of lechuguilla plants found on steep, dry, rocky slopes.

The cup nest is usually about 1.8 inches (5 cm) across and 2.2 inches (5.6 cm) tall. The walls are made of plant fibers, including oak catkins, flower down, dried grass and twigs, lined with soft plant fibers, animal hair and feather down. The structure is strengthened with spider webbing and other sticky material, giving it an elastic quality to allow it to stretch to double its size as the chicks grow and need more room.The outside of the nest is decorated with lichens and small leaves.

These nests are often placed 2-10 feet (0.6 – 1.5 meters) above the ground. Sometimes they build on top of a nest from the previous year.

The female alone protects and feeds the chicks with regurgitated food (mostly insects since nectar is an insufficient source of protein for the growing chicks). As is the case with other hummingbird species, the chicks are brooded only the first week or two, and left alone even on cooler nights after about 12 days – probably due to the small nest size. The chicks leave the nest when they are about 22 – 24 days old.