There are two subspecies of the Luzon Tarictic Hornbill: The relatively widespread nominate, and subniger from the islands of Polillo and Patnanongan. It was hunted for meat, but now is considered to be safe as a new hunting ban has been enforced.

This species is kept in captivity. Jurong Bird Park keeps the species in their hornbill complex. There are two pairs in two different aviaries and Jurong has bred the species at one point. There is Safari World in Thailand with this species too. There are several zoos in the Philippines which keep the species and some have breeding success. San Diego Wild Animal Park used to keep and breed the species. Now however the only individual of this species outside Asia are kept at zoos in Berlin and Frankfurt. Berlin keeps the nominate subspecies and Frankfurt have a pair of the subniger.

There has been some problems with all the tarictic hornbills in captivity because all species used to be considered conspecific. For example, the birds at Frankfurt are listed as subniger and yet do not have the correct bill colouration. 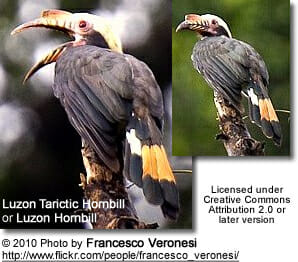