This nightjar is commonly heard within its range, but less often seen – due to its nocturnal habits. Its brown-mottled plumage keeps it well camouflaged during the day, when it is also usually hidden away sleeping.

These nightjars have a cryptic appearance that blends perfectly into their habitat. They are very difficult to spot during the daytime, when they are usually hidden away sleeping. They are most easily detected at night when light from car headlights are reflected red from their eyes, as they are sitting on tracks or roads. However, their presence is most often made known by their loud calls given at dusk.

The Lyre-tailed Nightjar is native to South America – where it mostly occurs in eastern parts – from Venezuela south through Colombia, Ecuador, Peru, Bolivia and Argenina. 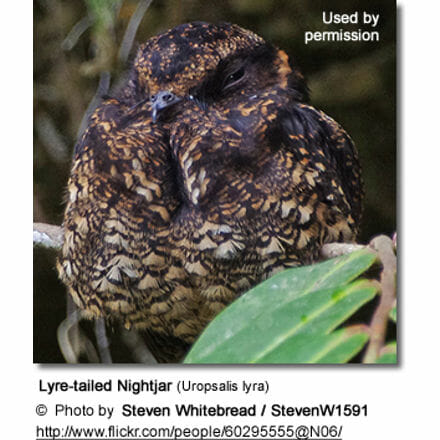 The plumage is mostly brown-black mottled.

The male Lyre-tailed Nightjars has elongated outermost tail feathers that are said to measure 24 inches (60 cm) or more, accounting for 80 to 90 percent its total length.

The female’s tail is short.

The male establishes his territory and sings at night to keep rivals away and at the same time to attract a female. The male Lyre-tailed NIghtjar’s courtship dance has been described as hovering while moving its long streamers in a scissor-like manner.

During the day, the incubation of the eggs is undertaken by the female, while both parents share the incubation at night. The incubation period is about 19 to 21 days. The hatchlings are covered in feather down. They are able to make short-distance movements within 24 hours of hatching.

The male stands guard the nest and defends the young. He will hover in place near the nest with his body in a nearly vertical position. The adults communicate with their young via soft clucking sounds to which the chicks respond.

Both parents feed the chicks regurgitated insects. They will continue to brood them until fledging. The chicks take their first flight when they are about 20 to 21 days old. 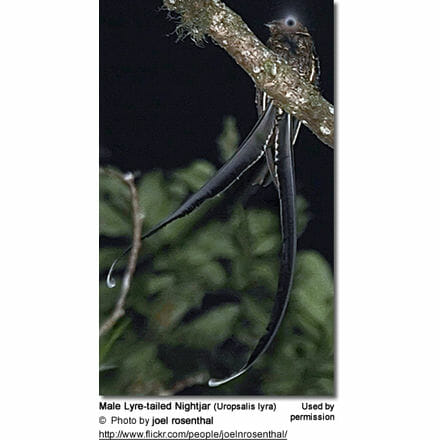