The Madagascar Fodies (Foudia madagascariensis) – also known as Red Fodies, Red Cardinal Fodies or Common Fodies – are abundant in their native habitat of Madagascar, and these small weavers have been introduced to many other islands. 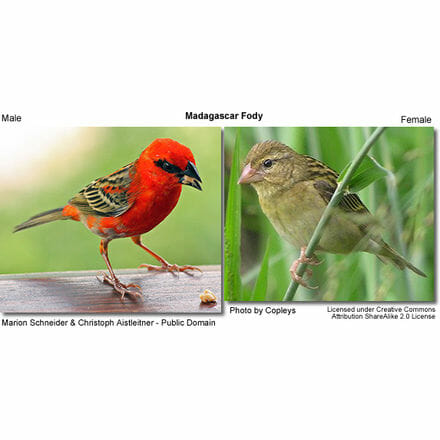 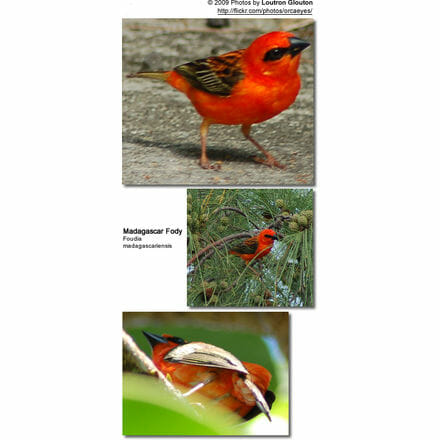 The Madagascar Fodies (Foudia madagascariensis) – also known as Red Fodies, Red Cardinal Fodies or Common Fodies – are abundant in their native habitat of Madagascar (an island off  the east coast of southern Africa), and these small weavers have been introduced to many other islands.

Non-breeding birds, juveniles and females basically look like plain sparrows. However, just before the breeding season, the male molts into a flashy scarlet-red plumage.

The Madagascar Fodies are native to the island of Madagascar. They have been introduced to some other islands in the Indian Ocean, including the Amirantes, Chagos, Seychelles, Rodrigues, Mauritius and Réunion; as well as on the island of Saint Helena – located in the South Atlantic Ocean.

They also occur on the Glorieuses and Comoro Islands, which they may have colonized without human assistance. Recently, breeding pairs have been discovered in Oman and Bahrain in the Arabian Peninsula.

Most authorities consider this a monotypic species. However, the form found on the island Reunion is sometimes considered a species. 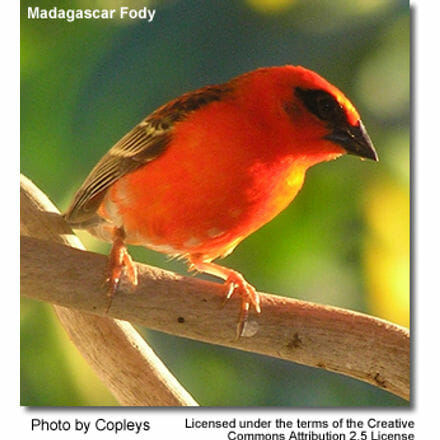 Breeding Male: Bright red plumage with black markings around each eye. Its wings and tail are olive-brown. Plumage variations exist with some males having a plumage that is more orangey or yellowish. In captivity a yellow form has occurred.

Non-breeding Males: Outside the monsoon (rainy) season, males molt into a plain, olive-brown plumage that resembles that of the females’.

The upper body is olive-brown; the plumage below is greyish-brown.

Madagascar fodies feed on grass and rice seeds, insects, nectar and arthropods (such as caterpillars, moths, spiders and beetles).

They often remove the nectar from a flower’s base.

The Madagascar Fodies form monogamous pair bonds. Most breeding activities are observed between October to March.

The male uses grass strips to weave a domed nest with a side entrance that is sometimes extended into a short tunnel. These nests are typically attached to coconut palms, trees, branches of shrubs, reeds or tall grasses.

The average clutch consists of 2 – 4 pale-blue/green, slightly gloss eggs that are incubated by the female alone. Both the male and the female feed and protect the young.

Their maximum recorded lifespan is 10+ years. They gain reproductive maturity at the age of one year.