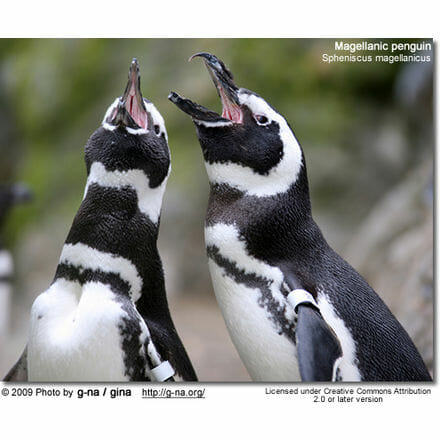 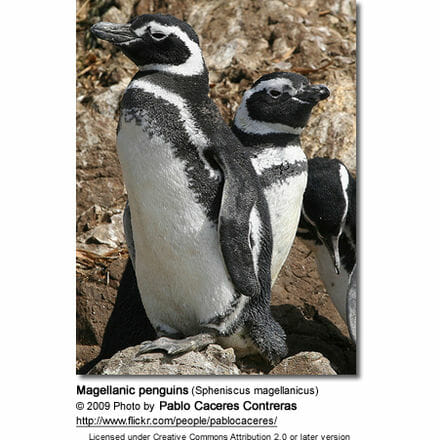 The Magellanic penguin (Spheniscus magellanicus) is a South American penguin, breeding in coastal Argentina, Chile and the Falkland Islands, with some migrating to Brazil. It is the most numerous of the Spheniscus penguins. Its nearest relatives are the African Penguin, the Humboldt Penguin and the Galápagos Penguin.

Magellanic Penguins are medium-sized penguins which grow to be 61-76 cm (24-30 in) tall and weigh between 2.7 kg and 6.5 kg (5.9-14.3 lbs), with the males being larger than the females and weight dropping while each parent nurtures its young.

Adults have black backs and white stomachs. There are two black bands between the head and the breast, with the lower band being in an inverted horseshoe shape. The head is black and has a broad white border running from behind the eye, around the black ear-coverts and chin, and joining on the throat. Chicks and juveniles are grey-blue on their backs, with a more faded grey-blue color on their chest. In the wild, Magellanic Penguins can live up to 25 years, while ages of 30 years have been reached in captivity. 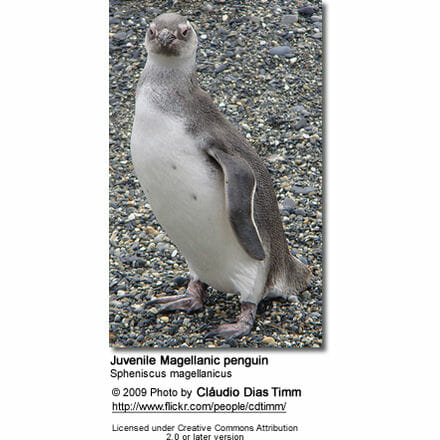 Young birds usually have a blotched pattern on their feet, with this ‘blotching’ fading as they age. Older birds of over ten years usually have solid black feet.

Like the other species of penguins, the Magellanic Penguin has very rigid wings used to ‘fly’ under water.

Magellanic Penguins feed in the water, preying on cuttlefish, sardines, squid, krill, and other crustaceans. Since they ingest sea water with their prey, a salt-excreting gland has evolved to filter out the salt.

Magellanic Penguins travel in large flocks when hunting for food. In the breeding season, these birds gather in large nesting colonies at the coasts of Argentina, southern Chile, and the Falkland Islands, which have a density of 20 nests per 100 square meters. One of the largest of these colonies is located at Punta Tombo.

Nests are built under bushes or in burrows. Two eggs are laid. Incubation lasts 39–42 days, a task which the parents share in 10-15 day shifts. The chicks are cared for by both parents for 29 days and are fed every 2–3 days. Normally both are raised through adulthood, though occasionally only one chick is raised.

Magellanic Penguins mate with the same partner year after year. The male reclaims his burrow from the previous year and waits to reconnect with his female partner. The females are able to recognize their mates through their call alone. 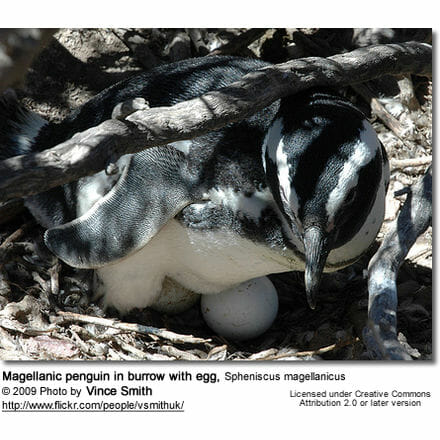 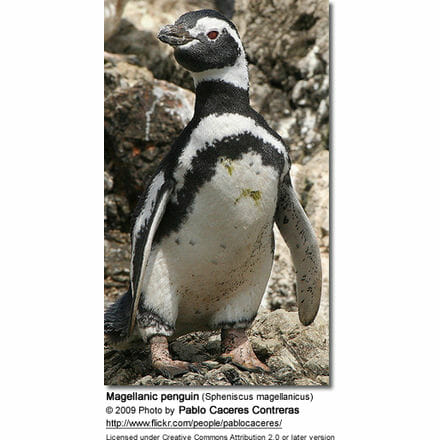 Status in the wild

Millions of these penguins still live on the coasts of Chile and Argentina, but the species is classified as “Near Threatened,” primarily due to the vulnerability of large breeding colonies to oil spills, which kill 20,000 adults and 22,000 juveniles every year off the coast of Argentina. The decline of fish populations is also responsible, as well as predators such as sea lions and giant petrels, which prey on the chicks

Climate change is forcing the birds to swim farther to find food, according researchers from the University of Washington.(Feb 16 2009)

Climate change has displaced fish populations, so Magellanic penguins must swim an extra 25 miles (40 km) further from the nest for fish. While the penguins are swimming an extra 50 miles (80.4 km), their mates are sitting on a nest and starving. A colony being tracked by University of Washington professor P. Dee Boersma, about 1,000 miles (1,609 km) south of Buenos Aires has fallen by more than 20 percent in the past 22 years, leaving just 200,000 breeding pairs. Some younger penguins are now moving their breeding colonies north to be closer to fish, but, in some cases, this is putting them on private, unprotected lands.

12 out of 17 penguin species are experiencing rapid population declines. 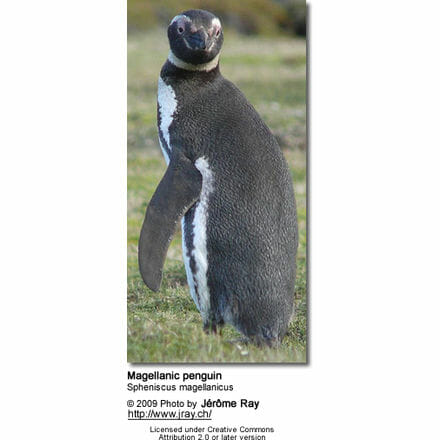 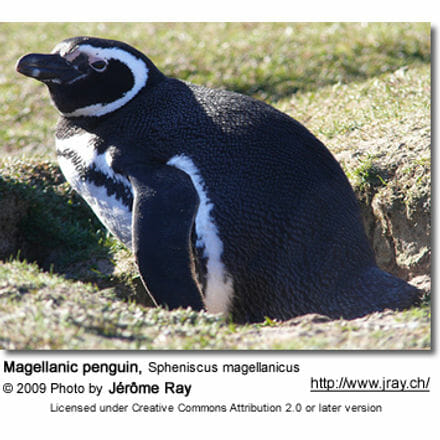 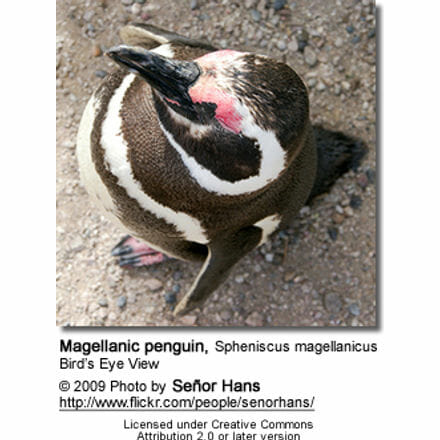 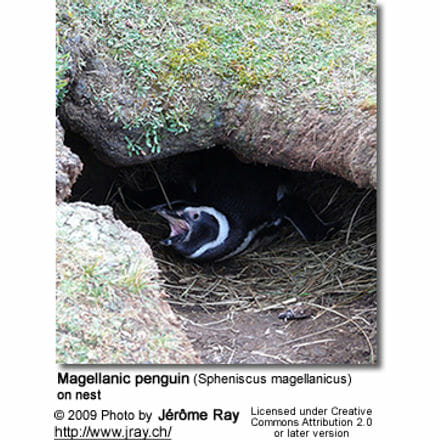 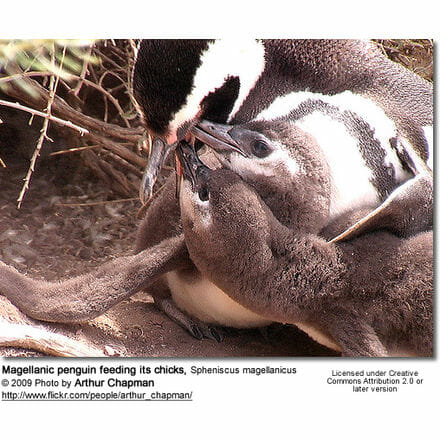 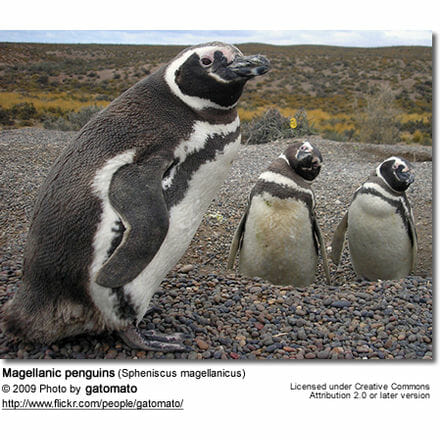