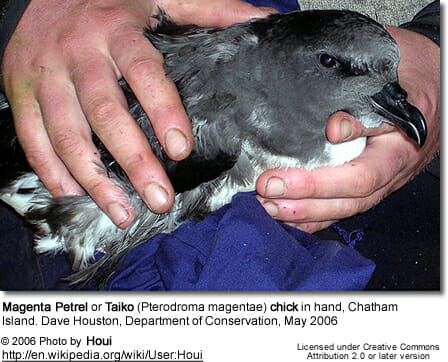 The Magenta Petrel or Chatham Island Taiko (Pterodroma magentae) is a small seabird in the gadfly petrel genus, Pterodroma.

The first specimen of the Magenta Petrel was collected from His Italian Majesty’s ship Magenta on July 22, 1867 in the South Pacific ocean, midway between New Zealand and South America. The link between it and the presumed-extinct Chatham Island Taiko was only confirmed when the first Taiko was caught on Chatham Island, New Zealand by David Crockett on January 1, 1978. Formerly widespread on Chatham Island, the Taiko is now confined to the forested Tuku valley system on the south-west of the island.

This medium-sized petrel has a brownish-grey back and wings, the undersides of the wings are brown and the belly is white. It has a black bill and pink legs.

This species is classified as critically endangered due to an assumed 80% decline in population in the last 60 years and the fact that it is restricted to one small location. The current population is estimated at between 100 and 150 individuals. In the 2005 breeding season, the 13 known breeding pairs successfully fledged 11 chicks. It is often referred to as the world’s rarest seabird.

The main threats to the species are introduced mammalian predators, principally cats and rats.

A conservation strategy is in place on the island to translocate chicks to an area where the main threats have been removed called the Sweetwater Secure Breeding Site. Studies in other petrel species such as Manx Shearwater, Wandering Albatross, and Cory’s Shearwater, have shown that birds return to the site in which they fledged. In 2007, eight chicks were successfully translocated and fledged from the breeding site .