The Magnificent Frigatebird (Fregata magnificens) was sometimes previously known as Man O’War, reflecting its rakish lines, speed, and aerial piracy of other birds.

They spend days and nights on the wing, with an average ground speed of 10 km/hour, covering 223±208 km before landing.

They alternately climb in thermals, to altitudes occasionally as high as 2500 m, and descend to near the sea surface (Chastel et al. 2003).

The only other bird known to spend days and nights on the wing is the Common Swift.

It is widespread in the tropical Atlantic, breeding colonially in trees in Florida, the Caribbean and Cape Verde Islands. It also breeds along the Pacific coast of the Americas from Mexico to Ecuador including the Galapagos Islands, and as far south as Brazil.

It has occurred as a vagrant on the Isle of Man in 1998 and in Denmark and Spain. A male was found exhausted at Whitchurch, Shropshire, many miles from the sea, in November 2005. This individual was taken to Chester Zoo but died a few days later. 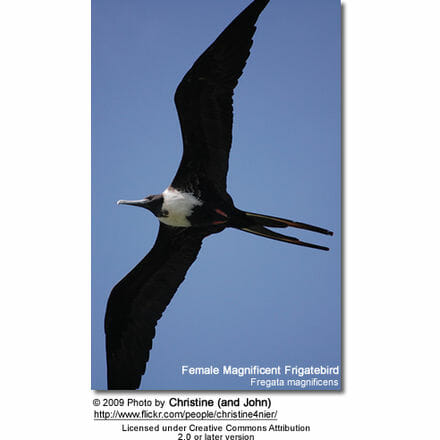 The Magnificent Frigatebird is 100 cm (39 inches) long with a 215 cm (85 inch) wingspan. Males are all black with a scarlet throat pouch which is inflated like a balloon in the breeding season. Although the feathers are black, the scapular feathers are iridescent and produce a purple colour when they refract sunlight.

Females are black, but have a white breast and lower neck sides, a brown band on the wings and a blue eye ring.

Immature birds have a white head and underparts.

This species is very similar to the other Frigatebirds and is similarly sized to all but the Lesser Frigatebird. However, it lacks a white axillary spur, and juveniles show a distinctive diamond-shaped belly patch. 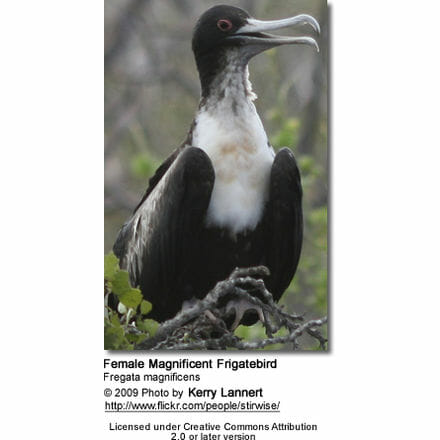 The Magnificent Frigatebird is silent in flight, but makes various rattling sounds at its nest. 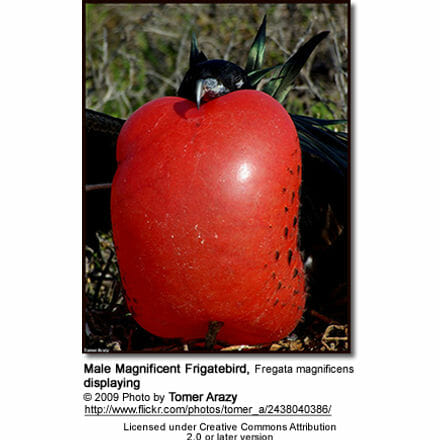 This species feeds mainly on fish, and also attacks other seabirds to force them to disgorge their meal. Frigatebirds never land on water, and always take their food items in flight.