The Magpie-lark (Grallina cyanoleuca) is a conspicuous Australian bird of small to medium size, also known as the Mudlark in Victoria and Western Australia, the Murray Magpie in South Australia, and as the Peewee in New South Wales and Queensland. It is currently thought to be related to fantails in the family Dicruridae.

It is a common and very widespread bird both in urban and rural areas, occupying the entire continent except for Tasmania and some of the inland desert in the far north-west of Western Australia, and appears to have adapted well to the presence of humans. 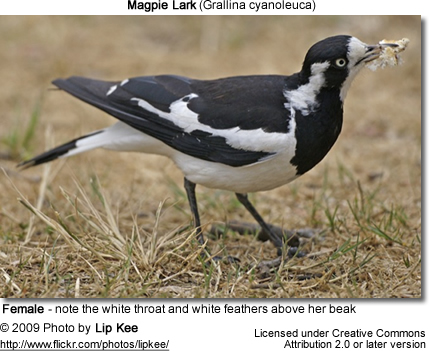 Around 26 to 30 cm long when full-grown, or about the same size as a European Common Blackbird, and boldy pied in black and white, they are a familiar sight around the country: sitting on telephone wires either singly or in pairs, or patrolling any patch of bare ground, especially foreshores or swamps, on their well-developed legs.

Males and females look alike from a distance but easy to tell apart: the female has a white throat, the male a black throat and a black eyestripe.

Juveniles and immatures of either sex have the white throat of the female and the black eyestripe of the male.

Like so many Australian birds, it was named for its apparent similarity to the Northern Hemisphere birds familiar to European settlers: in fact it is neither a magpie nor a lark and is not particularly closely related to either—though its actual relationship to other birds remains uncertain: it was traditionally placed somewhere in-between the mud nest builders and the currawong family (both of which look rather similar), but in the light of modern DNA studies is now rather tentatively grouped with the monarch flycatchers, fantails and drongos in the family Dicruridae.

A primarily carnivorous species that eats all sorts of small creatures, the Magpie-lark can adapt to an enormous range of different habitats, requiring only some soft, bare ground for foraging, a supply of mud for making a nest, and a tree to make it in. They have benefited greatly from agriculture: both the clearing of dense forest in fertile zones and the provision of artesian water in arid areas—although a disaster for other species—have been a boon for bare-ground and short grass feeders like Magpies and Magpie-larks.

Birds generally pair for life (though divorce is not unknown) and defend a territory together.

The nest is round, about 150 mm in diameter, usually placed on a flat branch somewhere near water, made of grass and plant material thickly plastered together with mud, and generously lined with grass, feathers and fur.

Breeding is opportunistic, usually from August to February in the fertile south, anytime after rain in drier areas, and multiple broods are common when conditions allow.

Both parents incubate a clutch of between three and five eggs.

More photos and information about this particular bird family in australia showing the chicks at different stages of development. 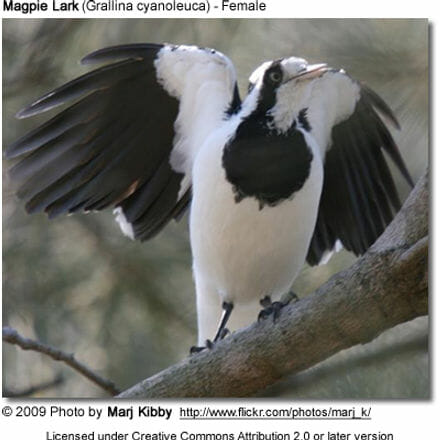 Magpie-larks are one of the 200-odd species of bird around the world that are known to sing in duet; each partner producing about one note a second, but a half-second apart, so that humans find it difficult to tell that there are actually two birds singing, not one.

Traditionally, it has been thought that the function of duet singing (not just in Magpie-larks but birds more generally and indeed in mammals, insects and frogs) was to defend a territory or to maintain the pair-bond.

More recently it has been proposed that it serves to guard against infidelity—that the male sings to attract a mate, and the female joins in to let her rivals know that this particular male is already taken.

Duet singing remains fairly poorly understood as a great deal of the existing research on birdsong has been carried out in the Northern Hemisphere, where a fairly small number of female birds sing.

In the case of the Magpie-lark, the duet singing is now known to be cooperative: pairs sing together to defend their territory. Magpie-larks sing more vigorously in response to duet calls from other birds than they do to the call of a single rival, and more vigorously still if the callers are strangers rather than established and familiar birds from a neighboring territory.

A pair of neighbors calling from the ‘wrong’ place, however, (as when calls are recorded and played back by an experimenter) bring forth a powerful reaction: clearly, they know exactly who their neighbors are.