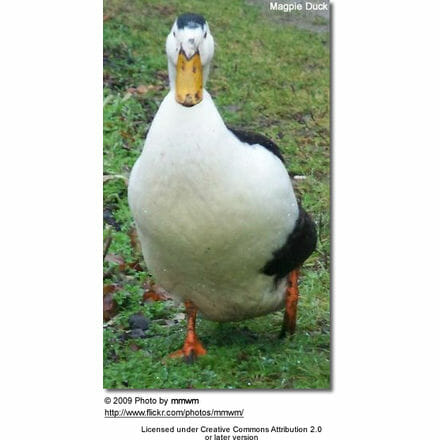 The Magpie Duck is a lightweight breed of domesticated duck. Developed in the early 20th century, they are raised as general purpose ducks, since they have attractive markings, are highly productive layers of large eggs and are great with children.

Named for its distinctive black and white plumage, reminiscent of the colouration of the European Magpie, the typical example of the species is predominantly white with two large black areas on the back and top of the head.

As the bird ages the black cap will normally begin to be flecked with white and may eventually become completely white. Similar in shape to the Khaki Campbell, but more substantial, the Magpie is moderately streamlined with a somewhat upright carriage that suggests Indian Runner Duck in its ancestral bloodline. The bill is yellow or orange, but turns green in older birds. The legs and feet are orange but may be mottled. The chest is rounded and the neck moderately long.

They lay between 220–290 large green/blue eggs annually. They are a hardy variety, active foragers, and live for approximately 9 years. 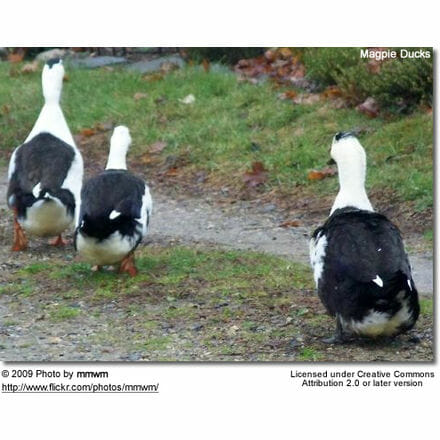 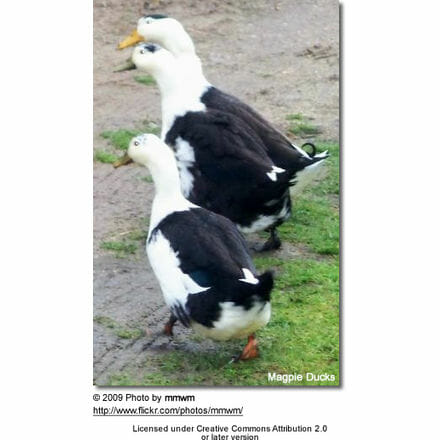 The Magpie Duck is believed to have originated in the early 1900s, having been developed by Oliver Drake and M.C. Gower-Williams in Wales.

It is possible that they were selectively bred from the Belgian Huttegem, an old breed that was popular in the duck-raising area north of Brussels in the 19th century.

Descriptions of the Huttegem are remarkably similar to the modern Magpie Duck, and old pictures show many of the features of the Magpie including the colouring.

The Magpie Duck was imported to the United States from Great Britain in 1963, but was not widely kept. It was admitted to the American Standard of Perfection in 1977, but it did not become popular in the US until 1984. It is still one of the rarer varieties of domesticated duck.

Although the newly-hatched ducklings clearly show their markings, it is difficult for breeders to achieve the breed standards as the numbers of perfectly marked ducklings are low, especially with regard to the bill and leg colouring.

The American Standard was relaxed in 1998 to take this difficulty into account.

Although the Black and White variety is the most common, there are also varieties of Blue and White, Dun and White, and a rare Chocolate and White colouring.