The Malabar Pied Hornbill (Anthracoceros coronatus) is a hornbill. Hornbills are a family of tropical near-passerine birds found in the Old World (Africa, Asia and Europe).

The Malabar Pied Hornbill is a common resident breeder in tropical southern Asia from India and Sri Lanka east to Borneo. Its habitat is open woodland and cultivation, often close to habitation.

In central India, tribals believed that hanging a skull of the hornbill (known as dhanchidiya) brought wealth.

The Malabar Pied Hornbill is a large hornbill, at 65cm in length. It has mainly black plumage apart from its white belly, throat patch, tail sides and trailing edge to the wings. The bill is yellow with a large, mainly black casque (a large display growth on the upper mandible of the bill). Males and females look alike, but immatures have a smaller casque. 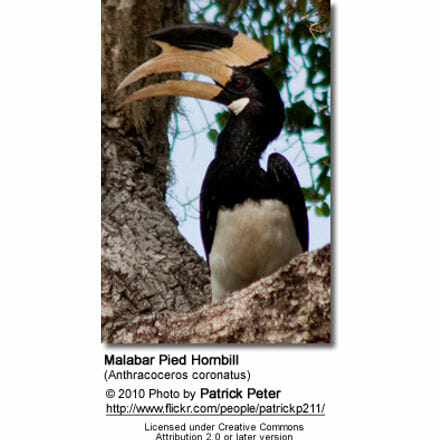 During incubation, the female lays two or three white eggs in a tree hole, which is blocked off with a cement made of mud, droppings and fruit pulp. There is only one narrow aperture, just big enough for the male to transfer food to the mother and the chicks.

When the chicks and the female are too big to fit in the nest, the mother breaks out and rebuilds the wall, then both parents feed the chicks.

This species is omnivorous, taking fruit, fish and small mammals.

Figs form an important part of their diet and contribute to 60% of their diet from May to February, the non-breeding season and during breeding (March to April) up to 75% of the fruits delivered at the nest were figs.

They also feed on other fruits including those of the Strychnos nux-vomica that are known to be toxic to many vertebrates. 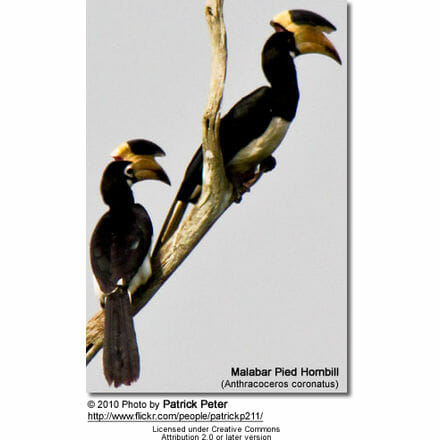