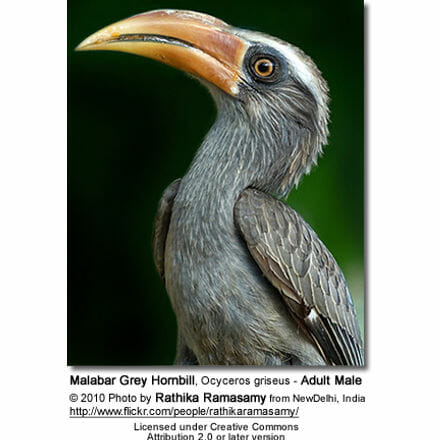 The Malabar Grey Hornbill, Ocyceros griseus, is a hornbill that is endemic to the Western Ghats and associated hills of southern India. They have a large beak but lack the casque that is prominent in other species of hornbills. They are found mainly in dense forest and around rubber, arecanut or coffee plantations. They move around in small groups, feeding on figs and other forest fruits. Their loud cackling and laughing call makes them familiar to people living in the region.

The Malabar Grey Hornbill is a large bird, at 45cm in length with a 23 cm tail and pale or yellowish to orange bill.

Males have a reddish bill with a yellow tip while the females have a plain yellow bill with black at the base of the lower mandible and a black stripe along the culmen (= external ridge along the outer part of the center of the upper beak). They show a broad whitish superciliary band above the eye running down to the neck. They fly with a strong flap and glide flight and hop around heavily on the outer branches of large fruiting trees. They have brown-grey wings, a white carpal patch and black primary flight feathers tipped with white.

The Indian Grey Hornbill which is found mainly on the adjoining plains is easily told apart by its prominent casque and in flight by the white trailing edge to the entire wing. The Malabar Grey Hornbill has a grey back, and a cinnamon vent. The long tail is blackish with a white tip, and the underparts are grey with white streaks. The long curved bill has no casque. Immature birds have browner upperparts and a yellow bill. Young birds have a dull white or yellow iris. 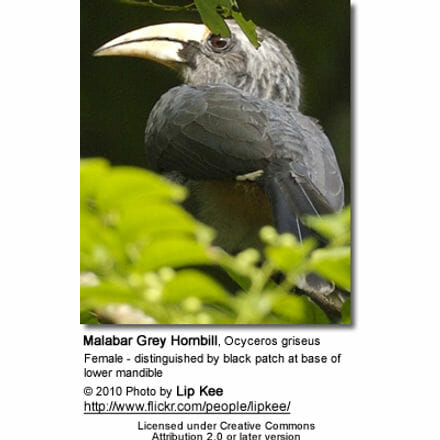 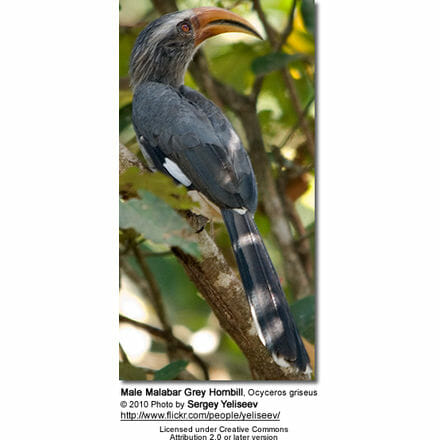 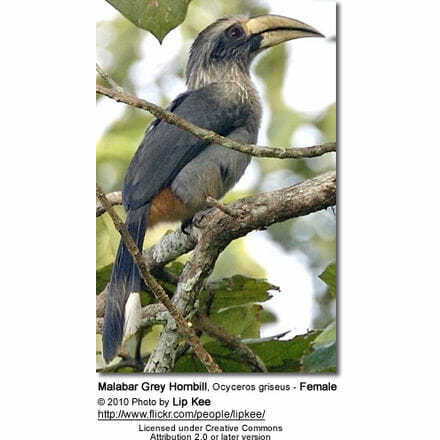 The Malabar Grey Hornbill is a common resident breeder in the Western Ghats and associated hills of southern India.

They are mainly found in dense forest habitats and the thinner dry forest habitat of the plains is typically occupied by the Indian Grey Hornbill.

In the past the Sri Lanka Grey Hornbill was included with this species but is now considered distinct. 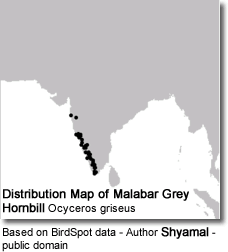 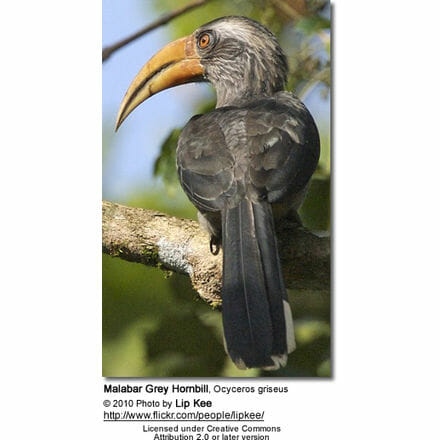 This hornbill is found in small groups mainly in habitats with good tree cover.

Being large frugivores, they are important as seed dispersal agents for many species of fruit bearing forest trees.

They also feed on small vertebrates and in captivity they will readily take meat.

Their loud calls are distinctive and include “hysterical cackling”, “laughing” and “screeching” calls.

The breeding season is January to May. Being secondary cavity nesters (incapable of excavating their own nests), the find trees with large cavities.

A study in the Anaimalai Hills showed that the species preferred nest sites that had large trees. The nest holes were usually found in large trees with hollows caused by heart-rot where a branch had broken off. Trees of the species Lagerstroemia microcarpa, Terminalia bellirica and Terminalia crenulata were found to hold nearly 70% of all the nests in the Mudumalai area.

The species is monogamous and the same nest sites are used by the pair year after year.

The female incarcerates herself within the cavity by sealing its entrance with a cement made from her droppings. The female then lays three or sometimes four white eggs and begins a complete moult of her flight feathers.

The entrance to the nest retains a narrow aperture through which the female voids excreta and receives food from the male. The male bring all the food needed for the female and the young.

Berries, insects, small rodents and reptiles are included in the diet. Males tap the tree to beckon the female on arriving with food. 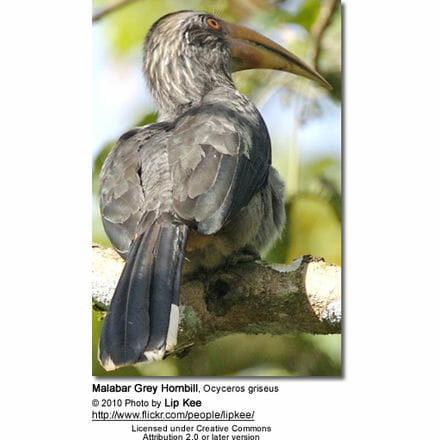