In North America, it is also known as Wild Duck. It is a widespread dabbling duck found in wetland areas, including parks, small ponds and rivers.

The Mallard is the ancestor of all domestic duck breeds, except the Muscovy Duck.

The Mallards are probably the best-known of all ducks and are believed to be the most common duck species on Earth; and they are not considered threatened. However, one major threat to this duck species includes hybridization with other ducks it is closely related to. Mallards frequently interbreed with the American Black Duck, Northern Pintail and domesticated species, leading to various hybrids; and these hybrids are actually fertile (able to produce young).

They are exceptionally fast flyers for their size, reaching speeds of 65 km/h (40 mph).

They breed throughout the temperate and sub-tropical areas of North America, Europe and Asia; but also frequent Central America and the Caribbean.

The Mallard is strongly migratory in the northern parts of its breeding range. They breed from Alaska and Quebec south to southern California, Virginia, Texas, and northern Mexico; and migrate south to winter throughout the United States and south to Central America and the West Indies.

They have also been introduced into Australia and New Zealand. It is now the most common duck in New Zealand.

It is highly gregarious outside of the breeding season and will form large flocks.

Both male and female mallards are unable to fly after molting until they re-grow their flight feathers in time for the fall migration.

Their preferred habitats include lowland habitat, such as marshes, ponds, small lakes, sheltered coastal bays and estuaries, shallow pools, tidal flats, and protected coves – but they also inhabit mountain lakes and streams. Mallards also graze in stubble fields. They mostly nest in nest in grasslands away from the water’s edge but have been known to use old bird nests, tree cavities, rights-of-way, and meadows with woody vegetation

The size of the Mallard varies clinally, and birds from Greenland, although larger than birds further south, have smaller bills and are stockier. It is sometimes separated as subspecies Greenland Mallard (A. p. conboschas).

The breeding male is unmistakable, with a green head, black rear end and a blue speculum (= distinctive wing patch) edged with white, obvious in flight or at rest. Males also possess a yellow bill with a black tip, whereas females have a dark brown bill.

When the male molts, he loses his distinctive green head feathers, but he still has the white collar ring and rusty-brown chest. This is commonly referred to as the “eclipse plumage.”

The female Mallard is light brown, with plumage much like most female dabbling ducks. It can be distinguished from other ducks, by the distinctive speculum (= a well-defined patch of colored, often iridescent feathers on the wings). In non-breeding (eclipse) plumage, the drake looks more like the female.

Mutations and Hybrids (Photos and Information)

The Mallard’s average life span in the wild:5 to 10 years. The oldest recorded Mallard lived for 29 years in captivity.

Subspecies of the mallard and their ranges:

This is a noisy species.

The male has a nasal call, which is quieter than the female’s very familiar loud “quack” that is typically associated with ducks.

Groups of male mallards (drakes) chase and display to females all winter long, but even more so in February and March (shortly before the breeding season). Once a male has attracted a female, he remains at her side to prevent her from mating with other males.

The mated pairs then migrate together and breed in the northern parts of their range. They are very territorial during that time.

Mallards also have rates of male-male sexual activity that are unusually high for birds. In some cases, as many as 19% of pairs in a Mallard population are male-male homosexual.

When mallards pair off with mating partners, often one or several drakes will end up “left out”. This group will sometimes target an isolated female duck — chasing, pestering and pecking at her until she weakens (a phenomenon referred to by researchers as rape flight), at which point each male will take turns copulating with the female. Male Mallards will also occasionally chase other males in the same way. In one documented case, a male Mallard copulated with another male he was chasing after it had been killed when it flew into a glass window. 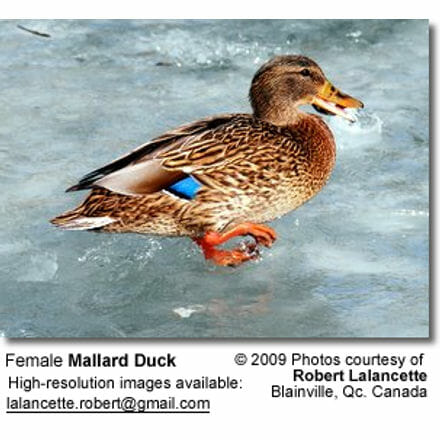 Mallards usually nest on a river bank, but not always particularly near water. Those living in urban areas may build their nests in very unusual places, including parking lots or rooftops, near swimming pools, in window wells, and even in flowerpots. They use locally available plant material or the hen’s breast feathers.

Hens lay six to 14 creamy to greenish-buff colored eggs. Incubation is done by the hen and lasts 23 to 29 days. Once incubation has commenced, males abandon the nest and join a flock of other males.

The hen leads her young to the water within 24 hours of hatching. The young are fully independent 50 to 60 days after hatching. However, mallards are very family-oriented and stay with their young.

The ducklings are precocial, and can swim and feed themselves on insects as soon as they hatch, although they stay near the female for protection. Also, young ducklings are not naturally waterproof and rely on the mother to provide waterproofing.

Mallard Ducks are omnivores. They usually feed by dabbling for plant food or grazing. They are often seen with their head under water and their tails sticking up in the air as they are looking for their next meal underwater, which may be plant food, invertebrates (i.e., insects), fish or amphibians.

They can filter tiny animals from the water by means of the lamellae (miniature ridges inside the bills of water-feeding birds or “teeth”) that line the inside of the bill.

They will also graze on land, feeding on grains and small plants. Their bills have a sharp “nail” on the tip which they use to pick up small prey.

Recently, these “dabbling ducks” have been observed DIVING under water for food – information and a video. 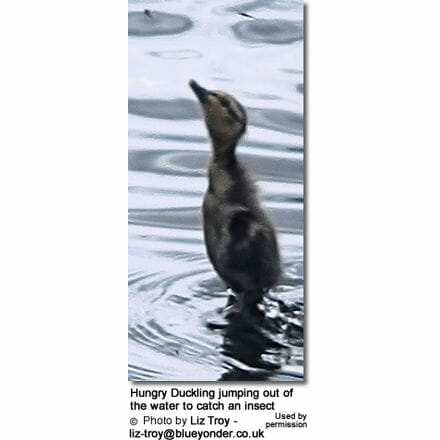 This is a noisy species. The male has a nasal call, whereas the female has the very familiar “quack” always associated with ducks.