Mandarin Ducks, which are referred to by the Chinese as Yuan-yang (simplified Chinese: 鸳鸯; traditional Chinese: 鴛鴦; pinyin: yuān yāng), are frequently featured in Oriental art and are regarded as a symbol of conjugal affection and fidelity.

The Mandarin Duck symbol is also used in Chinese weddings, because in traditional Chinese lore they symbolize wedded bliss and fidelity.

The adult male is a striking and unmistakable bird. It has a red bill, large white crescent above the eye and reddish face and “whiskers”. The breast is purple with two vertical white bars, and the flanks ruddy, with two orange “sails” at the back.

During molting periods when the Mandarin sheds its feathers, the males resemble females but can be distinguished by the red bill (please refer to the photos of the breeding male and to the right, the “Eclipse Male”).

The female is similar to female Wood Duck, with a white eye-ring and stripe running back from the eye, but is paler below, has a small white flank stripe, and a pale tip to its bill.

The juveniles resemble the females but the males have a pinkish bill.

The species was once widespread in eastern Asia, but it is now endangered because of large-scale exports and the destruction of its forest habitat. The populations in eastern Russia and in China are both probably well below 1,000 pairs, although Japan may have around 5,000 pairs.

Specimens frequently escape from collections, and in the 20th century a feral population numbering about 1,000 pairs was established in Great Britain. Although this is of great conservational significance, the birds are not protected in the UK since the species is not native there.

The Asian populations are migratory, overwintering in lowland eastern China and southern Japan.

Mandarins may form small flocks in winter, but rarely associate with other ducks.

In the wild, Mandarin Ducks breed in densely wooded areas near shallow lakes, marshes or ponds. They nest in cavities in trees close to water. The nest hole is lined with down with an average clutch size of 8-10 eggs. The eggs are 56mm X 42mm with color variations of glossy buff to ivory. The mother sheds her own feathers to cover her eggs so she can feed or rest. She is very protective of both her ducklings and her eggs. The mother will decoy predators away from the nest. The male plays no part in the incubation process, which lasts about thirty days. 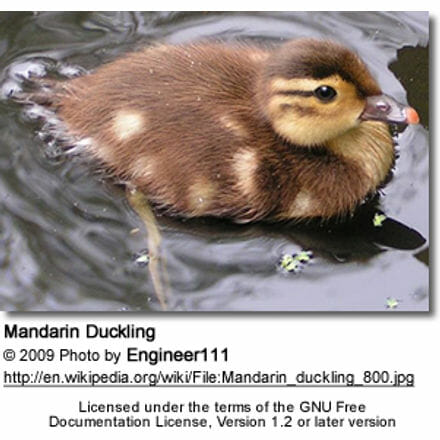 When the ducklings are feeding the mother stands guard a short distance away. If she senses danger she will lead the ducklings to shelter; diving underwater and swimming until they reach shelter in the long grass of the riverbank or lake.

If a predator is present, the mother will feign injury in an effort to distract the predator and lead it away from her brood. The ducklings are usually able to fly in time for fall migration.

Despite the protectiveness of their parents, half or more of the ducklings do not survive the first two weeks of life. 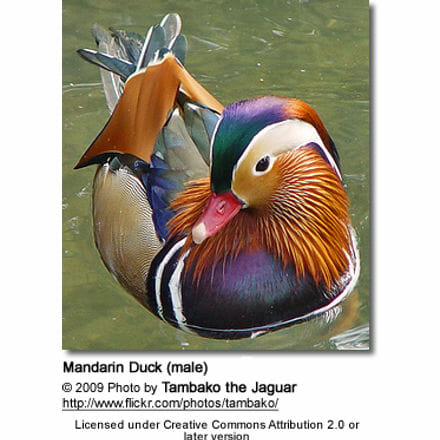 Mandarins feed by dabbling or walking on land. They mainly eat plants and seeds, especially beechmast. They feed mainly near dawn or dusk, perching in trees or on the ground during the day.

The Mandarin was known and revered in Asia well before the birth of Christ. Westerners were quick to discover them when they began to visit that area of the world — captive Mandarins were brought to Europe as early as the 1700’s.

The Mandarin is easy to care for and breed and is therefore commonly kept by private breeders, on game farms and in zoos. 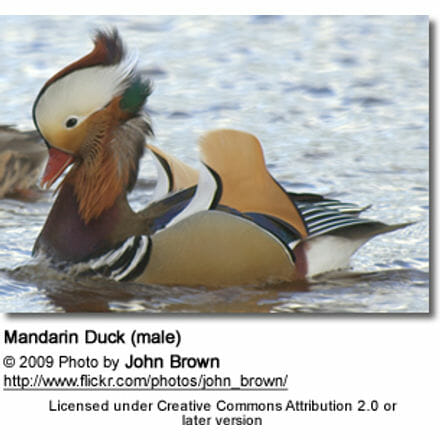 Mandarin ducks feed by dabbling or walking on land. The Mandarins diet consists of seeds, acorns, grain, aquatic plants, insects, land snails and fish. They usually feed near dawn or dusk, roosting up in trees or on the ground during the day.

The diet is seasonal, in the fall acorns and grains are favored while in the spring insects, snails, fish and vegetation are preferred. During the summer months dew worms, grasshoppers, small fish, frogs, mollusks and small snakes are preferred.

Please note that feeding ducks and geese makes them dependent on humans for food, which can result in starvation and possibly death when those feedings stop. If you decide to feed them, please limit the quantity to make sure that they maintain their natural ability to forage for food themselves, IF natural food sources are available.