The Maximilian’s Pionus (Pionus maximiliani) – also often referred to as Scaly-headed Parrot – is indigenous to Central-eastern South America. They nest in tree cavities and feed in the tree canopies. 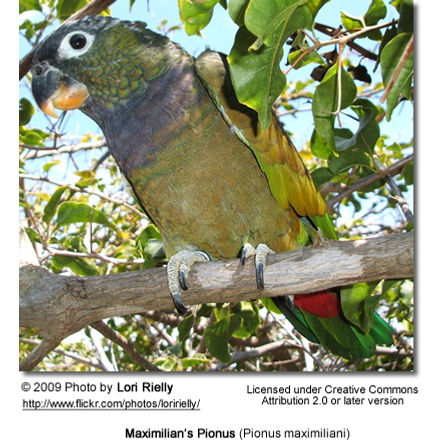 Due to habitat destruction and capturing for the pet trade, this species is now endangered in its natural habitat and listed as CITES II.

They inhabit open woodlands and dry tropical lowland forests, such as caatinga and cerrado forests, and can – in some areas – move up to approximately 6000 feet elevation.

They are often observed in pairs or in small groups of up to about 50 birds. They nest in tree cavities and feed in the tree canopies. 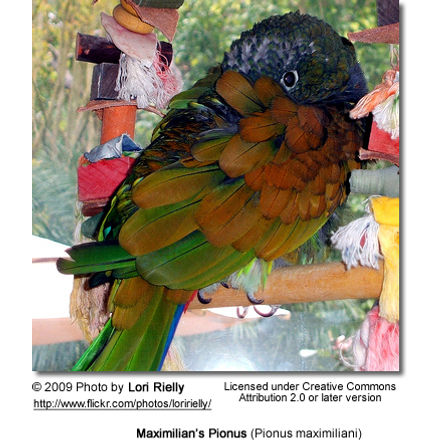 They are dark brownish-green parrots, with a more bronze color on the underparts, and short square tails. They have a blue throat patch and a typical bright red patch on the under tail coverts distinguishable to all pionus species. The central tail feathers are green with the outer feathers being blue. They have distinctive light-colored red eye-rings that are even present in young birds. The beak is a yellowish horn-colored grey getting darker close to the head. The eyes are dark brown circled by eye rings varying from white to gray. Their legs are grey.

There is no visible means of sexing these birds. Surgical sexing or DNA (blood or feather) sexing must be used to confirm gender. Although males are typically larger and have larger heads and beaks.

Juveniles generally have a duller plumage and less violet-blues on their throats and upper breast than the adults. 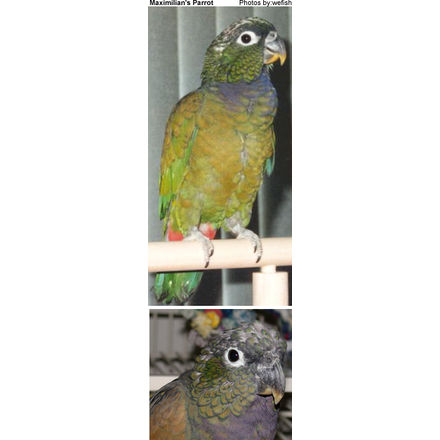 The Maximilian Pionus is the most popular and common among the Pionus species, as it is appreciated for its sweet and fun disposition, easy-going personality and intelligence. These qualities make this parrot a good choice for first-time parrot owners and a wonderful family pet. It is also an excellent choice for apartment dwellers, due to their calm personality and easy maintenance.

Owners describe them as inquisitive and sociable parrots that are easily tamed. To top it all of, they are said to be best talkers in the Pionus family. The Maximilians are devoted to their owners and thrive on attention – however, some of them, particularly males, may bond with one person and aggressively protect that person from perceived dangers, including other family members.

They are active by nature and may become overweight if closely confined. They are not loud like many conures and amazons, and are less apt to bite than other parrot species.

Caring for Your Maximilian’s Pionus:

The Maximilian’s Pionus is a very active parrot and needs the largest space that your home can accommodate — ideally, this parrot should be able to fly from perch to perch, especially so if the pionus is kept in the cage most of the day. This being said, however roomy the cage, every bird should be allowed to be out of the cage for a minimum of three hours each day. Many birds can spend a good deal of their time on a play pen or parrot perch. As they are not strong chewers, durable cage construction is not as critical as it would be for the largest species of parrots. They are technically inclined and learn to open locks pretty quickly and locks or escape-proof latches may be recommended.

When setting up your pionus, please visit this website: How to Keep Your Pet Parrot Happy and Healthy for ideas and recommendations. 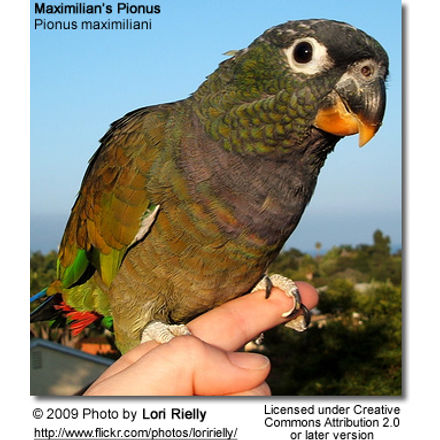 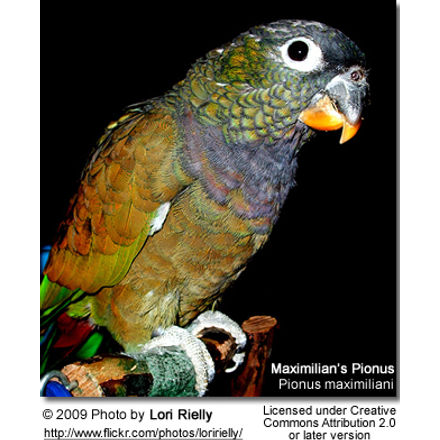 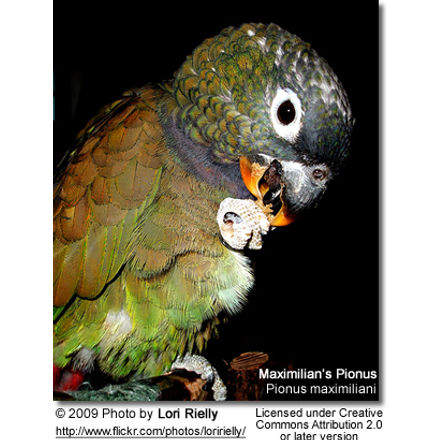 The Maximilian’s Pionus is moderately difficult to breed in captivity and, during the breeding season, they can get noisy. If you have near-by neighbors who are sensitive to noise this should be a consideration when deciding to breed this species.

The Maximilian is of breeding age when they are about 3 to 5 years old. In North America, the breeding season stretches from February or March to June or July.

As far as cage is concerned, the following dimensions would work well: 4 feet wide by 4 feet tall by 6 to 8 feet long. Suspended cages facilitate sanitation as droppings and discarded food fall through the wire cage floor. Grandfather-style nest boxes work best; the dimensions of (or close to) the following dimensions 10″ wide x 10″ deep x 18-24″ high. Place the nest box high up in a dark, secluded area of the flight.

The female generally produces 3 to 5 eggs, which she incubates for 24 to 26 days. The chicks usually fledge when they are 8 to 12 weeks old. Maximilian’s Pionus chicks are challenging to handraise and it is best to allow the parents to take care of the chicks for at least the first week. Various green foods and mealworms are appreciated by the parents for feeding the chicks. Corn cob is a favorite weaning food. 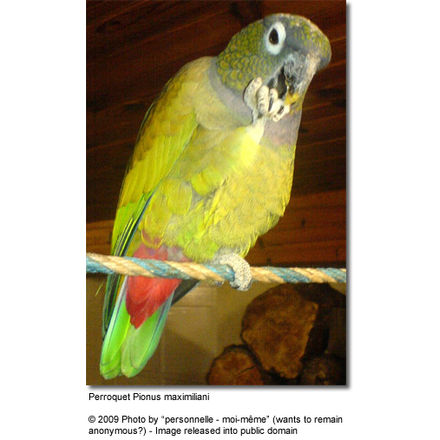 Description: Looks like the Maximilian’s Pionus (maximiliani), but the lower breast, abdomen, back and flight feathers have a strong bronze-colored tinge; the breast band with slight reddish-violet tinge, and at 12 inches (30 cm), this parrot is somewhat larger.

Description: Looks like the Siy Parrot described above, but has a fainter bronze-colored tinge; the breast band more blue and extensive, but generally retaining a reddish-violet tinge. It’s slightly larger at 12 inches (31 cm).