The megapodes, also known as incubator birds or mound-builders, are stocky, medium-large chicken-like birds with small heads and large feet in the family Megapodiidae. Their name literally means large foot (Greek: mega = large, poda = foot), and is a reference to the heavy legs and feet typical of these terrestrial birds.

All are browsers, all but the Malleefowl occupy wooded habitats, and most are brown or black colored.

Megapodes are superprecocial, hatching from their eggs in the most mature condition of any birds. They hatch with open eyes, with bodily coordination and strength, with full wing feathers and downy body feathers, able to run, pursue prey, and, in some species, fly on the same day they hatch.

Megapodes do not incubate their eggs with their body heat as other birds do, but bury them. Their eggs are unique in having a large yolk, making up 50-70% of the egg weight. They are best known for building massive nest-mounds of decaying vegetation, which the male attends, adding or removing litter to regulate the internal heat while the eggs hatch.

However, some bury their eggs in other ways: there are burrow-nesters which use geothermal heat, and others which simply rely on the heat of the sun warming sand. Some species vary their incubation strategy depending on the local environment.

Although the Australian Brush-turkey is the only species of bird in which sex ratio is confirmed to be incubation-temperature dependent, it is speculated that this is common to all Megapodes, as they share nesting methods unique among birds. The non-social nature of their incubation raises questions as to how the hatchlings come to recognise other members of their species, which is due to imprinting in other members of the order Galliformes.

Recent research suggests that there is an instinctive visual recognition of specific movement patterns made by the individual species of megapode.

Many are shy, solitary, and inconspicuous.

Megapode chicks do not have an egg tooth: they use their powerful claws to break out of the egg, and then tunnel their way up to the surface of the mound, lying on their backs and scratching at the sand and vegetable matter. Similar to other superprecocial birds, they hatch fully feathered and active, already able to fly and live independently from their parents. 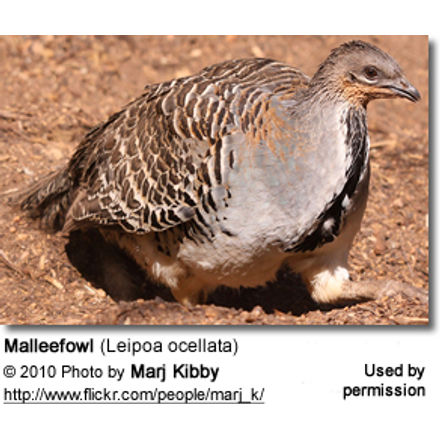 Megapodes are found in the broader Australasian region, including islands in the western Pacific, Australia, New Guinea, and the islands of Indonesia east of the Wallace Line, but also the Andaman and Nicobar Islands in the Bay of Bengal.

The distribution of the family has contracted in the Pacific with the arrival of humans, and a number of island groups such as Fiji, Tonga and New Caledonia have lost many or all of their species.

‎There are more than 20 species in 7 genera. Although the evolutionary relationships between the Megapodiidae are especially uncertain, the morphological groups are clear: