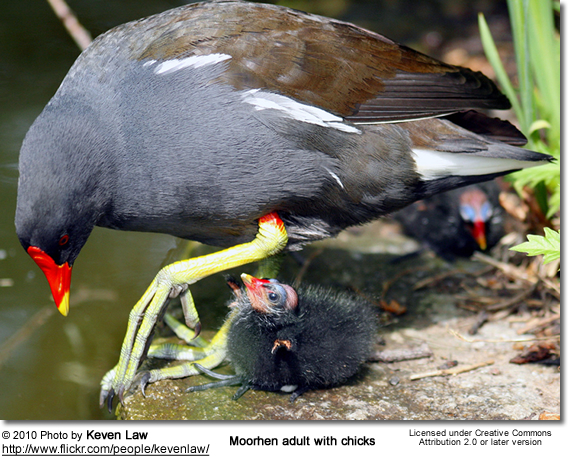 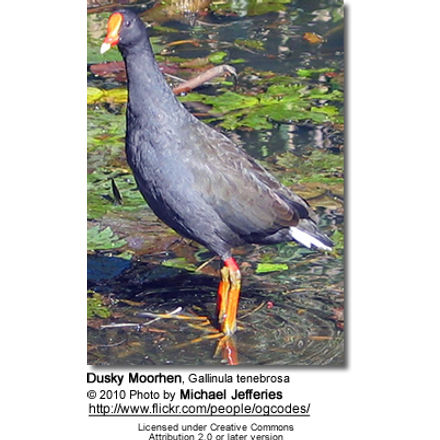 Moorhens, sometimes called marsh hens, are medium-sized water birds that are members of the rail family Rallidae. They constitute the genus Gallinula. They are close relatives of coots, and because of their apparently nervous behavior (frequently twitching tail, neck and grinding their backs) are sometimes called “skitty coots”. Often, they are referred to as (black) gallinules.

A few species from the Australian region, sometimes separated in Tribonyx, are called native-hens. Tribonyx is better considered a subgenus however as the differences are not very striking and mainly plesiomorphic. The native-hens differ visually by shorter, thicker and stubbier toes and bills, and longer tails that lack the white signal pattern of typical moorhens.

These rails are mostly brown and black with some white markings in plumage colour. Unlike many of the rails they are usually easy to see, feeding in open water margins rather than hidden in reedbeds.

They have short rounded wings and are weak fliers, although usually capable of covering long distances. The Common Moorhen in particular migrates up to 2,000 km from some of its breeding areas in the colder parts of Siberia. Those that migrate do so at night. The Gough Island Moorhen on the other hand is considered almost flightless—it can only flutter some meters. As common in rails, there has been a marked tedency to evolve flightlessness in island populations.

Moorhens can walk very well on strong legs, and have long toes that are well adapted to soft uneven surfaces.

These birds are omnivorous taking plant material, small rodents, amphibians and eggs. They are aggressively territorial during the breeding season, but are otherwise often found in sizeable flocks on the shallow vegetated lakes they prefer. 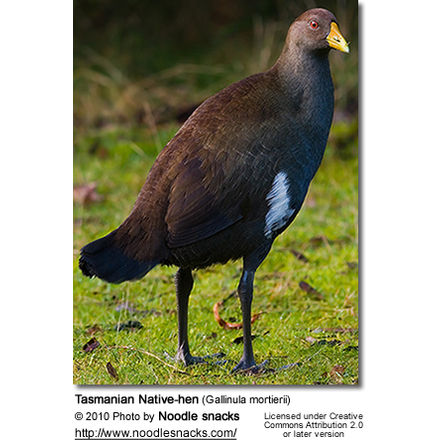 Living and recently extinct species of Gallinula are:

Other moorhens have been described from older remains. Apart from the 1-3 extinctions in more recent times, another 1-4 species have gone extinct as a consequence of early human settlement: Hodgen’s Waterhen (Gallinula hodgenorum) of New Zealand—which belongs in subgenus Tribonyx—and a species close to the Samoan Moorhen from Buka, Solomon Islands, which is almost certainly distinct from the Makira Moorhen as the latter cannot fly. The undescribed Viti Levu Gallinule of Fiji would either be separated in Pareudiastes if that genus is considered valid, or may be a completely new genus. Similarly, the undescribed Mangaia “swamphen,” currently tentatively assigned to Porphyrio, may belong to Gallinula/Pareudiastes. 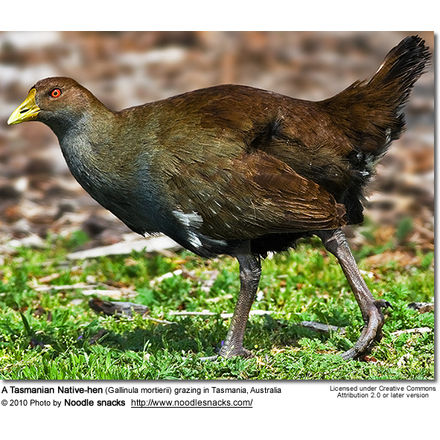 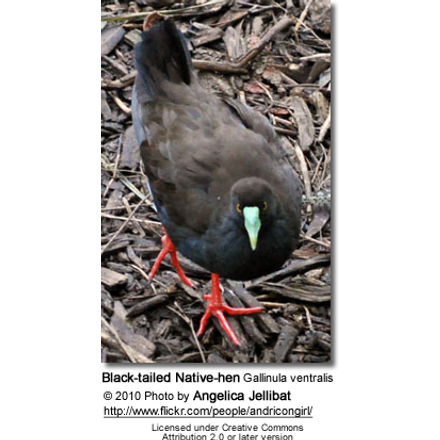 Still older fossils document the genus since the Late Oligocene onwards. The genus seems to have originated in the Southern Hemisphere, in the general region of Australia. By the Pliocene, it was probably distributed worldwide:

Even among non-Passeriformes, this genus has a long documented existence. Consequently some unassigned fragmentary rail fossils might also be from moor- or native-hens. For example, specimen QM F30696, a left distal tibiotarsus piece from the Oligo-Miocene boundary at Riversleigh, is similar to but than and differs in details from G. disneyi. It cannot be said if this bird—if a distinct species—was flightless. From size alone, it might have been an ancestor of G. mortierii (see also below).

In addition to paleosubspecies of Gallinula chloropus, the doubtfully distinct Late Pliocene to Pleistocene Gallinula mortierii reperta was described, referring to the population of the Tasmanian Native-hen that once inhabited mainland Australia and became extinct at the end of the last ice age. It may be that apart from climate change it was driven to extinction by the introduction of the dingo, which as opposed to the marsupial predators hunted during the day, but this would require a survival of mainland Gallinula mortierii to as late as about 1500 BC

G. disneyi was yet another flightless native-hen—indicative of that group’s rather basal position among moorhens -, and its time and place of occurrence suggest it as an ancestor of G. mortierii (reperta), from which it differed mostly in its much smaller size. However, some limb bone proportions are also strikingly different, and in any case such a scenario would require a flightless bird to change but little during some 20 million years in an environment rich in predators. As the fossils of G. disneyi as well as the rich recent and subfossil material of G. mortierii shows no evidence of such a change at all, G. disneyi more probably represents a case of parallel evolution at an earlier date. 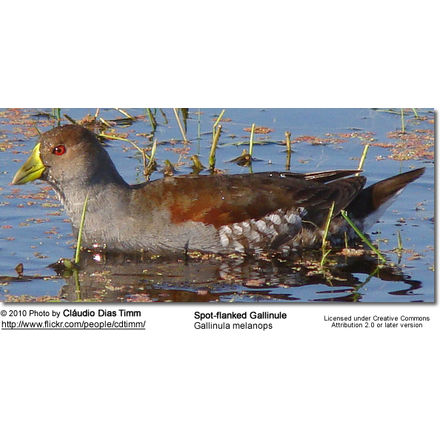 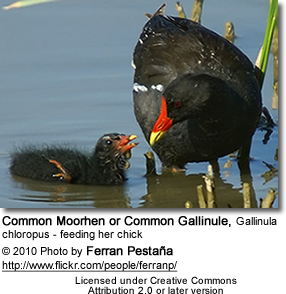