The Mountain Chickadees (Poecile gambeli) – also known as Mountain Titmice or Short-tailed Chickadees – are small songbirds found in the Americas. Colloquially these birds are referred to as “Cheeseburger Birds”, as their calls are rendered as “cheese-bur-ger.”

The Mountain Chickadees inhabit the mountainous regions of southwest Canada and the western United States. Their range extends from southern Yukon to California and the Rocky Mountain states in the United States, south to western Texas. They are most common in Oregon and northern California.

They tend to breed at elevations of 1.3 miles or 3 km above sea level and move to lower elevations for the winter. Other than those local altitudinal movements, they are believed to be sedentary (non-migratory).

Mountain Chickadees are well protected from the cold by the soft down next to their skin that provides insulation. Additionally, their outer contour feathers are waterproof and tight.

During the breeding season, these birds are typically seen in pairs or small family groups. Non-breeding birds may join multi-species feeding flocks at favored feeding sites. 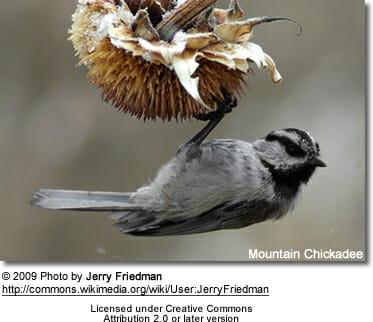 Upper plumage is grey; plumage below a paler greyish white. Black crown and throat, distinctive black “bib”, black stripe “through the eye” and white “eye brows” and cheeks. Back and flanks are grey.

Those found in the Rocky Mountain are buff on the back and sides. Their white “eyebrows” are broader.

Their primary diet consists primarily of insects (about 70%) – including beetles, ants, sawflies, caterpillars, spiders, gypsy moths, plant lice and cicadas; the rest consists of plant matter (30%), including conifer seeds and other plant seeds as well as wild berries (bayberries, poison ivy berries, among others).

They also frequent bird feeders for some sunflower seeds, cracked corn or suet.

These acrobats are frequently observed clinging to the undersides of branches and to tree trunks, as they search for food. They open seeds by hammering them with their beaks.

Breeding birds typically travel in pairs or small groups, but may join mixed-species feeding flocks after the breeding season.

Mountain Chickadees are monogamous. Most breeding activities are observed between April to July. Just before the breeding season, they split into pairs – often with the same partner as in past seasons.

These cavity nesters use natural cavities, abandoned woodpecker holes, birdhouses, or tree holes excavated by the pairs. Their nests are usually found at a height between 6.6 – 16 feet (2 – 5 meters). The nest construction usually takes a week. The bottom of the nest is lined with soft material, such as moss, plant fibers, hair or feather down.

The female lays 6 – 12 eggs, but averages 8 – 9 in a clutch. The white, brown-spotted eggs are incubated by the female for about 14 days. The male feeds the brooding female and protects the territory around the nest. The female typically remains on the nest, but may leave for short periods. Before doing so, she will cover the eggs to conceal them.

The hatchlings are completely helpless and remain in the nest for 20 – 21 days. Both parents feed and defend them.

They usually produce 1 to 2 broods a year.

Their calls are described as throaty chick-adee-adee-adees or a three or four shrill decending notes fee-bee-bay, or fee-bee-fee-bee.