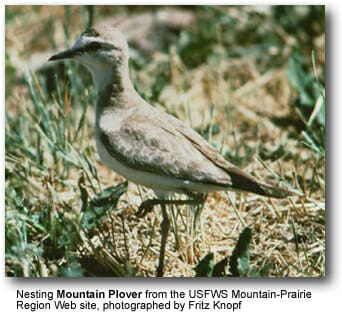 The Mountain Plover, Charadrius montanus, is a medium-sized ground bird in the plover family. It is misnamed, as it lives on level land. Unlike most plovers, it is usually not found near bodies of water or even on wet soil; it prefers dry habitat with short grass (usually due to grazing) and bare ground.

The Mountain Plover is 20–24 cm (8–9.5 inches) long and weighs about 105 grams (3.7 ounces). In appearance it is typical of Charadrius plovers, except that unlike most, it has no band across the breast. The upperparts are sandy brown and the underparts and face are whitish. There are black feathers on the forecrown and a black stripe from each eye to the bill (the stripe is brown and may be indistinct in winter); otherwise the plumage is plain. The Mountain Plover is much quieter than its more familiar relative the Killdeer. Its calls are variable, often low-pitched trilled or gurgling whistles. In courtship it makes a sound much like a far-off cow mooing.

It breeds in the high plains of North America from extreme southeastern Alberta and southwestern Saskatchewan to northern New Mexico and the Texas panhandle, as well as an isolated site in the Davis Mountains of West Texas. About 85 percent of the population winters in the San Joaquin and Imperial Valleys in California. Its winter range also extends along the U.S.-Mexican border, more extensively on the Mexican side.

The population is estimated at between 5,000 and 11,000. This is the result of a long-term decline, but in 2003 the U.S. Fish and Wildlife Service withdrew a proposal to list the Mountain Plover as a threatened species, stating that the population was larger than had been thought and was no longer declining.

Around late July, Mountain Plovers leave their breeding range for a period of post-breeding wandering around the southern Great Plains. Little is known about their movements at this time, although they’re regularly seen around Walsh, Colorado and on sod farms in central New Mexico. By early November, most move southward and westward to their wintering grounds. Spring migration is apparently direct and non-stop.

It feeds mostly on insects and other small arthropods. It often associates with livestock, which attract and stir up insects.

Mountain Plovers nest on bare ground in early spring (April in northern Colorado). They lay three eggs per clutch; the eggs are off-white with blackish spots. An unknown but possibly large fraction of females leave their first clutch to be incubated by the male and lay a second clutch, which they incubate. If the eggs survive various dangers, especially such predators as Coyotes, snakes, and Swift Foxes, they hatch in 28 to 31 days, and the hatchlings leave the nest within a few hours. In the next two or three days, the family usually moves one to two kilometers from the nest site to a good feeding area, often near a water tank for livestock.