The Luzon Racquet-tail Parrots – aka Palette Momot, Lorito-momoto Montano or Mountain Racket-tailed Parrots – are native to the island of Luzon, Philippines. This bird species inhabits subtropical or tropical moist montanes. 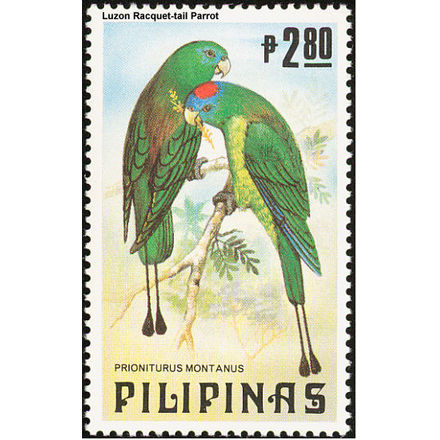 Distribution / Status in the Wild:

The Luzon Racquet-tail Parrot – aka Palette Momot, Lorito-momoto Montano or Mountain Racket-tailed Parrot – is native to the island of Luzon, Philippines. This bird species inhabits subtropical or tropical moist montanes. The nominate as well as the sub-species are endangered in their natural habitat and not known in aviculture or in the pet trade (Cites II).

The general plumage is green. The throat, breast and abdomen are slightly more yellowish-green. The forehead, front of crown, lores (the regions between the eyes and bill on the side of a bird’s head) and foreparts of cheeks are dull blue with bases of all feathers green. They have a large red patch to the back of crown. In some birds, the back may have an olive-green tinge. The underside of the flight feathers and the tail are greenish-blue. The upperside is green with middle two feathers elongated with blackish-blue spatule-shaped end-ings. The outer tail-feathers are green with blackish tips. The bill is of a bluish-horn colour with whitish tips. The irises are dark brown and the feet bluish-grey.

The immatures look like the females, but without the spatule-shaped endings. They attain their adult plumage after about two years.

Status in the Wild / Distribution: CITES II – Endangered … Distribution: Mounts Apo, Katanglad, McKinley on Mindanao in the Philippines. They can be found in mountain forest and open areas with remnant forest between 850 m (2,800 ft) and 2,300 m (7,700 ft); regularly visits rice paddies. They are only common in localities because of deforestation. They are .usually observed singly, in pairs or in small flocks flying high or foraging in trees. They are noisy and conspicuous in flight. Excellently camouflaged in trees and difficult to detect. They often feed in groups with other birds, such as pigeons and other parrot species.

They are unknown in aviculture and the pet trade.

Description: The Mindanao Racket-tailed Parrot average 11 ins (28 cm) in length. This species looks very similar to the nominate form described above – the Mountain Racket-tailed Parrot – except that it is smaller and has some color differences, such as a blue tinge to forehead and a paler and fainter eye area. The lores (the regions between the eyes and bill on the side of a bird’s head) and cheeks are greenish-blue and they lack the red patch on the back of green crown. The back and rump have a brownish tinge and the bend of the wing is washed with blue.

They are active, but quiet in trees. In flight, their can be very noisy with a penetrating and shrill call..

Status in the Wild / Distribution:

Female as montanus, but without blue to head; on average slightly larger.