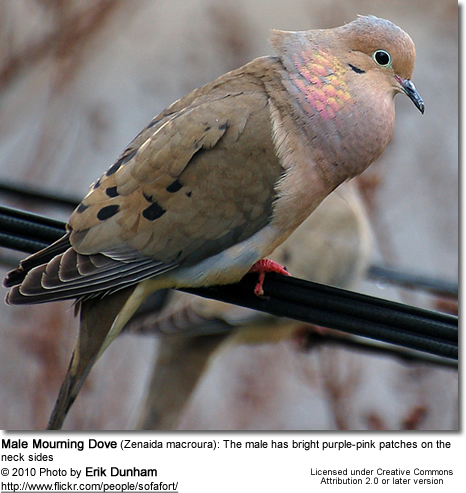 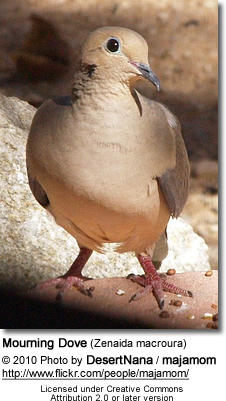 In folklore, it was believed that if one heard their calls around the house, someone in the house would die unless one tied a knot into each corner of one’s apron, after which the mourning dove would stop mourning and disappear.

They are amongst the most abundant of all North American birds; and one of the most common- backyard birds. They have well adapted to human-altered habitats; readily taking advantage of garden feeders; and nesting in artificial structures, such as hanging flower pots, on porch lights and under roofs. They are also popular game birds. It is estimated that up to 70 million of them are shot annually in the United States.

They are closely related to the extinct Passenger Pigeon (Ectopistes migratorius), which perished in the early 1900s due to hunting. Because of their close genetic relationship, the possibility of cloning the extinct Passenger Pigeon through the Mourning Dove is considered a possibility. Other close relatives of these doves are the Eared Doves (Zenaida auriculata) and the Socorro Doves (Zenaida graysoni). Mourning Doves are sometimes lumped together with the Socorro Doves (as one species), but differences in behavior, vocalizations and physical characteristics justify treating them as separate species. 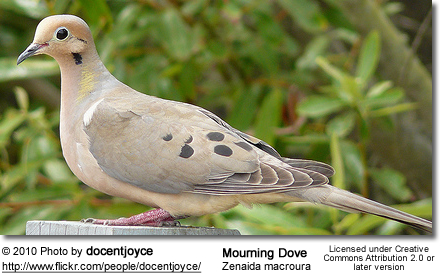 The range of the Mourning Doves stretches from southern Canada, throughout all of the lower 48 states of the United States, through much of Mexico and Central American to Panama.

These doves are also found on the islands of the West Indies is the Atlantic Ocean, as well as the Caribbean island of Cuba.

They are vagrants in northern Canada, Alaska and South America. They have been reported as far away as the British Isles, the Azores and Iceland.

These doves have been introduced to Hawaii and Pakistan. 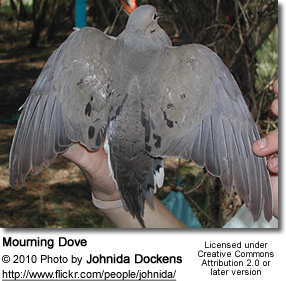 Both migratory and resident populations exist.

Mourning Doves are resident (non-migratory) in the southern parts of their range. Those found in the north are completely migratory. They breed up north and move south for the winter; specifically south from Canada. They spend the winters in southern United States through Mexico to Panama in Central America, or the West Indies.

Those breeding in the Canadian prairies move south for the winter. Populations in southern Central America only remain there in the winter and move back north for the breeding season.

The migration south usually takes place between September to November and they return north to their breeding territories in the spring – typically from March to May. Migrating birds may fly over 1000 miles or ~ 1,600 km to reach their breeding or wintering areas. These strong fliers are capable of speeds up to 55 mph (88 km/h).

Mourning Doves inhabit a number of habitats across this species’ wide range, including

Mourning Doves live in a wide range of open and semi-open habitats, including: 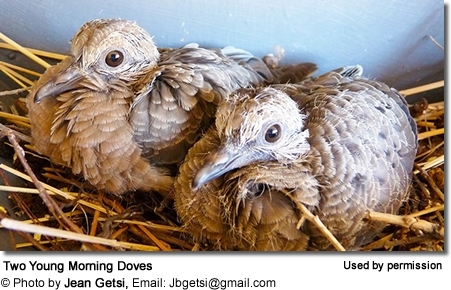 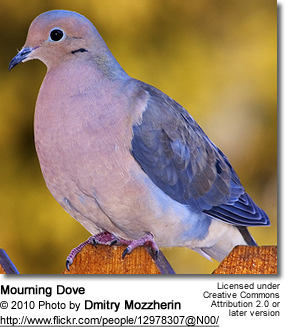 The similar White-winged Dove (Zenaida asiatica) can be identified by the blue eye-stripes, rounded tail and white wing patches 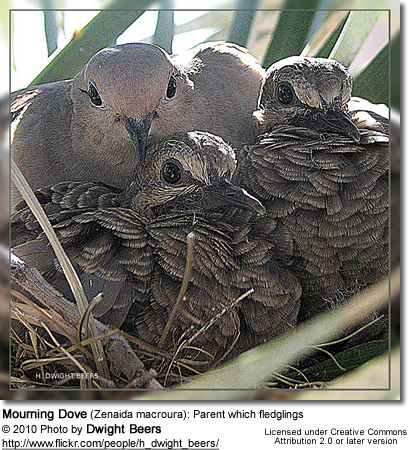 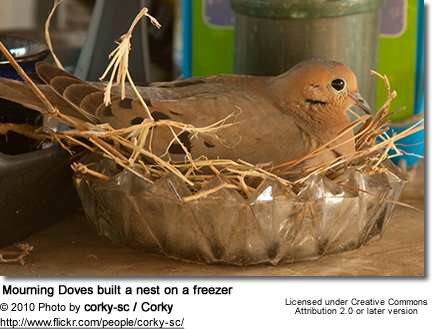 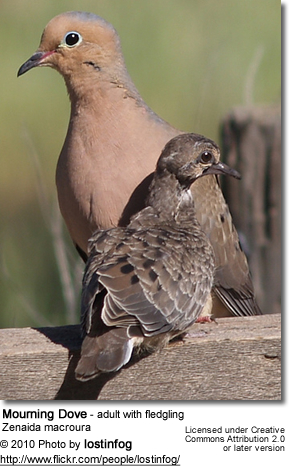 Breeding season: varies by region; in southern areas may commence as early as February and go on until October.

The male performs a courtship dance in front of the female that consists of a noisy flight followed by a circular glide with outstretched wings and his head lowered. Upon landing, he approaches the female noisily with his chest puffed up and bobbing head. Once she accepts him, they are observed preening each other.

These pigeons form strong monogamous pair bonds (only one mate) and typically remain in the same breeding territory. Some pairs stay together throughout the winter.

On the onset of the breeding season, the male leads the female to potential nest sites for her to choose from. Most nests are placed in trees, shrubs or vines. However, these doves are known to take advantage of artificial constructs, such as buildings, under bridges, or in hanging flower pots. They may even nest on the ground.

Once a location has been decided, the male will gather the nesting material and bring it to the female for her to build the nest with. The flimsy open cup nest is constructed of twigs, conifer needles and grass blades. Sometimes, they may reuse abandoned nests of other birds or squirrels. 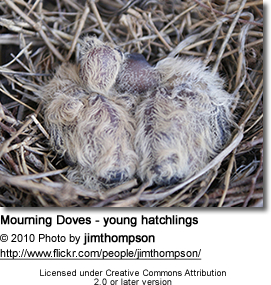 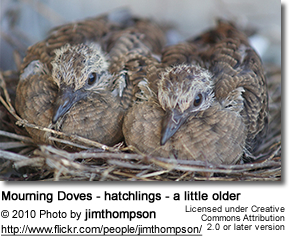 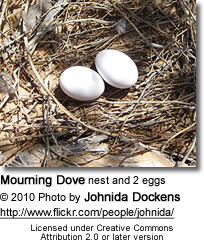 The average clutch consists of two small, white eggs. Occasionally, a female will lay her eggs in the nest of another pair, in which case 3 – 4 eggs can be found in one nest. Both male and female share the incubation of the eggs for about 14 to 15 days until hatching. Typically, the male incubates during the mornings into the afternoons, and the female the rest of the day and at night. The young are referred to as “squabs.” These devoted parents rarely leave the nest or their young unattended. If danger is detected near them, they will perform  nest-distraction displays, such as a broken-wing display, during which they flutter on the ground pretending to be injured and easy prey –  to draw the predator’s attention to them.

Both parents feed and protect the young. Initially – for about the first 3 or 4 days, the young are fed only crop milk – a substance produced in the crops of the parents. After that, the parents start adding seeds to the regurgitated food, slowly increasing the amount of seeds. The squabs leave the nest when they are about 12 – 15 days old. Soon after, the parents may get started on a new brood. In warm areas with ample food supplies, these prolific breeders are known to have produced five or six broods in a season. This may be essential to the survival of this species, as their mortality is high. Each year, adult mortality can reach 58% a year and only 69% of the young survive. 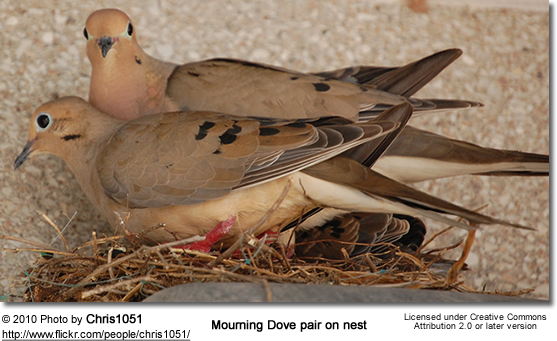 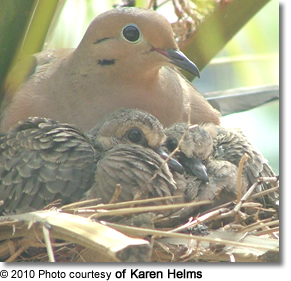 Contact call: cooOOoo-woo-woo-woooo, may be preceded by a grating or throat-rattling sound 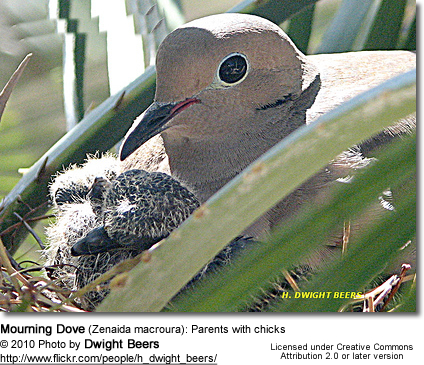 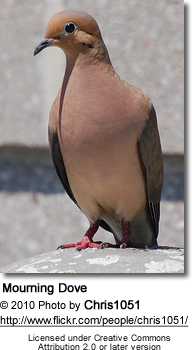 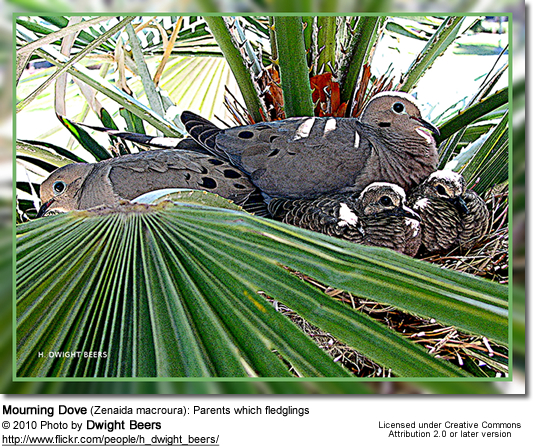 Their maximum lifespan in the wild is about 19.3 years; their average lifespan is 1.5 years. Their major threats are hunting in states where hunting of mourning doves is legal. In those areas, these doves tend to perish sooner.

Adults are also preyed upon by birds of prey such as falcons and hawks; their eggs and nestlings are often taken by black birds (corvids, grackles), domestic cats and snakes.

Mourning Doves reach reproductive age when they are about 85 days old. 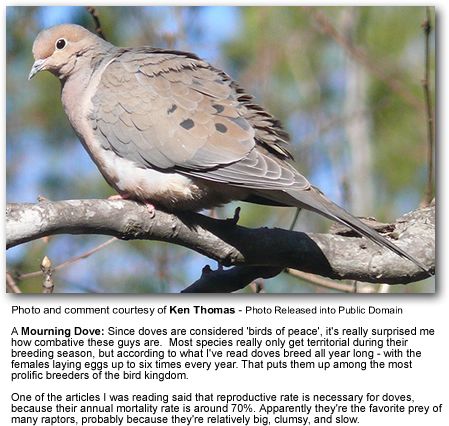