The most distinctive feature of the muscovy ducks is the featherless, bright “lumpy” red mask around their eyes and above the beak, which is larger in the male.

Muscovies have a “crest” on the top of their heads that they can raise at will.

Males will raise this crest to fend off other males or he raises his crest to impress the females.

The male is easily identified by his face mask alone – but also by his generally larger size – in fact, the adult male is usually twice the size of the female. The female’s appearance is generally more slender than that of the male.

The original color of the Muscovy is glossy blackish/brown and white, and most of them still are that color – with varying degrees of white, black or brown (“pieds”). Some of them are very light colored (mostly white), while others are mostly black/brown. The black / dark brown patches have an attractive iridescence to them that can only be seen in the right light conditions. 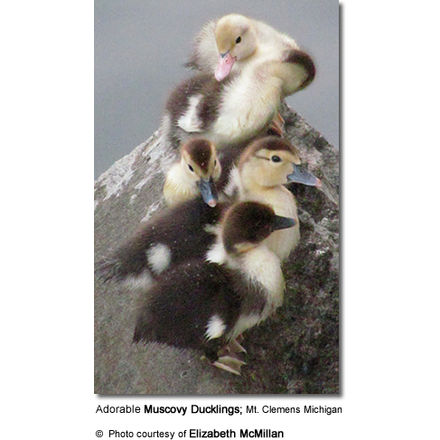 They have webbed feet and strong sharp claws for grabbing tree branches and roosting.

Their tail is fairly short, flat and wide..

… are as cute as can be. Most of them are variably yellow and brown; a few are all yellow and others all brown. They lack the bumpy face masks of the adults and have a more slender appearance.

They are very curious and friendly and will readily approach people looking for food (a somewhat trained response, as many people will gladly feed them to get a close-up look of them).

They are mostly seen following their mother as she is foraging for food.