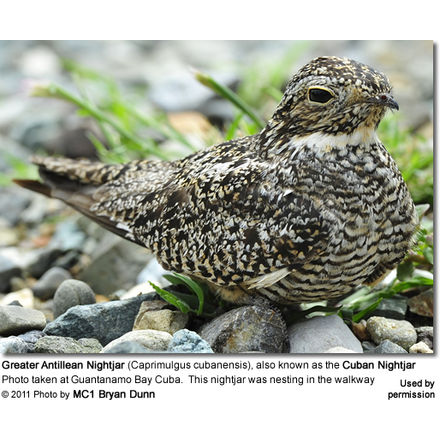 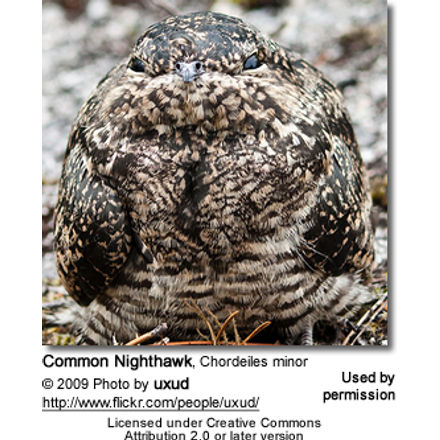 Nighthawks are birds of the nightjar family in the New World subfamily Chordeilinae.

Compared to the typical nightjars, nighthawks tend to have longer wings and tail, and the tail is often notched or forked – however, there are exceptions.

The nightjar, as suggested by the name, is strictly nocturnal. Throughout the day, it typically rest quietly in densely vegetated hiding places. At night, they become active as they hunt flying insects in more open landscapes, such as forest clearings, wetlands and along rivers.

Their cryptic appearance blends perfectly into their habitat and nighthawks are very difficult to spot during the daytime, when they are mostly hidden away sleeping. They are most easily detected at night when light from car headlights are reflected ruby-red from their eyes, as they are sitting on roads or tracks. However, their presence is most often made known by their loud calls given at dusk.

The name ” nighthawk” causes some confusion as it suggests that this might be a true hawk; however, this bird is not related to the hawk family, but was so named as it resembles the smaller hawks when observed in flight.

In the past, night-flying birds – such as the nighthawks – were suspected of witchery. 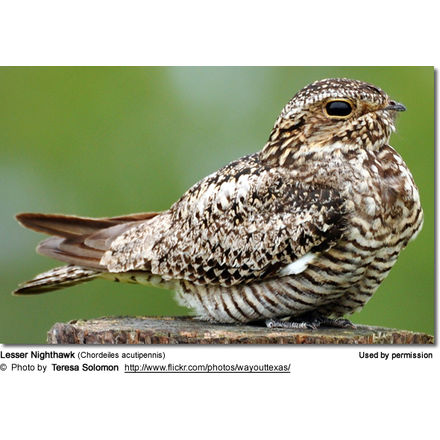 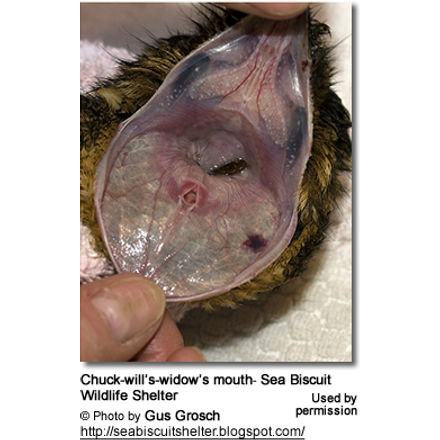 They are medium-sized nocturnal birds with long, pointed wings, short legs and very short bills that usually nest on the ground and catch flying insects.

The Least Nighthawk, at 16 cm (6.3 inches) and 23 grams, is the smallest of all Caprimulgiformes.

Nighthawks have short legs and weak feet and usually hop about awkwardly on the ground.

have small feet, of little use for walking, and long pointed wings. Their soft plumage is cryptically colored to resemble bark or leaves, offering perfect camouflage on the ground.

Juveniles resemble the female, except they have a less defined throat patch, the plumage is generally paler, and the barring of the underparts is more extensive.

Some species, unusual for birds, perch along a branch, rather than across it. This helps to conceal them during the day. 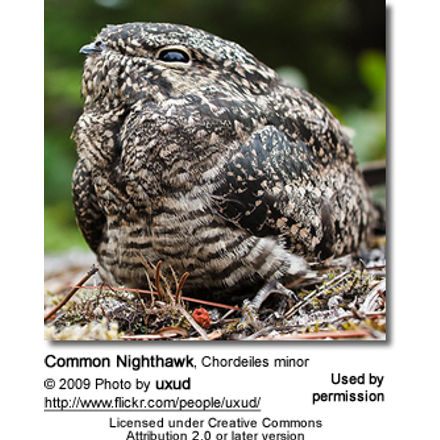 They have special physical adaptations that facilitate foraging at night and catching prey in mid-air, for example:

Nighthawks are similar in most respects to the nightjars of the Old World, but have shorter bills and less soft plumage.

Nighthawks are less strictly nocturnal than many Old World nightjars, and may be seen hunting when there is still light in the sky 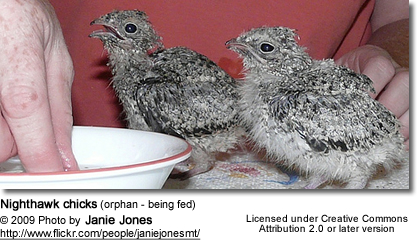 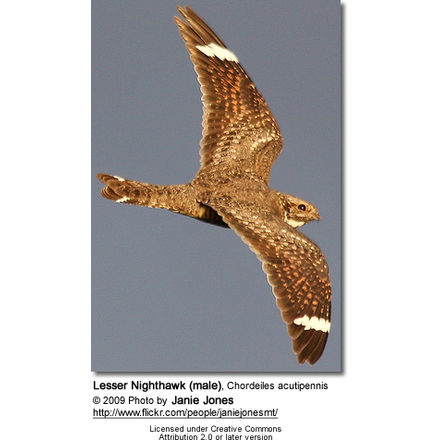 The male performs a dramatic aerial display during courtship, flying first at moderate height, then diving straight towards the ground. When he is about two meters from the ground, he will turn upward. Near the end of his steep dive a deep booming swo-o-o-onk sound that is caused by air rushing through his wingtips as he flexes his wings downward. The intensity of this sound is said to be more or less proportional to the speed attained. This dive is usually part of a courtship display, but can also be directed at rival nighthawks and intruders (including people).

She lays one to three patterned eggs directly on bare ground, sometimes in raised locations, including stumps or gravel roofs.

The incubation period is about 20 days. There is some controversy about the incubation of the eggs. There are reports that the incubation is performed mostly by the female with the male remaining nearby (J. H. Bowles, 1921 and T. G. Gentry, 1887); while others report that both the male and female share the duties of incubation, with the male incubating the eggs during the daytime and the female taking over at night (George H. Selleck, 1916 and Forbush, 1927).

Both parents feed the young. The young fledge when they are about 20 – 21 days old. 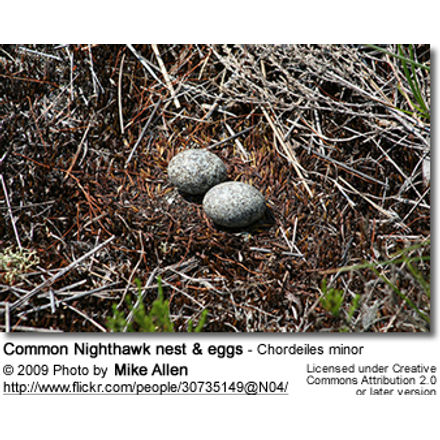 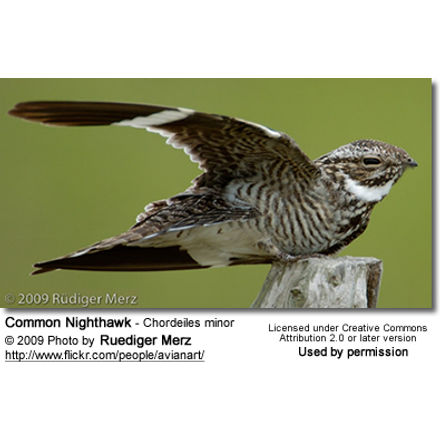 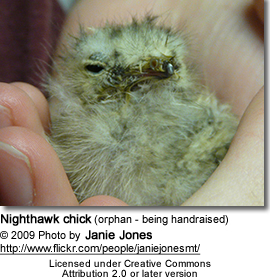 Nighthawks are known for imitating a wounded individual (a “broken wing” display) when an intruder approaches their nests. They mislead predators them into believing that they are an easy prey, ready for the taking. As soon as they have led them away from the nest, the nighthawk will take off.

Nighthawks will show aggression by raising their elongated wings in a vertical position and hissing at the intruder. 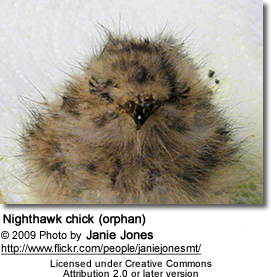 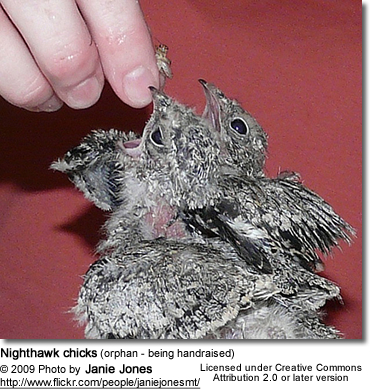 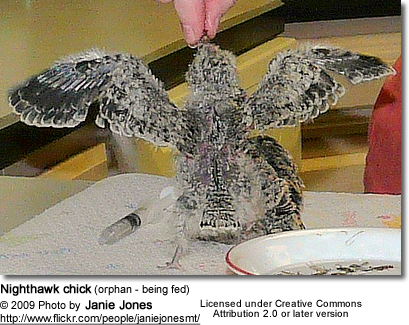 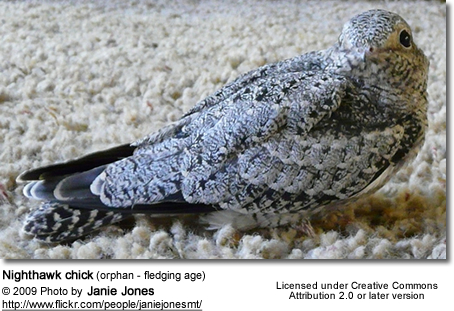