Nightjars or Nighthawks aka Goatsuckers

Nightjars are small to large nocturnal birds that are found around the world, except for the polar regions.

Some North American species are named as nighthawks.

They are sometimes referred to as goatsuckers, as they were often seen in fields together with goats and sheep, and the myth was born that they were there to suck milk from the teats of goats (the Latin word for goat-sucker or goat-milker is Caprimulgus).

However, instead they fed on the insects that were attracted to livestock. In the past, night-flying birds – such as the nightjars – were suspected of witchery.

The nightjar, as suggested by the name, is strictly nocturnal. Throughout the day, it typically rest quietly in densely vegetated hiding places. At night, they become active as they hunt flying insects in more open landscapes, such as forest clearings, wetlands and along rivers.

Their cryptic appearance blends perfectly into their habitat and they are very difficult to spot during the daytime, when they are usually hidden away sleeping. They are most easily detected at night when light from car headlights are reflected ruby-red from their eyes, as they are sitting on tracks or roads. However, their presence is most often made known by their loud calls given at dusk.

The common name of many of nightjars is is often derived from its call.

They inhabit desert regions, grassland and open wooded areas, and forests. They occur from sea-level up to 1,300 feet or 4,200 meters.

Eighty-nine species are currently known, with 6 species currently being threatened of extinction. Conservationists have noted that populations of Nightjars have been dramatically declining over the last years.

Typical nightjars may be capable of daily torpor – a strategy that allows them to reduce their body temperature as a means of saving energy during periods of low environmental temperature or low food availability.

It has already been recorded that the Common Poorwills (Phalaenoptilus nuttallii) can enter extended periods of hibernation as a means of surviving harsh conditions (Brigham, 1992) – which is unique amongst birds.

Other typical nightjars are suspected to be able to do so as well, although this has not been proven yet.

In contrast, the Common NIghthawks do not use torpor (Firman et al. 1993). 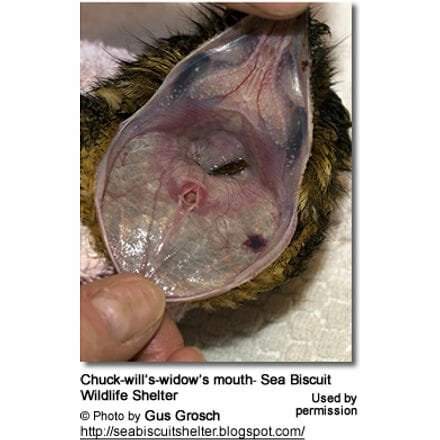 They have a variegated plumage is cryptically colored to resemble bark or leaves, which serves well to conceal them on the forest floors.

They have large eyes, large mouths yet very short bills, long wings and tail, and short legs. Their pointed wings and long tails gives them an overall body shape that is similar to that of a kestrel or cuckoo.

Their feet are weak and their legs short – and they usually hop about awkwardly on the ground.

Some species, unusually for birds, perch along a branch, rather than across it. This also helps to conceal them during the day.

These birds are mostly active in the late evening and early morning or at night.

Nighjars have special physical adaptations that facilitate foraging at night and catching prey in mid-air, for example: 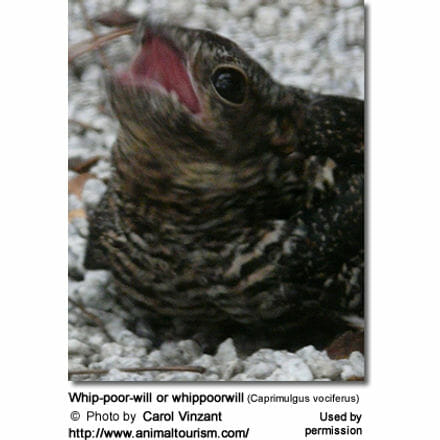 The male performs a dramatic aerial display during courtship, flying first at moderate height, then diving straight towards the ground. When he is about two meters from the ground, he will turn upward.

Near the end of his steep dive a deep booming swo-o-o-onk sound that is caused by air rushing through his wingtips as he flexes his wings downward.

This dive is usually part of a courtship display, but can also be directed at rival nighthawks and intruders (including people).

She lays one to three patterned eggs directly on bare ground, sometimes in raised locations, including stumps or gravel roofs. They particularly favor burned areas in forests.

The incubation is performed mostly by the female and takes about 20 days. Both parents feed the young. The young fledge when they are about 20 – 21 days old. 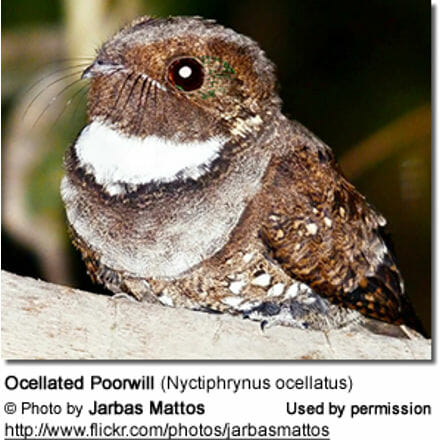 Nightjars have developed several behavioral adaptations to minimize predation of their nesting young and themselves: 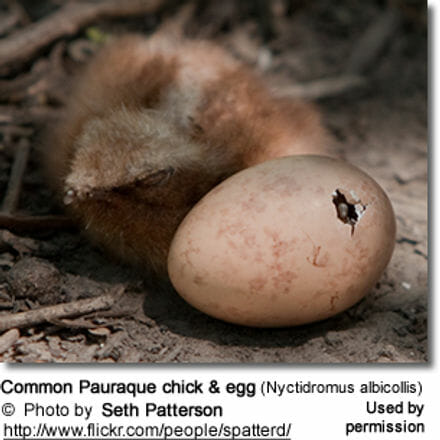