The Noisy Friarbird, Philemon corniculatus, is also known as “Leatherhead.” It is part of the honeyeater family, Meliphagidae.

This honeyeater inhabits much of New Guinea and eastern and south-eastern Australia, Its range stretches from Lakes Entrance and the Murray valley in Victoria, north through New South Wales and Queensland to Cape York and across New Guinea.

The Noisy Friarbird is found in most climate zones, extending into arid areas along rivers.

Its preferred habitat includes open dry forest areas and other woodlands, as well as coastal scrub and heath lands. They can also be seen around wetlands and wet forests.

This noisy and conspicuous bird is usually seen in small groups, often high up in trees. Its breeding season starts in the spring and stretches through the summer. 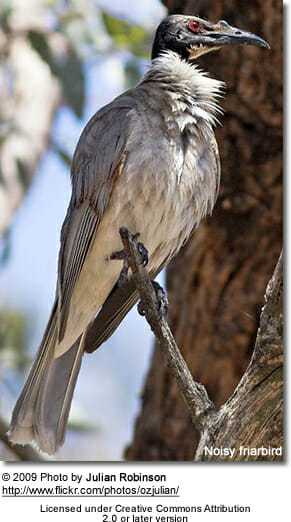 This large member of the honeyeater family measures 31-36 cm or 12-14 inches in length.

It has a distinctive black bald head, a mostly brown-grey plumage except for the chest and belly, which is a paler off white. It has red eyes and a strong bill with a prominent “bump” at the base.

The tail consists of silver-white feathers with a white tip.

The breeding season in their natural range usually commences in July and goes on until January. They may produce one or two broods during a season.

The nest is a large deep cup with an inverted lip or rim and made of bark and grass hanging from a horizontal branch 1-3 metres above the ground and usually well-hidden.

The average clutch size consists of two to four (rarely five) eggs, measuring 22 x 33 mm or 1 x 1⅓ inchces. The color of the eggs may be buff- to pale-pink splotched with darker pink-brown or purplish colors.

This honeyeater feeds on insects, nectar and native fruits. Their consumption of commercially grown fruit brings the Noisy Friarbirds into conflict with humans who regard them as pests.

As its name suggests, it is noisy; one of its calls has been likened to “Four o’clock”. At times, their constant cackling and chattering of the Noisy Friarbird can be heard throughout the forests. Their calls identify an individual’s feeding territory and announce the presence of food sources.

The Noisy Friarbird was first described by ornithologist John Latham in 1790. Molecular study shows its closest relative to be the Silver-crowned Friarbird within the genus Philemon.

DNA analysis has shown honeyeaters to be related to:

in a large Meliphagoidea superfamily.