The Northern Cardinals (Cardinalis cardinalis) are medium-sized, very popular songbirds found throughout the eastern half of the United States, most of Mexico, and northern areas of Central America.

In recent history, they have been expanding their ranges north and southwest facilitated by the increasing supply of food offerings at residential bird feeders and dense underbrush found in gardens and parks that serve them well for nesting.

Unlike many creatures that disappeared after urbanization, this bird species seems to have greatly benefited from it.

They are sometimes referred to as “Red Birds” “Common Cardinals” or “Virginia Nightingales.”

According to legend, these birds were named for the red color of the male’s plumage that is reminiscent of the red-robed Roman Catholic Cardinals and the crest of feathers on top of the head that bears a resemblance to a bishop’s mitre (formal headdress).

These strikingly beautiful songbirds were once prized as cage birds, but their sale is now banned in the United States, as they were given protection by the Migratory Bird Treaty Act of 1918. 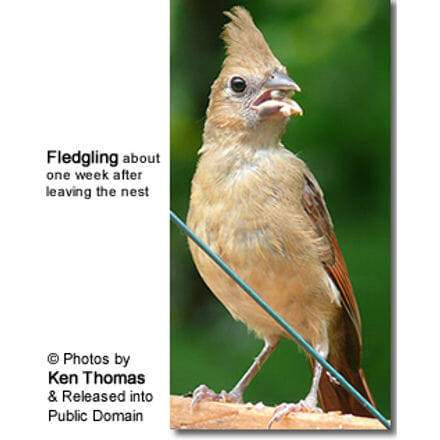 The Northern Cardinals are quite common throughout eastern and central North America.

Within their range, Cardinals are mostly resident, with most of them living within a mile of where they hatched. However, they may travel or relocate to avoid extreme weather conditions or to find areas with better food offerings, if sources in their areas are no longer readily available to support them. Young birds, in particular, may also disperse after being driven out of their parents’ territories as they are getting ready to breed again.

In the past few decades, these songbirds have expanded their range westward and northward taking advantage of readily available food supplies at residential feeders, as well as being attracted to the hedgerows and vegetation around houses for building their nests in. Moderate temperatures may also have helped. 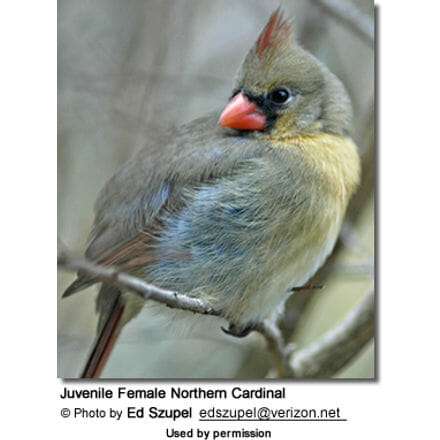 At the northern end of their range, they occur in southeastern Canada, in the provinces of Ontario, Quebec and Nova Scotia.

In eastern United States, they occur as far north as New England (comprising the US states of Maine, New Hampshire, Vermont, Massachusetts, Rhode Island, and Connecticut) and New York. Their range stretches west to South Dakota, Nebraska and Arizona; and south to the Gulf Coast states (including Florida).

From the USA, their range stretches south through Mexico to the Isthmus of Tehuantepec (the shortest distance between the Gulf of Mexico and the Pacific Ocean) as well as northern Guatemala and northern Belize in Central America.

Cardinals are found in semi-open habitats with nearby shrub or edges for nesting; including living at the edge of woodlands, shrublands, shrubby swamps and urban areas, such as gardens and parks with dense shrubbery.

In winter, most cardinals flock and roost together. During the breeding season they are typically seen alone or in pairs, and, they are quite aggressive as they are defending their breeding territories. Males, in particular, will forcefully defend their territories, chasing away other males and have even be observed attacking small red objects that they mistake for other males, or reflections of themselves in windows, mirrors or chrome.

They have short, corn-shaped, coral red bills, prominent raised head crests and long tails. The legs and feet are a dark pinkish-brown and the eyes (irises) are brown.

Males can easily be identified by their mostly brilliant red plumage and black face masks and bibs.

Females have a light brown or greenish-brown (olive) plumage with attractive reddish markings on the wings, tails and crests. The females’ face masks are lighter in color.

Immature birds resemble the adult females; but can be identified by the color of their bills, which is grey-black and as they mature will change to the coral red bill of the adult. Juvenile males typically molt into the bright red plumage of the adult male by the time they are about one year old; at which time they are also ready for breeding. 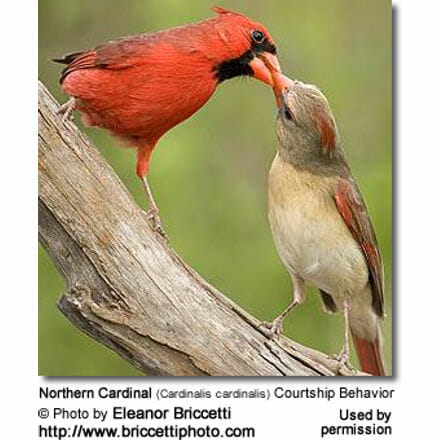 Northern Cardinals are serially monogamous – with pairs remaining together year-round. Some choose different mates for the next breeding season, while others remain together for several seasons.

Occasionally, polygyny occurs – where males will mate with other females. One study established that 9 – 35% of all nestlings where the result of extra-pair copulations.

Northern Cardinals breed between March and September. They usually raise two broods a year – one beginning around March and the second in late May to July. When ample of food is available, or if one of the clutches is destroyed, a third clutch may be laid. The males typically continue to raise the previous young, while the females are incubating the next clutch of eggs. The second or third nests are most likely to be parasitized by Brown-headed Cowbirds, who will lay their eggs into the nests of Cardinals to have their young raised by them instead.)

Once accepted by a female, the male collects foods and feeds the female as part of their bonding behavior. He can also be seen carrying nesting material to the female. The female uses this nesting material – which could include twigs, strips of tree bark and grass – to build the nest with. She breaks them up with her beak to make them pliable and pushes them with her body and feet into a cup shape. The nest is then lined with soft plant material, including stems, rootlets, pine needles, mosses, feather down, mammal hair – or whatever else she finds in the environment. The nest is typically 2 – 3 inches (5 – 8 cm) tall, 4 inches (10 cm) across and has an inner diameter of about 3 inches (~8 cm).

These nests are usually well-concealed in dense tangles of shrubs and vines or low trees about 3 – 10 feet (1 – 3 meters) off the ground. Cardinals are not known to reuse nests, and instead prefer to build new ones each season.

The nest typically takes about 3 to 9 days to build and about one to six days after completion of the nest, egg laying commences.

A clutch consists of 1 – 5 eggs, with 3 being the average. The eggs are glossy white with a hint of green, blue or brown – and marked with grey, lavender or brown blotches; and measure approximately 1 x .75 inches (2.5 – 2 cm) in diameter. These eggs are incubated for about 11 – 13 days, with the female being responsible for most of the incubation duties; although the male may assist as needed. For the most part, the male will bring food to the nesting female and guard the nest. The male will establish small territories surrounding the nest, chasing away other male cardinals and intruders.

The hatchlings are featherless, blind and completely dependent on parental care. The female typically remains on the nest and broods them for the first 2 – 3 days. Both the male and female feed the young a diet of insects and keep the nest clean by removing fecal sacs.

The nestlings fledge (leave the nest) another 9 – 11 days after hatching and are able to fly within 20 days. They are independent when they are 25 – 56 days old, at which point they are typically driven out of their parents’ territory and join flocks of other juveniles. 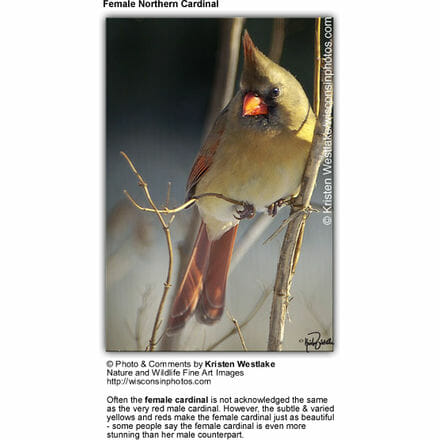 Cardinals mostly feed on weed, safflower and sunflower seeds (favoring seeds that are easily husked); as well as waste grains (corn and oats), and various wild fruits and berries – all of which makes up about 90% of their diet. They are important seed dispersers, and will readily adapt to taking advantage of backyard birdfeeders, where they are welcomed and attractive visitors.

To a lesser extent, they will also eat insects (such as beetles, cicadas, grasshoppers, spiders); slugs, snails, nuts, flowers and buds.

They will drink maple sap dripping from tree holes made by sapsuckers; and drink water from bird baths, streams and ponds by scooping the water into the lower bills and tipping their heads back.

During the winter months or at other times when food isn’t readily available, they may resort to feeding on the carcasses of other birds.

Chicks have a higher requirement for protein and are almost exclusively fed on insects. 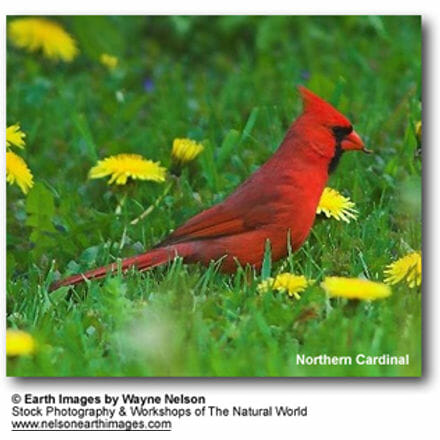 Pairs often develop song phrases that only they have in common. The nesting female often sings from the nest calling her mate.

Singing is part of courtship behavior, as well as serving as territorial announcements or defense. Their contacts and alarm calls are loud, metallic “chips” or “chink” notes. The frequency and volume of these notes increase as the threat becomes greater.

Chicks have a high mortality rate as they are commonly preyed on by other birds, reptiles or mammals. However, the annual survival rates for adult Cardinals have been estimated at 60 to 65%; if one takes into account the high mortality of juveniles, the average lifespan is only about a year.

They reach reproductive age when they are about 1 year old.

Cardinals (eggs, nestlings and adults) are preyed upon by …