It’s binomial name Casuarius unappendiculatus, can be broken down to Casuarius is kesuari Malay for cassowary. unappendiculatus means unus, one, appendicis, appendage, -culus, diminutive, and -atus, provided with: cassowary provided with one small appendage, refering to the single wattle. Officially, there are no sub-species, however, some authors list several sub-species.

Edward Blyth first identified the Northern Cassowary from a specimen from an aviary located in Calcutta, India., in 1860.

It has hard and stiff black plumage, blue facial skin and a casque on top of the head. It has a bright red or yellow colored neck and wattle. The feet are huge and strong with long, dagger-like claw on its inner toe. Males and females look alike. The male, at 37 kilograms (82 lb), is smaller than female, at 58 kilograms (130 lb). These birds are between 165–175 cm (65–69 in) in height.

The Northern Cassowary is distributed and endemic to coastal swamp and lowland rainforests of northern New Guinea and the islands of Yapen Batanta and Salawati. They prefer elevations below 490 m (1,600 ft). 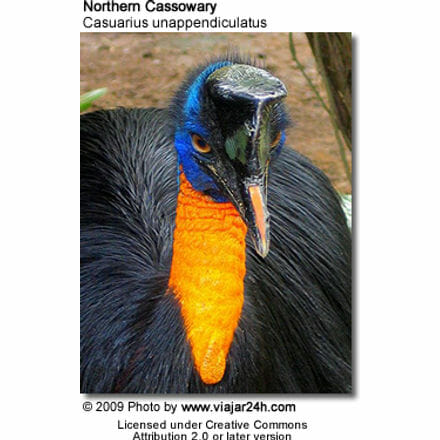 In breeding season, the polygamous female lays three to five green eggs on a well camouflaged nest prepared by male, she leaves the nest and eggs to find another mate. The male raises the chicks alone for about nine months.

Due to ongoing habitat lost and overhunting in some areas, the Northern Cassowary is evaluated as Vulnerable on the IUCN Red List of Threatened Species, with hungting being the biggest threat. Native people use the bones and eggs, and take the chicks to be raised for meat. As logging opens up more areas of the forest, hunting will be more of a problem. Their occurrence range is 186,000 km2 (72,000 sq mi) and a 2000 estimate placed their numbers at 9300.