The Northern Gannet (Morus bassanus, formerly Sula bassana) is a seabird and is the largest member of the gannet family, Sulidae.

Young birds are dark brown in their first year, and gradually acquire more white in subsequent seasons until they reach maturity after five years. 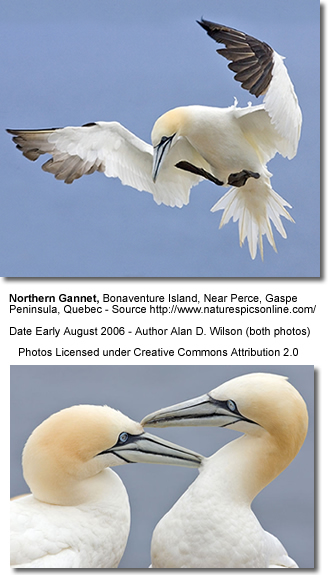 Their breeding range is the North Atlantic. They normally nest in large colonies, on cliffs overlooking the ocean or on small rocky islands. The largest colony of this bird, with over 60,000 couples, is found on Bonaventure Island, Quebec, but 68% of the world population breeds around the coasts of Great Britain, with the largest colonies on the Bass Rock (whence the species’ Latin name) and Boreray, St Kilda.

In the United Kingdom, gannets are a protected species. However, a legal exception is made for the inhabitants of the town of Ness (also known as Port Nis) of the Isle of Lewis who are allowed to kill up to 2000 gannets (locally known as guga) annually to serve as a traditional local delicacy — the taste is described as fishy.

Many of these gannets are taken from Sula Sgeir which is itself named after them.

They are migratory and most winter at sea, heading further south in the Atlantic.

These birds are spectacular divers, plunging into the ocean at high speed. Although they are powerful and agile fliers, they are clumsy in takeoffs and landings. They mainly eat small fish (2.5-30.5 cm in length) which gather in groups near the surface. Virtually any small fish (roughly 80-90% of the diet) or other small pelagic (open sea) species (largely squid) will be taken opportunistically. Various cod, smelt and herring species are most frequently taken.

Although Northern Gannet populations are now stable, their numbers were once greatly reduced due to loss of habitat, removal of eggs and killing of adults.

Predators of eggs and nestlings include great black-backed and herring gulls, common ravens, Short-tailed Weasels and red fox. The only known natural predator of adults is the bald eagle, though large sharks and seals may rarely snatch a gannet out at sea.

Old names for the Northern Gannet include solan, solan goose and solant bird.