The Ocellated Turkey (Agriocharis ocellata) is a large bird around 70-90 cm long and 3 kg (female) to 4 kg (male) weight.

In the past, this turkey has sometimes been treated in a genus of its own, as Agriocharis ocellata, but the differences between this species and Meleagris gallopavo are too small to justify generic segregation. 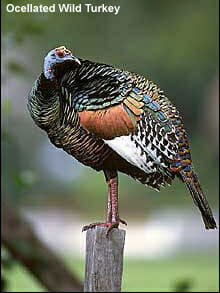 The Ocellated Turkey exists only in a 50,000 square mile area comprised of the Yucatán Peninsula range includes the states of Quintana Roo, Campeche and Yucatan, as well as parts of southern Tabasco and northeastern Chiapas.

The body feathers are a mixture of bronze and green iridescent color. Although females can be duller with more green, the breast feathers do not generally differ and can not be used to determine sex. Neither sex have beards.

Tail feathers of both sexes are bluish-grey with an eye-shaped, blue-bronze spot near the end with a bright gold tip. The spots, for which the Ocellated is named, lead some scientists to believe that the bird is more related to peafowl than to Wild Turkey descriptions.

The upper, major secondary wing-coverts are rich iridescent copper. The primary and secondary wing feathers have similar barring to that of North American turkeys, but the secondaries (shorter, upper “arm” feathers) have more white, especially around the edges.

Both sexes have blue heads with some orange or red nodules, which are more pronounced on males. The males also have a fleshy blue crown covered with nodules, similar to those on the neck, behind the snood.

The legs are deep red and are shorter and thinner than on North American turkeys.

Males over one year old have spurs on the legs that average 1.5 inches, which lengths of over 2 inches being recorded. These spurs are much longer and thinner than on North American turkeys.

Ocellated Turkeys are much smaller than any of the subspecies of North American Wild Turkey, with adult hens weighing in at about 8 pounds before laying eggs and 6-7 pounds the rest of the year, and adult males weighing about 11-12 pounds during breeding season. 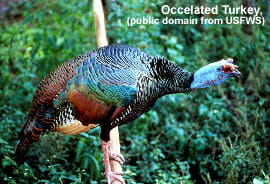 Turkeys spend most of the time on the ground and often prefer to run to escape danger through the day rather than fly, though they can fly swiftly and powerfully for short distances as the majority of birds in this order do in necessity.

Roosting is usually high in trees away from night hunting predators such as Jaguars and usually in a family group. Female Ocellated Turkeys lay 8-15 eggs in a well concealed nest on the ground. She incubates the eggs for 28 days.

The young are precocial and able to leave the nest after one night. They then follow their mother until they reach young adulthood when they begin to range though often re-grouping to roost.

The voice is similar to the northern species too, the male making the “Gobbling” sound during the breeding season, while the female bird makes a “clucking” sound.