The Orange-winged Parrot, Amazona amazonica, is a large Amazon parrot. It is endemic to the tropical areas in South America, from Colombia, Venezuela, Equador, Trinidad and Tobago south to Peru, Northern Bolivia, Central Brazil, and South-Western Mato Grosso. 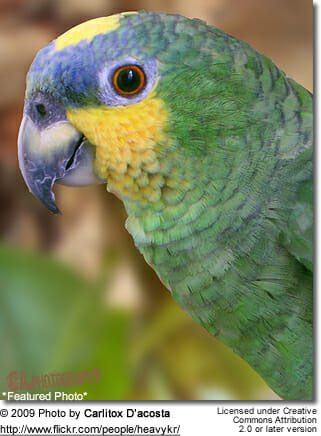 The Orange-winged Parrot lays three to five white eggs in a tree cavity, which are incubated by the female for 25 – 27 days, with a further two months to fledging.

They are often confused with Blue-fronted Amazons. However, the orange-winged amazons are the only amazon with orange feathers in their wings, thus the name Orange-Winged Amazon. The color flight feathers in the Blue Fronts are red.

The plumage is mainly green with a blue forehead, some yellow on the crown, cheeks and outer tail tips, and an orange speculum (= distinctive wing patch) . The beak is horn-colored with a gray tip. The feet are pale grey / horn brown. 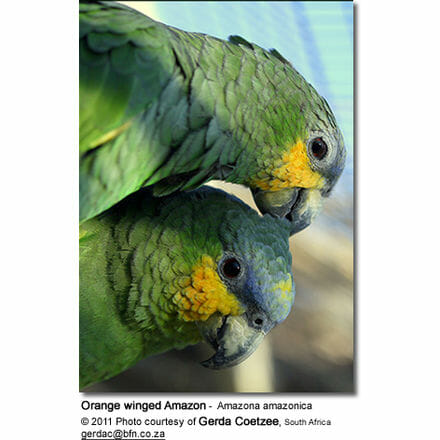 Orange Winged Amazons are considered to be temperamental – even more so than the Blue-fronted Amazons, which may present some challenges to the owners. However, they are quick learners and adapt well to most situations.

Amazon ownership generally presents multiple challenges, such as excessive chewing – especially at certain stages in their life. They do discover their beaks as method of “disciplining us” once they are out of the “baby stage” and they can generally be somewhat naughty, and it really is important to learn to understand them and to guide their behavior before an undesirable behavior has been established.

They regard anything in your home as a “toy” that can be explored and chewed on; destroying items that you may hold dear or are simply valuable.

The Orange-winged Amazon (Amazona amazonica) is large parrot that occurs in tropical South America, from Colombia, Trinidad and Tobago south to Peru and central Brazil.