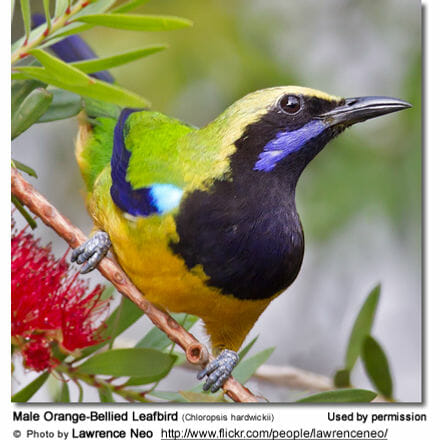 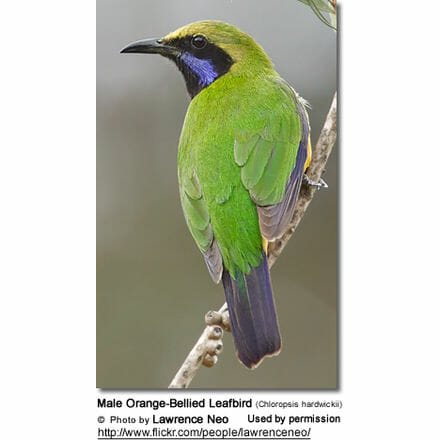 The Orange-Bellied Leafbirds (Chloropsis hardwickii) are small, colorful songbirds that are native to the eastern Himalayas and south China to the Malay Peninsula, where they rarely descend below 3,300 feet (~1000 m). They are resident (non-migratory) within their range and usually remain high up in the canopy of trees searching for insects to feed on.

The Orange-bellied Leafbirds were named for their orange belly. The back is green and the tail and wings have blue markings. There is a black and blue patch over the throat and chest.

Leafbirds were named for the fact that their mostly green plumages blend in well into their tropical habitat, where the green leaves and bright flowers of the canopy provide a perfect camouflage for these birds. However, leafbirds that are stressed will shed most of their colorful feathers. This adaptation may have evolved as a way of confusing predators, such as snakes. Captured birds under stress will do the same.

They have forked, brush-tipped tongues and fairly hefty, long, down-curved bills with stiff, hair-like feathers at the base that protect their eyes from the legs and wings of their insect prey.

The males and females can easily be differentiated, as the females are less colorful.

Immature birds look like duller versions of the females.

Leafbirds resemble bulbuls, but can be identified by their brighter plumages. 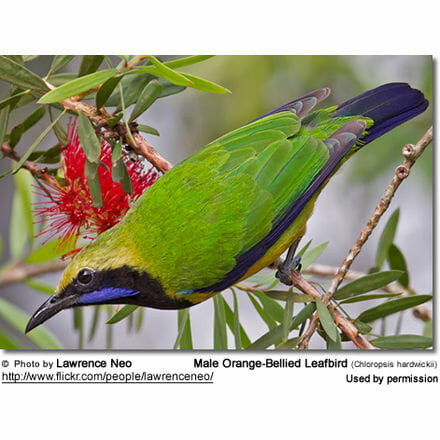 Orange-bellied leafbirds construct their open cup-shaped nests from roots, fine stems, leaf parts, rootlets and fibers which are suspended from the edges of twigs at the end of tree branches.

The average clutch consists of 2 – 3 pinkish eggs. The incubation lasts about 14 days and is performed by the female alone, while the male feeds the brooding female. Even though unconfirmed, it appears likely, that the male also helps raise the young.

Leafbirds typically forage alone or in pairs in the subcanopy; but some species may occasionally join mixed feeding flocks, while other species defend their feeding territories.

They feed on mostly insects, as well as taking fruits, berries and nectar.

Insects: Their long sharp beaks are curved down slightly and a brush tipped tongue, helping them to pick insects from the bark and leaves of trees. They will also pursue flushed prey into the air or down to the forest floor.

Nectar: Their spiked tongues are well adapted for taking nectar from tubular flowers, such as the Rhabdornis of the Philippines. Like hummingbirds, they will hover in front of a flower while retrieving the nectar. In the process of feeding, the flowers benefit from cross-pollination as the leafbird’s head becomes covered with pollen and spreads from flower to flower. As they move to the next flower, the pollen is deposited on the next flower, which is then able to produce seeds and fruit. Many native plants rely on them for pollination and would not be able to exist without the “services” inadvertently rendered by the leafbirds.

Fruits: Usually, leafbirds swallow pieces of fruit whole. If this isn’t possible, they will pierce the fruits with their beaks and let the juices leak into their mouths. 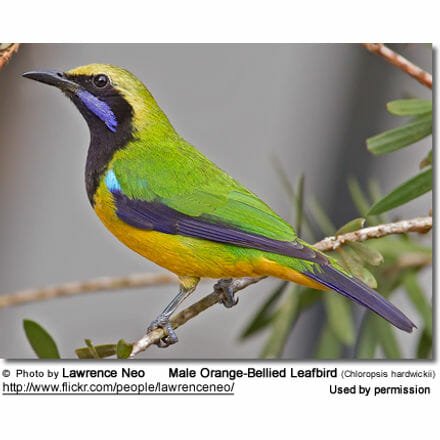 Their attractive songs include various melodious whistles and chatters.