The Oriental Dwarf Kingfisher (Ceyx erithaca / Ceyx erithacus) – also known as the Black-backed Kingfisher or Miniature Kingfisher – is the smallest kingfisher species; being only slightly larger than a medium-sized hummingbird.

Like other kingfishers, it is brightly colored, with a large and powerful bill. 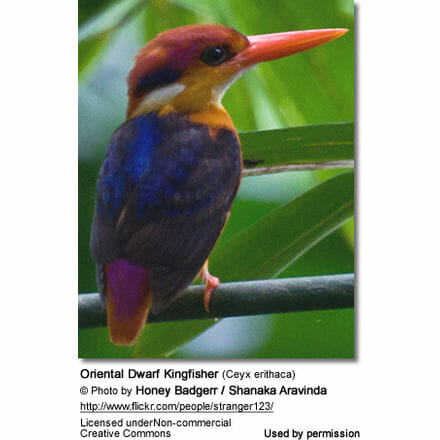 The Oriental Dwarf Kingfisher’s territory encompasses a huge geographical area. It is endemic across much of Southeast Asia, South China and the Indian Subcontinent, and It can be found in Bangladesh, Bhutan, Brunei, Cambodia, India, Indonesia, Laos, Malaysia, Myanmar, Singapore, Sri Lanka, Thailand, and Vietnam. Its preferred habitat includes areas that include small streams in densely shaded, lowland forests.

They are usually found near small streams in densely shaded, lowland forests.

In Borneo, spotting an Oriental Dwarf Kingfisher is considered a bad omen by warriors of the Dusun tribe. 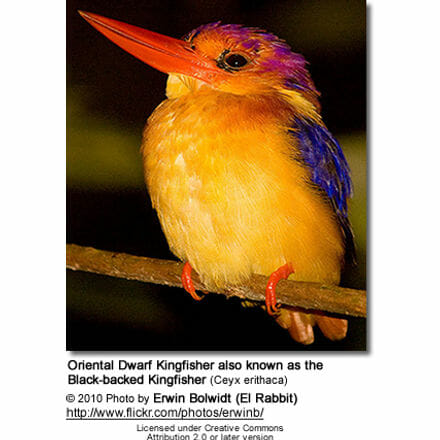 The Oriental Dwarf Kingfisher is the most brightly colored and the smallest of all kingfisher species, measuring only between 5 – 5.5 inches (13 – 14 cm) in length – including bill and tail; and weighs about 0.5 oz or 14 g. The largest kingfisher is the Giant Kingfisher (Megaceryle maxima) with an average length is 18 inches (45 cm) and a weight of about 13.5 oz (355 g).

It is easily recognized by its bright blue crown with a violet wash along on the sides of its otherwise orange head. The upper plumage is bluish-black with glossy blue lines. The throat is white with bright orange colored lines in the bottom. The under plumage is a brilliant orangey-yellow. The bill and feet are orangey-red.

The juvenile plumage is less colorful.

Like other kingfisher species, the Oriental Dwarf Kingfisher hunts from a perch. However, instead of fish (the typical diet of the kingfisher), it mainly feeds on insects, as well as small lizards or frogs, if the opportunity arises.

Before eating lizards or frogs, it kills them by holding them in the beak and continually hitting them against a stone or tree stump.

In southwestern India, they begin to breed in June – with the onset of the Southwest Monsoon. In other areas, their breeding season stretches from October to December.

The nest is a horizontal tunnel or burrow on a bank up to a meter in length. The nests are constructed by both males and females. They will take turns burrowing out a tunnel with their feet, and then they will hollow out a narrow chamber at the end of the tunnel in which to lay their eggs.

The birds will spend between three and seven days working to complete their tunnel. Some birds attack their worksites so forcefully that they have fatally injured themselves as they fly into the tunnels during these excavations. Nests constructed in hard, less penetrable ground will have tunnels that are shorter than those dug into sand or soft soil. Kingfishers are fiercely territorial in defense of their nests.

The clutch usually consists of 3 to 6 eggs, which are incubated by both the male and female for about 17 days. The chicks are fed with geckos, skinks, snails, frogs, crickets and dragonflies.

The hatchlings are altricial (without any down, blind and helpless) and they require care and feeding by the parents, who bring the food into the nesting chamber and keep them warm.

However, the nestlings grow quickly and soon they are able to travel toward the entrance of the tunnel where they encounter the adults and wait to be fed. Eventually, they are fed on a perch near the entrance. Fledging can last a few days to a few weeks. After that, the chicks will be on their own and will feed themselves.

The young fledge (leave the nest) when they are about 20 days old. A second brood may be raised if the first nesting attempt was unsuccessful.