The Oriental White-eye, Zosterops palpebrosus, is a small passerine bird in the white-eye family.

It is a resident breeder in open woodland in tropical Asia east from India to China and Indonesia.

They forage in small groups, feeding on nectar and small insects. They are easily identified by the distinctive white eye-ring and overall yellowish upperparts.

Several populations of this widespread species are named subspecies and some have distinctive variations in the extent and shades of yellows in their plumage.

This bird is small (about 8–9 cm long) with yellowish olive upper parts, a white eye ring, yellow throat and vent. The belly is whitish grey but may have yellow in some subspecies. The sexes look similar. The species is widespread and is part of a superspecies complex that includes the Japanese White-eye (Zosterops japonicus), the Lowland White-eye (Zosterops meyeni) and possibly others. The taxonomy of the group is still unclear with some island populations being distinctive while some subspecies are not well supported. The population from Flores, Indonesia for instance is found closer to the Pale White-eye. The family itself is now questioned since they are nested along with the Stachyris babblers.

About eleven subspecies are well recognized. These include the nominate form (type locality Bengal, India) which is found from Oman and Arabia, Afghanistan, northern India and extends into China and northern Myanmar.

The population in the Western Ghats and hills of southern India is placed in nilgiriensis while salimalii of the Eastern Ghats hills (Shevaroy, Chitteri, Seshachalam, Nallamalai) is sometimes subsumed into the nominate race.

The population of the plains of India, Laccadives and Sri Lanka are sometimes placed in egregius (= egregia) but is restricted by other works to the population in Sri Lanka.

The populations in southern Myanmar, Thailand and Laos are placed in siamensis. The Nicobar Islands form is nicobaricus and is sometimes also used for the population on the Andaman Islands which are however distinctive and a distinct unnamed population.

Race occidentis (now often subsumed into the nominate race) of the Western Himalayas has the upper side dark green and the flanks are tinged in brown. The form salimalii has a shorter bill and is brighter yellow-green above. Some authors consider the nominate race to be restricted to Sikkim, Bhutan, Assam and Yunnan and consider the peninsular race as occidentis (or amabilis if the form from Kathiawar described by Koelz is considered valid.

In Sri Lanka, race egregia is smaller and has a brighter back and throat than the endemic Sri Lanka White-eye, Zosterops ceylonensis found in the central hills.

The English and scientific names refer to the conspicuous ring of white feathers round the eyes, zosterops being Greek for ‘girdle-eye’. 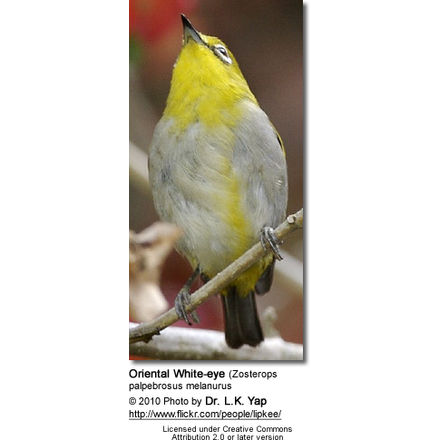 The species is found in a wide range of habitats from scrub to moist forest. They sometimes occur on mangrove areas such as in the Karachi area. and on islands they may lead a more insectivorous life. They are somewhat rare only in the drier desert regions of western India.

A feral population was detected in San Diego, California in the 1980s and subsequently eradicated.

These white-eyes are sociable, forming flocks which only separate on the approach of the breeding season. They are highly arboreal and only rarely descend to the ground. The breeding season is February to September but April is the peak breeding season and the compact cup nest is a placed like a hammock on the fork of a branch. The nest is made of cobwebs, lichens and plant fibre. The nest is built in about 4 days and the two pale blue eggs are laid within a couple of days of each other. The eggs hatch in about 10 days. Both sexes take care of brooding the chicks which fledge in about 10 days. Though mainly insectivorous, the Oriental White-eye will also eat nectar and fruits of various kinds.

They call frequently as they forage and the usual contact call is a soft nasal cheer. They pollinate flower when they visit them for flower insects (such as thrips) and possibly nectar (questioned) that form their diet. The forehead is sometimes colored by pollen leading to mistaken identifications. They have been observed bathing in dew accumulated on leaves.

When nesting, they may mob palm squirrels but being small birds they are usually on the defensive. Their predators include bats (esp. Greater False Vampire Bat, Megaderma lyra) and birds such as the White-throated Kingfisher. Endoparasitic Haemosporidia of the genus Haemoproteus and Dorisa have been isolated from the species although these rarely cause death.

Like some other white-eyes, they sometimes steal nest material from the nests of other birds. Cases of interspecific feeding have been noted with white-eyes feeding the chicks of a Paradise Flycatcher.

Although not strong fliers, they are capable of dispersing in winds and storms to new areas including offshore islands. A feral population of this species established itself in California during the 1980s requiring their capture and destruction. They were captured by luring them using call playback and live decoys into mistnets.