Their life expectancy is about 7 – 8 years and their most productive breeding age is from the 2nd to 5th year.

Painted Finches are Australian natives that occur naturally in the drier, arid areas of northwestern Australia through the Northern Territory and into Queensland and south to northern and central Southern Australia.

In Western Australia, they are found in the Kimberley Division and Pilbara Region in the north south to Carnarvon.

In the Northern Territory, they are most common in and around Tennant Creek south to the Ayers Rock.

In Queensland, they occur in the western regions east to Mount Isa and Longreach.

They range south into Southern Australia, where they are mostly found around Lakes Eyre, Torrens and Frome and the Flinders Ranges.

Their preferred habitats are semi-desert areas, grasslands, rock areas, and subtropical (lowland) dry grasslands. They are often found near permanent or semi-permanent bodies of water.

These desert birds are exposed to wild swings in temperature ranging from near freezing to the hot summer desert heat. 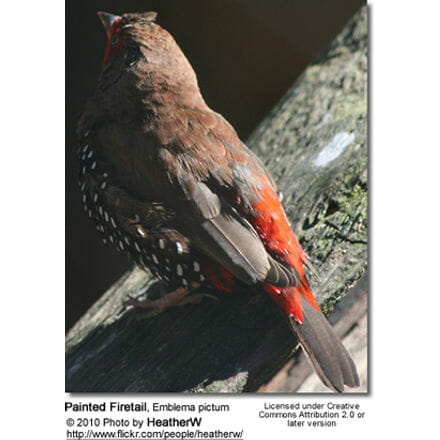 Adult males have a brownish black upper plumage and are mostly black with white spots below. The face, chin, throat and rump are bright red. There is a vertical red bar from the chest to the abdomen.

Adult females either lack or have fewer red markings on the face and chest. They have duller and greyer lores (areas between the bill and the eyes), pale eye rings and a narrower chest band. They have larger white spots on the side.

Mutations: Several color mutations have occurred in captivity, including fawn, pied and yellow (where the red markings are replaced by yellowish / orange).

The bill is reddish, except for a pale blue base to the lower bill.

Immature birds have less red on the face and a brownish rump (instead of red). They attain their adult plumage when they are about 4 months old. 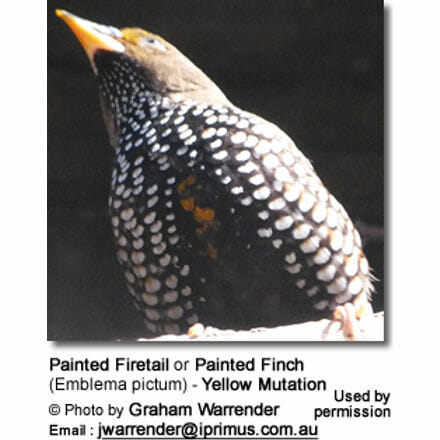 Painted Firetails mostly feed on seeds found on the ground. They also take insects and their larvae – even more so during the breeding season.

Captive birds are usually provided with a standard finch diet, in addition to hard-boiled eggs, sprouted seeds (such as canary seeds), grains, mixed millet sprays, greens, fruits, vegetables and live foods (such as white and meal worms, small crickets and locusts). They particularly enjoy soft food of any kind.

Painted Finches are monogamous and pairs usually form before they obtain their adult plumage. In the wild, they typically breed between January and August.

Males construct small, round nests close to the ground (below a height of about 5 feet or 1.5 meters) with a wide entrance hole. He uses twig, roots, grasses and other plant material. The females will line their nests with soft grasses and feathers. Nests are often reused for subsequent clutches.

The normal clutch consists of 3 – 5 white eggs, which are incubated by the female during the night and during the day, both parents share this task.

The young emerge about 14 – 19 days later. The chicks fledge when they are about 21 days, but continue to be fed by their parents for another four weeks or so.

They may produce up to 3 clutches a year. 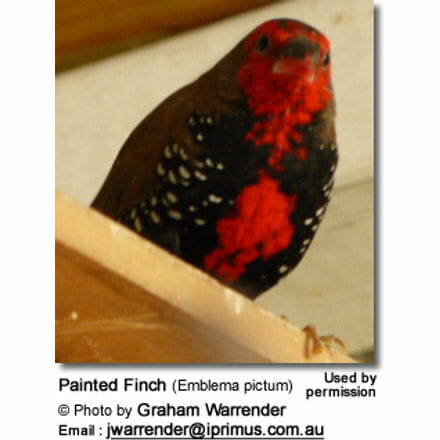 Even though these finches are monogamous, pair bonds are usually not very strong, and they can be paired with other birds at any age. They typically are good parents.

Painted Firetails are generally easy going and good natured. They do well in aviaries with other finches that share their peaceful disposition. However, they get easily stressed with more aggressive species, such as zebra or owl finches.

Captive birds are often not efficient nest builders and even though they will try to construct their nests, they often end up using nests that are ready to go (such as nests built by other finch species or artificial nest boxes).

Nesting options for them are nests constructed in natural low shrubs or dried-bundled branches; as well as artificial nests, such as half open wooden nest boxes. The preferences vary – depending on what they themselves were raised in.

If these finches choose to build their own nests, the male will use long grasses, coconut fiber and other plant matter to build the nest and the female will line it with soft, fine grasses and feathers.

Fostering their eggs / young out to other finch species has proven to be unsuccessful – even in cases where their young look identical to the young of the foster parents. The reason for this appears to be the different begging strategy of the Painted Finch chicks, who will – unlike the chicks of others – remain still and not beg as the foster parents return to the nest to feed the young.

They only open their beaks and move their tongues, and the foster parents end up feeding their own more boisterous chicks. All the Painted Firetail chicks end up starving to death.

Some Painted Finches don’t do well with nest inspections and will abandon the eggs and young; however, most will tolerate them better than most of the other Australian finches.

They are also somewhat delicate and are prone to night frights. They get easily stressed.

Since they spend a substantial amount on the floor, their plumage tends to get dirty and clean bathing water should be available to them. After taking a bath, they like to bask under heat lamps.

The flights need to be kept meticulously clean, and the aviary needs to be dry and warm, or they will get sick rather quickly.

Some breeders keep single pairs in canary-sized breeding cages and they tend to produce more young. But the lack of exercise and natural entertainment is likely to take their toll on them over time, in terms of poorer health and lack of physical fitness.

An aviary (not necessarily planted) is preferable, and these finches do well in a mixed species collection.

If conditions are suitable, they may breed throughout the year, although most breeding occurs in spring to early autumn. It is best for the health of the pair to not allow them to produce more than 3 clutches a year.

Independent young can be left in the aviary with their parents; however, those raised in cages need to be removed when weaned.

There is only a very narrow window of opportunity for the fitting of the leg band, which is when they are about 7 – 10 days old.

Before this time, the band will be too loose and after that, the band won’t fit over their feet. For these finches, one usually uses closed aluminum bands, as split bands won’t stay on the chick’s legs.

Engraved on those bands are usually the hatch year (last two digits) and a serial number which identifies the chick’s parents and facilitates record keeping.

They may also have the initials of the aviary / breeder they came from or from the bird club.

Some breeders choose not to ring their chicks if there is no legal requirement for them to do so. They can sometimes cause injury as chicks get hung up in the nest. Close bands can be purchased through many bird clubs or leg band companies, such as L and M Bird Bands.

Their harsh and loud calls consist of rising, scratchy ‘trut’, ‘check-check’ or ched up, cheddy-up’ and other vocalizations.

The male’s mating song has been described to squeaky windshield wiper.