The Painted Stork (Mycteria leucocephala) is a large wading bird in the stork family. It is found in the wetlands of the plains of tropical Asia south of the Himalayas in South Asia and extending into Southeast Asia.

Their distinctive pink tertial (flight) feathers of the wing are pink giving them their name.

They forage in flocks in shallow waters along rivers or lakes. They immerse their half open beaks in water and sweep them from side to side and snap up their prey of small fish that are sensed by touch.

As they wade along they also stir the water with their feet to flush hiding fish.

They nest colonially in trees, often along with other waterbirds. They only sounds they produce are a weak moan or sounds produced by bill clattering.

They are not migratory and only make short distance movements in some parts of their range in response to food and for breeding. Like other storks, they are often seen soaring on thermals.

This large stork has a heavy yellow bill with a down-curved tip that gives it a resemblance to an ibis. The head of the adult is bare and orange or reddish in colour.

The long tertials are tipped in bright pink and at rest they extend over the back and rump. There is a distinctive black breast band with white scaly markings. The band continues into the underwing coverts and the white tips of the black coverts give it the appearance of white stripes running across the underwing lining.

The rest of the body is whitish in adults and the primaries (longest wing feathers) and secondaries (shorter, upper “arm” feathers) are black with a greenish gloss. The legs are yellowish to red but often appear white due their habit of urohidrosis or defecating on their legs especially when at nest. The short tail is black with a green gloss.

The downy young are mainly whitish with grey bills and blackish facial skin. The juveniles assume a brownish plumage and like most other storks reach breeding condition after two to three years.

Like all storks, they fly with their neck outstretched. They often make use of the late morning thermals to soar in search of foraging areas. 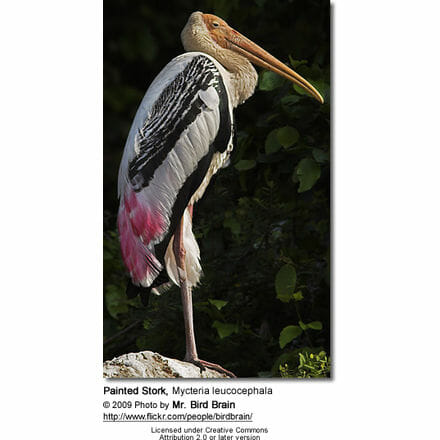 In the past the species has been placed in the genus Ibis, Tantalus and Pseudotantalus. The name Tantalus is derived from Greek mythology. T C Jerdon called it the “Pelican Ibis”.

It was later placed along with the wood-storks to which it shows behavioural similarities and the affinity has been confirmed by sequence based studies.

The Painted Stork is widely distributed over the plains of Asia. They are found south of the Himalayan ranges and are bounded on the west by the Indus river system where they are rare and extend eastwards into Southeast Asia.

They are absent from very dry or desert regions, dense forests and the higher hill regions.

They are rare in most of Kerala and the species appears to have expanded into that region only in the 1990s. Sathasivam, Kumaran (1992). “Painted Stork Mycteria leucocephala (Pennant) in Kerala”. J. Bombay Nat. Hist. Soc. 89 (2): 246.

They are mainly seen on freshwater wetlands although they sometimes forage on the coast. They are resident in most regions but make seasonal movements. Young birds may disperse far from their breeding sites and a juvenile ringed at nest in Keoladeo National Park has been recovered 800 kilometres away in eastern India. 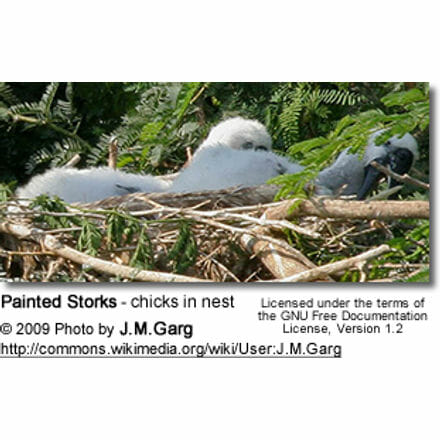 Painted Storks feed in groups in shallow wetlands. The preferred depth is about 12 to 25 cm of water and deeper waters are avoided.

They feed mainly on small fish which they sense by touch while slowly sweeping their half open bill from side to side while it held submerged. They walks slowly and also disturb the water with their feet to flush fish.

They also take frogs and the occassional snake. They forage mainly in the day but may forage late under exceptional conditions. 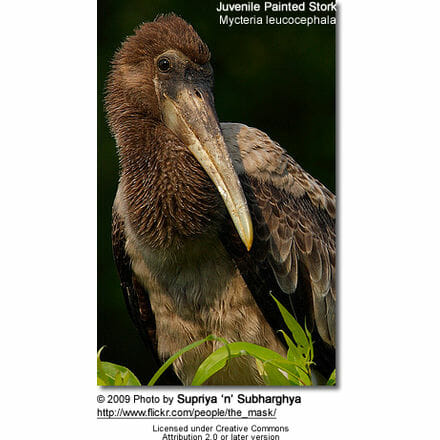 They breed in trees along with other water birds. The platform nests are typically placed in a tree on an island or in an otherwise undisturbed area. The best nesting sites are at the tops of the trees and birds jostle for these locations. In some areas where they have been left undisturbed they nest very close to human habitations.

A lot of variation is noticed in the onset of breeding across sites with the season at Kokrebellur and Edurupattu around January or February but at Telineelapuram, Kundakulam and Tirunelveli the breeding begins around October or November.

The typical clutch varies from 2 to 5 eggs with early breeders having larger clutches.

The incubation period is about a month while the fledging period is nearly two months.

The occasional predidation of chicks by migrant Aquila eagles has been observed. During the mid-day heat, adults will stand at the nest with wings outstretched to shade the chicks.

When feeding chicks they regurgitate fish smaller than 20 cm longs that have been caught. The daily requirement for chicks has been estimated to be about 500 grams made up of about 9 fish fed in two sessions.

The bare red skin on the head is developed when reaching breeding maturity and involves the loss of feathers and the deposition of lipids under the skin. Birds in captivity have been known to live for as many as 28 years.

A bird louse, Ardeicola tantali is described on the basis of a specimen obtained from this species as is a subcutaneous mite, Neottialges kutzeri, of the family Hypoderidae. 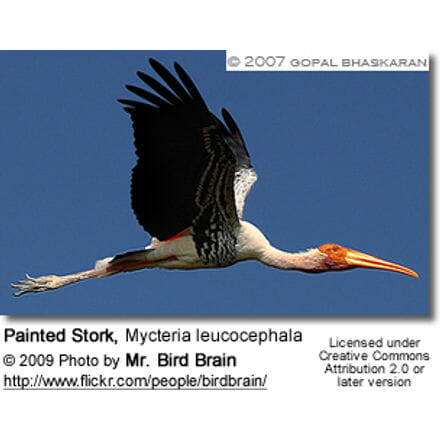 Painted Storks being large and colourful birds and their nesting colonies become centres of tourist interest.

Particularly well-known nest site are those that are close to human settlements and these include the colony in the south Indian villages of Kokrebellur and Veerapura. In Kokrebellur, the birds nest within the trees in the village forming mixed nesting colonies with the Spot-billed Pelican.

The local people provide security to these birds during the brief nesting season when the birds arrive in October leaving the village in a couple of months.

Another well-known colony that has been studied since the 1960s includes one inside the New Delhi Zoological Garden where the birds arrive about 30-40 days after the onset of the Monsoons in Delhi.

This colony is made up of 300 to 600 wild birds that make use of the trees within the artifical islands inside the zoo. Uppalapadu village near Guntur in Andhra Pradesh, Kolleru and Ranganathittu are among the many other breeding colonies known from southern India.

Captive birds are known to breed readily when provided with nesting materials and platforms.

The largest secure population is found in India. Birds in Pakistan along the Indus river system are endangered and chicks at their nests are taken away for the bird trade.

The species was nearly decimated in Thailand while small populations are known from Cambodia and Vietnam.