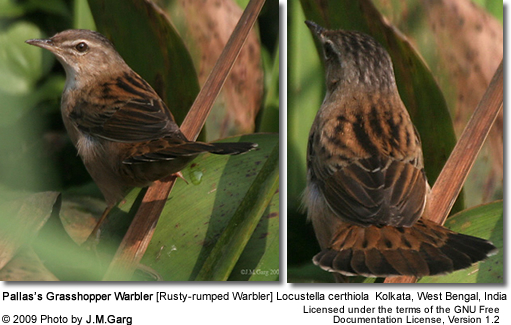 The Pallas’s Grasshopper Warbler, Locustella certhiola, is an Old World warbler in the grass warbler genus Locustella. It breeds in east Asia. It is migratory, wintering from India east to Indonesia.

This bird was named after the German zoologist Peter Simon Pallas.

This small passerine bird is a species found in tall grass with some thicker vegetation, usually close to water in bogs or wet meadows.

This species is a very rare vagrant to western Europe. One of the best places to see this skulking species as a vagrant is Fair Isle, Shetland; for a species that only rarely appears in western Europe, it can be found there with some regularity. This has made it a popular species among UK “twitchers” in whose jargon it is known as “PG Tips”.

The females usually lay 4 to 7 eggs in a nest on the ground in grass.

This is a medium-sized warbler. The adult has a streaked brown back, whitish grey underparts, unstreaked except on the undertail. The sexes are identical, as with most warblers, but young birds are yellower below.

It is very similar to the Grasshopper Warbler, but is slightly larger, has white tips to the tail and tertial feathers, and a warmer brown rump.

This is a skulky species which is very difficult to see except sometimes when singing. It creeps through grass and low foliage.

The song is not the mechanical insect-like reeling produced by the Grasshopper Warbler and some other Locustella warblers, but an inventive Acrocephalus-like melody