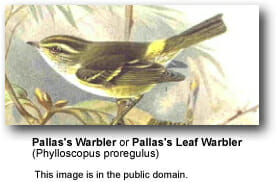 The Pallas’s Warbler or Pallas’s Leaf Warbler (Phylloscopus proregulus) is a leaf warbler which breeds in southern Siberia, Mongolia and parts of Tibet and China. It is strongly migratory and winters in subtropical Asia.

This is a bird of coniferous mountain woodlands. The nest is built in a tree. Like most Old World warblers, this small passerine is insectivorous.

This tiny warbler is prone to vagrancy as far as western Europe in late October and November, despite a 3000 km distance from its breeding grounds. For example, this species occurs in late autumn in Great Britain regularly enough that it is not classified as rare there.

Note that the sixth edition of Clements checklist [3] refers to Pallas’s Grasshopper Warbler, rather than this species, as “Pallas’s Warbler”.

This bird is named after the German zoologist Peter Simon Pallas.

This is one of the smallest warblers, and shares greenish upperparts and off-white underparts with typical leaf warblers. However, this is a little jewel of a bird, with prominent double wing bars, supercilia and crown stripe, and a lemon-yellow rump.

This bird is not shy, but its arboreal life style makes it difficult to observe. It is constantly in motion, and often hovers briefly, like a kinglet. Its song is powerful and Canary-like.