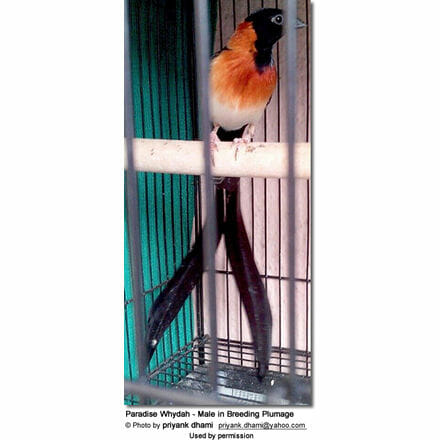 Paradise Whydahs are small, resident (non-migratory) African songbirds. These finches were named for the very long, flowing tails of the breeding males – a plumage detail that is thought to attract females during the breeding season. These finches are also known as Widow Birds because of their darker plumages and, again, their long black tails.

These gregarious birds are often seen in large flocks roosting in tree branches, which is a particuarly spectacular sight during the breeding season, when the males show off their magnificent long tails and glossy plumage.

The Paradise Whydah Finches are generally separated in 5 different species. Formerly they were considered conspecific (one and the same species) and all are sometimes placed in a separate genus: Steganura. 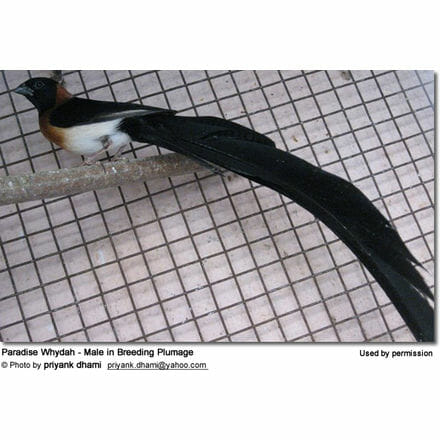 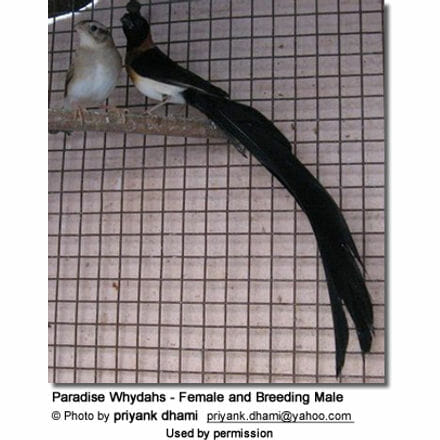 Non-breeding males look like ordinary sparrows for part of the year with a mostly brownish plumage (in different shades), black stripes on the crown, black marks on the face, a deep brown chest and a creamy-colored abdomen. About 3 times a year they molt into their glossy breeding plumage with magnificent long tail feathers, which they lose when the season is over.

Breeding Males develop an attractive nuptial (breeding) plumage, with glossy black feathers on the head, back, wings and tail, a vibrant rust color on the upper chest turning white towards the belly. They grow long tail feathers that can reach a length of 14 inches (36 cm) or more.

The bill is black, and the eyes and feet are blackish, dark grey or pinkish brown.

The upper parts are greyish-brown with blackish streaks. The head is boldly streaked buff and dark brown; except for pale eye stripe and a vertical dark ‘C’ mark over the ears that is open towards the bill. Her chest is grey to buffy colored with some indistinct streaking. The abdomen is and under tail coverts (feathers) are whitish. The wings below are pale grey. The bill is grey, paler on the base of the lower bill.

The breeding male can be identified by his black, chestnut and buff plumage and long, flowing tail.

The female’s plumage is sparrow-like, with a broad whitish stripe down center of her crown.

Immature birds have a plain greyish-brown upper plumage and a grey rump. The face is unmarked except for a slight pale grey eye stripe. The wings and tail are brownish grey. The plumage below is a paler grey, except for a white belly and under tail coverts (feathers). The bill is black, except for brownish markings on the center of the upper bill and at base of the lower bill. The eyes are dark brown. The legs and feet are brownish grey to dark grey.

Paradise Whyadhs feed on large grass seeds, including wild oats, millet and spinifex, as well as taking the occasional termite and grubs. Most foraging is done on the ground or in bushes.

Males will mate with 10 or 12 females, who will lay their eggs into the nests of other finch species, specifically members of the family and often Green-winged Pytilias. However, in doing so, they don’t destroy the hosts’ eggs and simply add 3 – 4 white eggs to the clutch of the hosts, who end up raising both broods. Since the Whydah nestlings are generally larger and louder than the host nestlings, they have an advantage come feeding time.

The incubation time is usually between 11 – 13 days.

Paradise Whydahs are challenging to breed – due to their brood parasitic nature – however, these birds (the males in particular) are quite popular as pets or aviary birds.

One male is usually given several females – 3 to 4 females are usually optimal. If you have more females, you can increase the number of males. However, it is best to have at least three or more males in an aviary. Two males often fight to the death. When one aggressive male is confronted by two or more males, chances of deadly aggression is reduced. Of course, the space has to be large enough to accommodate the number of birds kept in it. If the space is tight, even the most peaceful of all birds can turn aggressive. The females should have access to multiple active nests of suitable hosts. They generally favor birds of the genus Pytilia – often the Green-winged Pytilia nests.

As far as housing is concerned, they should have plenty of room to fly around. These active birds enjoy flying back and forward. During the mating season, males will carry their tails horizontally when flying. Their perches should be placed high enough to accommodate their long tails.

As far as diet is concerned, a quality finch food and millet sprays are adequate. They also like live food – particularly when breeding.

These finches, in particular females, are general silent.

Their occasional calls are described as shrill, metallic ‘teeet’s and their songs as harsh chipping and chattering.

Breeding males often imitate the songs of other birds – in particular those that they have been raised by. These are also often the preferred hosts for their eggs. Females also learn to recognize the song of the foster birds they were raised by and choose mates with that same song.

Their nestlings also mimic the unique gape pattern of the nestlings of the host species.