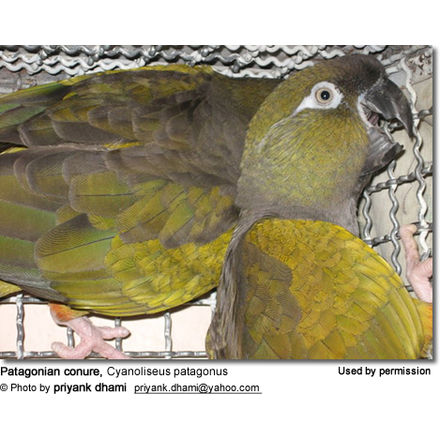 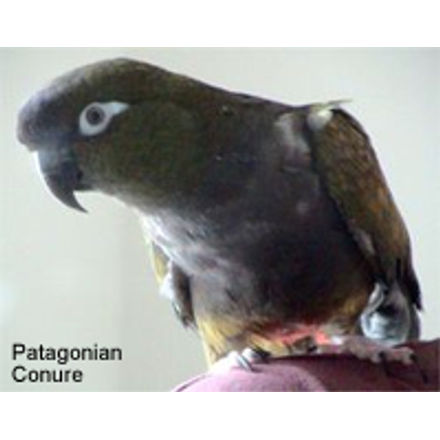 The Patagonian conure, Cyanoliseus patagonus, is a large conure found in the Patagonia region of south-central Argentina and Chile. This conure is also known as the “burrowing parrot,” due to its habit of nesting in holes in the ground. The Patagonian conure has exploded in popularity since the 1990s, leading to an increase in illegal importation which threatens the wild populations

The overall plumage is drab on the top and brighly colored underneath.

Patagonian conures are very playful and rarely remain still. They are true clowns that like to play, dance, climb and tumble for most of the day. Their considerable size, reasonable price, lively personality and good talking abilities makes them very desirable as pets. As other conures, Patagonians tend to be noisy.

They are monomorphic and reach sexual maturity around two years of age. The cock usually sits on or near the nesting box.

These conures are generally fairly easy to breed. One of the challenges might be to find a nestbox / nesting log they will accept. The dimensions or type of nestbox / log varies widely. Their preferences are often guided by past experiences; for example, by the nesting box preferences of their previous owners or by their own memories of the nest box they were raised in themselves. If their nestbox preferences isn’t known and they are not accepting the nestbox that is provided, it would be recommended to offer a choice of sizes and types of logs or nest-boxes placed in various locations within the aviary. That way, the parent birds can make their own choice.  Once a pair has chosen a specific nest-box/log and been successful in it, offer that one to them each breeding season.  Try and keep that one for their exclusive use.  Once a pair has chosen its log or nest-box, the other ones can generally be removed, sanitized and given to other pairs.