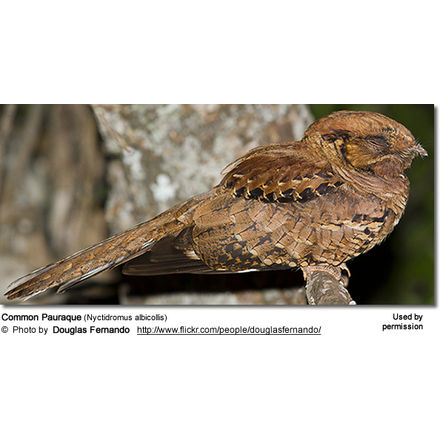 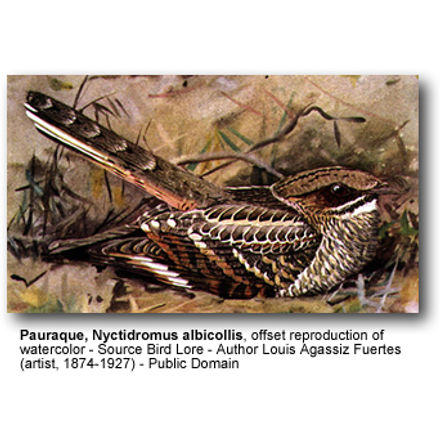 The Common Pauraque (Nyctidromus albicollis) – also often simply referred to as Pauraque — is a common and widespread nightjar that breeds in the warmer parts of the New World (the Americas) from the very southern Texas (USA) southward to northern Argentina. This is one of the most common New World nightjars.

This nightjar, as suggested by the name, is strictly nocturnal. Throughout the day, it typically rest quietly in densely vegetated hiding places – ideally forests. At night, they become active as they hunt flying insects in more open landscapes, such as forest clearings, wetlands and along rivers.

Due to their cryptic appearance, these birds blend perfectly into their habitat and they are very difficult to spot during the daytime, when they are usually hidden away sleeping. They are most easily detected at night when light from car headlights are reflected red from their eyes, as they are sitting on tracks or roads. However, their presence is most often made known by their loud calls given at dusk. 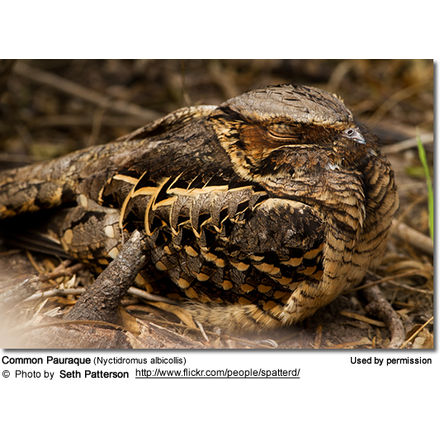 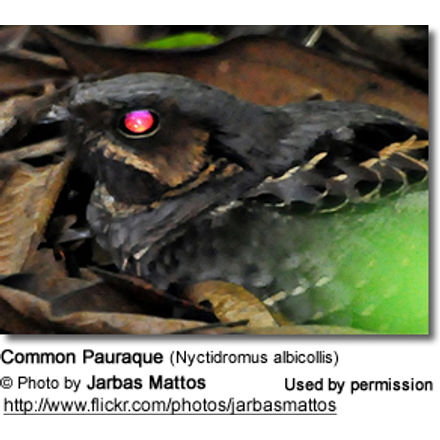 The Common Pauraque occurs from southern Texas through northeastern Mexico and Central America, south to northwestern Peru, Bolivia and northern Argentina (Paraná River region). Most populations are residents throughout the year; however, the subspecies that occurs in the northern range — the Nyctidromus albicollis merrilli – may migrate south to winter in eastern Mexico.

This species has been recorded to occur in the following countries:

They favor more dense vegetation during the day and open habitats at night. 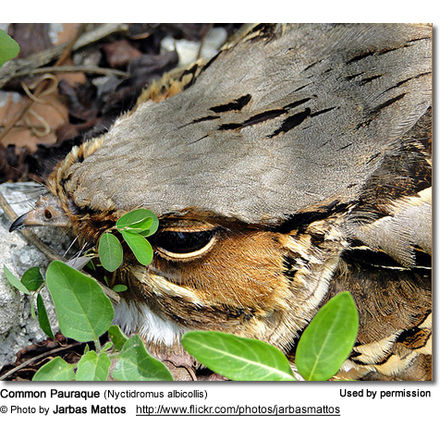 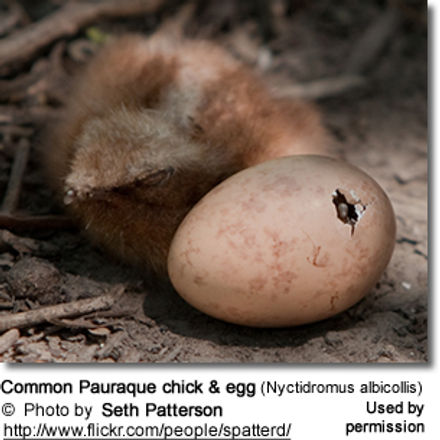 The Pauraque is more terrestrial than most of the other members of the nightjar family. Rather than taking flight when disturbed, it may sometimes run away from danger. Even though their short legs are hardly visible under normal conditions, they can leap nearly two feet off the ground to catch low-flying insects. They also chase prey on the ground.

They are often observed resting on roads and tracks at night, when the light reflected by its eyes can be seen from quite some distance; or they chase flying insects low overhead.

The Master of Camouflage:

The Pauraque benefits from its camouflaging plumage that fits in well with the color of undergrowth and disappears against the ground.

A behavioral defensive technique is to flatten itself against the ground making itself even more “invisible” to potential predators. If the intruder gets too close for its comfort, it will flush from the hunkered-down position.

When perching on a branch, it usually perches length-wise, which also helps its camouflage. 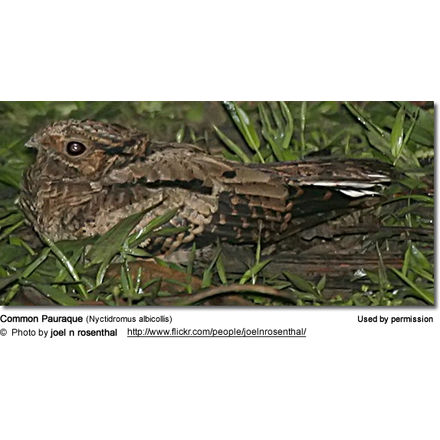 There are seven subspecies that differ in size, greyness of the plumage, and range. 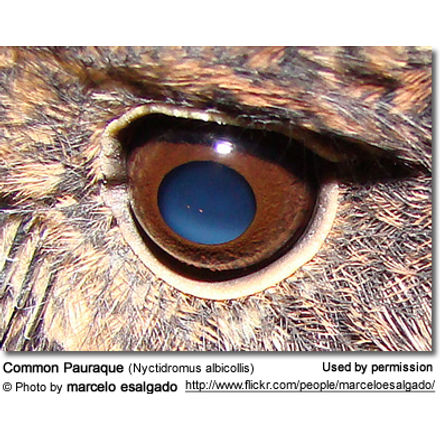 This nightjar has a large head with a tiny bill, giving it a very “cryptic” appearance. Its plumage is patterned in various tones of brown / grey tones and black, which serves as perfect camouflage on the forest floor covered in decaying vegetation and undergrowth. Its feet are tiny for a bird of this size and are hardly ever seen. They have beige ‘eye rings’ and ‘facial stripes’, as well as a greyish chin, all of which contrast with the reddish sides of the face. The under plumage is otherwise mostly dark grey with stripes of beige.

In flight, their long, broad, rounded wings with bold white bars near the tip can be seen. The sides of the tails are also white. 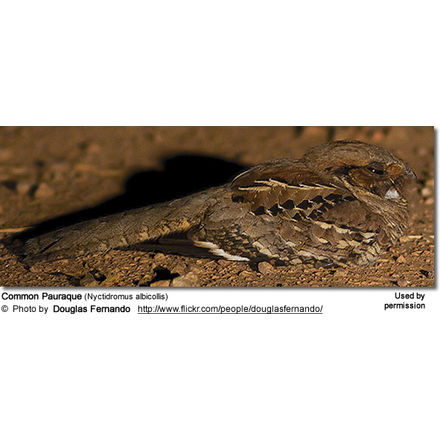 Pauraques hunt flying insects from the ground or from a favorite perch. It feeds on a variety of insects, such as moths, ground beetles, bess beetles, long-horned beetles (Cerambicids), leaf beetles (Chrysomelids), and fireflies (Lampyrids). They catch flying insects mid-air, often by flycatching from a low perch.

They have special physical adaptations that facilitate foraging at night and catching prey in mid-air, for example: 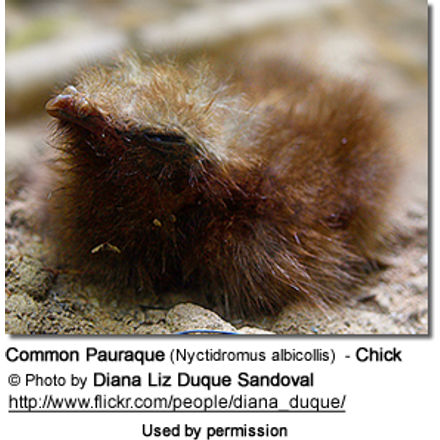 Unlike most other bird species, the Pauraque doesn’t really construct a nest. The eggs are usually simply laid on the ground on fallen leaves near a bush or a tree. A clutch consists of 1 to 3 elongated and elliptical pinkish-colored eggs with buff spotting. The Incubation period ranges from 19 to 20 days and is carried out by both parents.

The hatchlings are covered with light down and can move around soon after hatching. The young often fall prey to smallish mammals, such as cats, dogs and Common Marmosets (small monkeys) – depending on the wildlife that occurs naturally in their area.

At dusk and dawn in particular, you can hear the male’s whistled, rising-falling whe-wheeee-oo whe-wheeee-oo (“who-r-you”) calls in open areas. Their call repertoire also includes a soft puk puk and whip sounds given in the courtship flight as the male flutters over the female.

The female’s call is described as a rapid succession of whip sounds.

The Pauraque song is one of the commonest night sounds within the range of this bird.

The Pauraque is currently not globally threatened and is listed as Species of Least Concern by the International Union for Conservation of Nature (IUCN). This adaptable species will tolerate human disturbance of habitat quite well and actually has benefitted from logging, as it created areas of low and secondary growth that allow these birds to hunt more efficiently. This being said, they will leave areas that are heavily built-up.

As ground nesters, they are vulnerable to predation by cats and dogs, and other mammals, and they have disappeared where these animals are abundant.