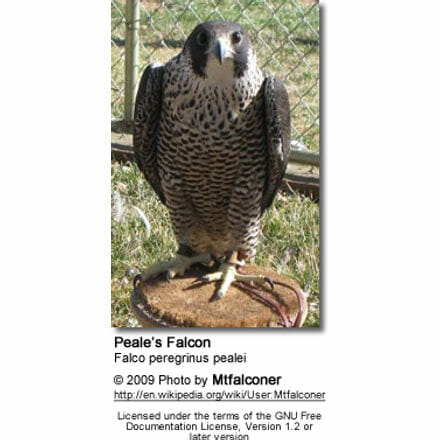 Peale’s Falcon, Falco peregrinus pealei, is a subspecies of the Peregrine Falcon. This race was first identified by the ornithologist Robert Ridgway in 1873, named in honor of Titian Ramsay Peale.

The adults are generally identified by the presence of heavy horizontal barring across their abdomen, large “tear-drop” shaped markings on their breast (more pronounced in the females) extending up into the auriculars, a white, smokey-white, or grayish background color on the breast (as opposed to the salmon to orangish background color on most other subspecies), very broad malar (cheek) stripe to a full dark cap, and wider, stronger mandibles (upper and lower beak) than is commonly seen in the species as a whole.

The breeding range of F. p. pealei is a rather linear one being entirely coastal in orientation. Starting in the western part of the range, the Commander Islands are generally thought to be the extent to which they exist in Russia. Although they are speculatively referenced as nesting on the Kamchatka Peninsula and possibly the northern Kurile Islands, no evidence has been provided to support these locations. From the Commander Islands eastward they are found throughout the Aleutian Islands to the Sanak Islands, Cherni Island, Deer Island, the Pavlof Islands, and the Shumagin Islands. This area constitutes the western sub-population of F. p. pealei and is an estimated 375-580 breeding pairs strong in Alaskan territory and 20-25 pairs in Russian territory. This group has a very uniformely and densely distributed population, with roughly 5–8 miles of coastline between each eyrie on average. This group also has a tendency to be more uniform in morphology.

The Alexander Archipelago, Queen Charlotte Islands, portions of the British Columbia coast, the outer coast of Vancouver Island, and the Olympic Peninsula make up the eastern sub-population of F. p. pealei. The highest density of Peregrines anywhere in the world was recorded on Langara Island in the middle 1950’s. Ten nests being occupied in a single small bay of only 7.5 mi (12 km) of coastline, and a total of 21 nests on the whole island. Unfortunately this astounding concentration of Peregrine falcons was intimately linked to the very robust local seabird population that has declined since the 1950s due to unknown factors. Possible culprits for the decline include introduced non-native predators of seabirds such as rats and raccoons, coupled with possible changes brought on by human activities in the oceanic food chain on which the seabird colonies depend. The Peregrine population of Langara Island is now believed to be about 25% of what it once was. The current population of the eastern sub-group of F. p. pealei is about 20 breeding pairs in Washington, about 100 pairs in British Columbia, and about another 100 pairs in the Alexander Archipelago.

Along the south side of the Alaska Peninsula, the Kodiak Islands, portions of Cook Inlet, the Kenai Peninsula, Prince William Sound, and eastward to Glacier Bay constitutes the central sub-population of F. p. pealei. This area is marked by a decidedly lower population density than either the eastern or western populations. This fact and the slightly different morphology of this sub-group has caused some confusion amongst researchers as to the validity of F. p. pealei existing within this range.

Specifically within this range, the Peale’s Falcon can be found on rough, rocky seashores, sea cliffs, seastacks, islands, islets, and beaches.

The Peale’s falcon is known to concentrate its hunting efforts on Alcids. In fact the subspecies is well known to nest very near seabird colonies for the convenience of close hunting grounds. However this is not necessary for a successful eyrie (nest). In a study on Amchitka Island from 1968-1973, it was found that an average of 18.6 eyries on the island (over the course of the study) were in no close proximity to seabird colonies as no sizable colonies existed on the island. Instead, these large, robust birds fly out to sea to hunt up to 50 miles from land, rather than inland toward the interior. Which is quite an impressive physical feat as they must either eat their prey while flying or carry the prey back to land to perch and then consume it, as Peregrines are not known to be able to rest and stay afloat on water as seabirds do. Preferred species on Amchitka consisted of: Crested Auklet (Aethia cristatella), 26.48% of the diet’s biomass; Ancient Murrelet (Synthliboramphus antiquus), 17.18% of the biomass; and Alcids as a group provided 65.52% of the biomass.

Other important prey species that this specialized population of Peregrines are fond of are Fork-tailed Storm-Petrels, Leach’s Storm-Petrels, and Black-legged Kittiwakes.